Q: What’s worse than one arrow through the leg?

A: Two arrows through the leg!

One of Ronald’s kidnapping victims learns that one the hard way in this week’s Big Sky, which offers the seemingly doomed trio a glimmer of hope before wiping it out like a harmless bystander who just happens to be fly-fishing in the wrong river on the wrong day. (Don’t worry, it’ll make sense in a minute.)

Read on for the highlights of “The Big Rick.”

GOOD MORNING, SUNSHINE | While Ronald and his mother snap at each other in the kitchen in the morning after their snugglefest (“I have a nose for things, and I don’t like the stink!” she says), Officer Legarski’s wife finds him sitting at the table when she comes down from their bedroom. He muses about how in high school, his nickname was “The Big Rick,” not only for his size, but also because he always could be counted on to do the right thing. His wife looks like she, too, has a nose for things. “What did you do?” she wonders. 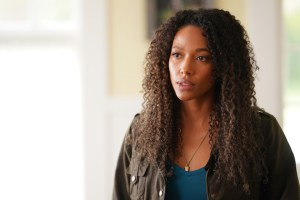 I FOUGHT THE LAW | After getting nowhere with the local sheriff, who isn’t in any rush to go looking for Grace, Danielle or Cody, Cassie meets up with Rick again at The All In. He’s mad she spoke to his ex-wife, and he threatens to handcuff and arrest her, just because. “I am the law in these parts. You really mean to antagonize the law?” he says. She gives it right back to him but also gets out of there quickly upon learning he never got the warrant for the church, because she’s not dumb. 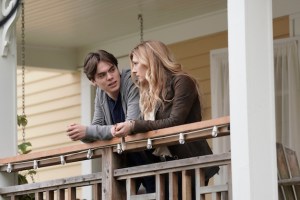 Meanwhile, Jenny talks her way onto the Church of Glory and Transcendence’s property. Aside from being a place where skeevy old guys can hook up with questionably legal young women, it doesn’t seem like anything criminal is happening there. And when the pastor turns over his security camera footage, Jenny confirms what she feared: Cody never showed up there the night Legarski said he did. Back at home, she tells Justin that his dad has disappeared before and wound up fine. But the teen knows he’s probably dead, and he weeps on the porch while Jenny holds him.

Later, Cassie comes by — at Jenny’s request — so they can compare notes. Cassie is convinced that Legarski is involved, despite his squeaky-clean history, so Jenny agrees that they’ll focus on him. After the briefest of emotional check-ins, during which both women admit that they’re not OK, Cassie sobs in her truck and later on, Jenny cries upstairs at her house.

FREEDOM IS MINE | I have been continually impressed by Grace, who possesses a presence of mind that her sister decidedly lacks. And this week is no different: Girlfriend figures out how to free them from their shackles, then marshals Jerrie and Danielle to help kick at a loose spot in the container’s wall until there’s enough of a gap to slip through. But once Grace gets out, they all realize that they needed the combined strength of three sets of feet to make the gap happen; Grace quickly realizes that she’s going to have to proceed solo.

Grace follows some running water to a drain in the barn-like structure where they’re being held captive, determines that the cement was badly poured and chips away at it until she can get through the drain and into the outflow pipe. She’s not that far into the pipe, however, when Ronald shows up and starts belly-crawling after her. Luckily for Grace, the pipe collapses as he’s chasing her, impeding his progress.

Ronald later tells Legarski that she’s probably trapped under the rubble, but Rick knows that if she’s not, they could be in serious trouble. So he grabs an ATV from the Bureau of Land Management property where they’re stashing the women, and takes off to find Grace. I don’t know if I was supposed to laugh at John Carrol Lynch’s line reading when he yells, “Ronald, once again, VERY DISAPPOINTED!,” but I surely did. 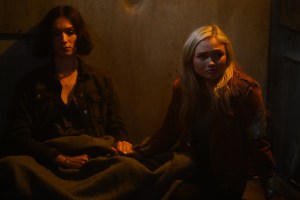 WAITING GAME | While they sit alone in the shipping container, Dani passes the time by quizzing Jerrie about when she knew she was transgender. Jerrie is very kind and forgiving about Dani’s fumbled questions: She answers that she’s always know she was not male, but that when she informed her parents of that fact, they put her into therapy and ultimately disowned her. “Turns out, that love wasn’t quite as unconditional as it was cracked up to be,” she says, adding that she’s lived by herself since she was 14. Dani once more puts herself at the center of the story when she worries that maybe she’s really one of those progressives who think they’re woke but don’t really get it. “Well, there’s hope for you,” Jerrie says, moving over to draw the girl near and offer her a corner of the blanket.

When Ronald opens the door again, though, they’re ready: Jerrie and Dani hit him hard enough to dislodge one of his teeth. But he’s still got that taser, and he uses it to quickly take both of them down. “You… don’t… learn!” he yells as he locks them both up again.

GONE GIRL | Grace loses a shoe in the tunnel collapse but emerges from the pipe otherwise unscathed. She runs into the woods, leaving a trail that Rick has no trouble following. She eventually winds up near a river where she gets the attention of a fly-fisherman who doesn’t quite understand her hysterical ramblings but is willing to help her. As he’s starting to escort her across the river to his car, Legarski pulls out a bow and shoots the dude dead. Then he gets Grace twice in the thigh like she’s a member of Teen Girl Squad — Arrow’d! — before carrying her off to the ATV like she’s a deer carcass.

He wraps the fisherman’s body and dumps it in a swampy hole in the forest, then brings Grace back and puts her in the shipping container himself. Dani and Jerrie are confused at seeing a man in uniform. Isn’t he there to help them? They quickly figure out that’s not the case as he locks them all up. Outside, he tells Ronald to give the women enough food for a few days, because they’re going to have to lay low while they figure out a new plan. He also instructs the younger man to seal up any other possible escape routes in the container’s structure. As Ronald does so, screaming at his captives to be quiet, Grace has. had. enough. “We are just getting started, you sick bastard!” she screams as they pound on the wall from both sides.