Does A Million Little Things‘ Gary have a knack for picking girlfriends who can fill a very specific (and needed!) role in his friend group or what?

Maggie was a therapist who wound up helping Rome deal with his depression. And the ABC drama’s Season 3 premiere made a point of telling us that Darcy, aka the woman with whom Gary is currently smitten, is a physical therapist. She even helped the gang figure out how to install ramps at Eddie and Katherine’s house in order to help the recently injured Mr. Saville get in and out of the house in his wheelchair.

In this Thursday’s episode (10/9c), though, Darcy and Eddie embark on a new relationship: patient and PT. And given how she was Katherine’s buddy long before she knew anyone else in the group, you can bet Darcy has thoughts on Eddie and what he’s done in the past. So, naturally, we hopped on the phone with new series regular Floriana Lima to talk about Darcy’s increasing importance to the Friends of Jon. 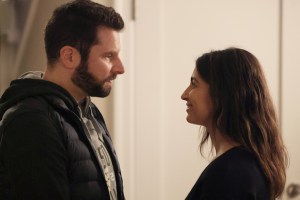 TVLINE | Darcy has worked into the friend group pretty seamlessly. But we did see her experience a little discomfort about not knowing Gary had gone to the airport to see Maggie before she left. As we move into the season, is Maggie’s new place in his life weird at all for Darcy?
Well, yeah, definitely, weird. I mean, imagine being in a new relationship and knowing, “Oh, you just went to go see your ex at the airport?” [Laughs] Yes. So, it was definitely strange. But the cool thing about Darcy is that she’s just really no-nonsense. She’s like, “This is what I’m looking for, and I get that you have a past and I’m okay with it if you say you’re okay with it.” She’s trusting him at this point, and she’s going with the flow. But yeah, it did rub her the wrong way… Throughout the season, Gary’s trying to figure out what life is without Maggie and with this new relationship. I have a kid. So, there’s going to be some challenges. And the airport thing. Yeah, I mean, I don’t know if it might start a trend. I don’t know if I can say that. But yeah, I think Darcy is optimistically cautious.

TVLINE | When I spoke with DJ Nash, he said that Darcy is going to be Eddie’s physical therapist. That seems like it would cause a bit of friction — she was Katherine’s friend first.
Darcy definitely was the shoulder to cry on for Katherine, as we’ve seen, so she knows all of the details of what went down with her and Eddie and what Eddie did. As a best friend she’s definitely like, “I don’t know about this guy.”

She wants to help out and help ease the pain in Katherine’s life right now, so she knows that she’s able to do this for Eddie. She’s truly just doing it for her best friend. She definitely is cautious about Eddie, and might not have the best opinion of him at this point. As you can imagine, if someone did that to your girlfriend. [Laughs] So her intention is to help Katherine. The thing I’ve noticed with Darcy is that she’s just pretty selfless. She’s a helper. She’s a fighter. She will always help her friends and the closest people in her life. So, that’s kind of happening right here. She’s like, “I’ll put my feelings aside to help my friend during this tough time.” So, yeah. Not liking Eddie right now. [Laughs]

TVLINE | Girl, get in line! That man has done so many wrong things, in the short course of all of us knowing him.
I know. I know. [Laughs] It’s really funny that David Giuntoli plays such a despicable man in so many ways, because he is such a lovely human, and filming those scenes with him was such a joy. I mean, not just as a friend, because he and I have become friends, but as an actor. He’s so fun to play with and search for things, and it’s funny that he plays this character. I love it.

TVLINE | We don’t know a ton about Darcy. We know that she was in the military, and we know she is divorced. But will we find out more about her this season? Like for instance, was physical therapy something she got into through the military?
You know, we’ve never really discussed that, DJ and I, how she got into physical therapy. But I personally have thought that she did, through the military, get into that line of work. Like I said before, she’s definitely a helper. She’s always wanted to do that with her life, and help others and yes, we will see a lot of where she’s coming from. There’s some really intense…I wonder what I can say! We will see where everything — like her PTSD, her time in the military — really did affect her life, and what she’s dealing with right now. It’s been pretty fun and actually kind of sad to play, because I’ve learned a lot about veterans and the ones dealing with PTSD and how difficult it is to just go back into normal life. So, hopefully Darcy’s character represents that for a lot of veterans who would be watching our show. You also see how Gary copes with having a new girlfriend who is dealing with something so intense. You’ll be surprised by him. It’s kind of a lovely partnership in many ways.

TVLINE | Is her ex still in the picture?
Darcy’s ex is not in the picture as of now, in terms of [being] on-screen, but yes, he is there. Obviously when Liam’s not around, he is with Stephen, his father. I wonder if he will pop up. I don’t know about that. But they do have a good, amicable relationship.