In case you didn’t get your fill of vegetables at the Thanksgiving table — and really, who wants to waste precious belly real estate on green beans when there’s pie?! —  this week’s special edition of The Masked Singer had you covered.

The Fox singing competition’s Group C Finals featured the talents of Mushroom and Broccoli, as well as Jellyfish, in the run-up to the show’s Super Six. The two performers remaining at the end of the hour went on to join Sun, Popcorn, Crocodile and Seahorse for a run at the Golden Mask.

But who were those elusive entertainers who got to stick around? Read on as we recap the ep. 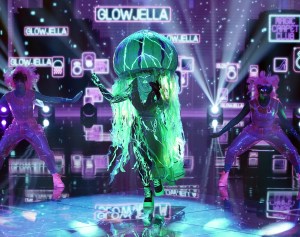 JELLYFISH | The many-tentacled singer’s performance of Dua Lipa’s “Don’t Start Now” was great in terms of pitch and tone, but didn’t it seem just a little choppy? I kept wanting her to connect the musical phrases, and she kept… not doing that. This week marked Group C’s chance to have friends and family offer clues, so Jellyfish’s number-crunching sister showed up to say that Jelly is the “rebel” of their “by-the-book family” but she’s also an overachiever. The on-stage clues this week came out accompanied by platters of roast turkeys (oy), and Jellyfish’s was a message in a bottle that read, “If you find this, you’ll know I’ve never performed on a stage quite like this before.” Other clues included: a fidget spinner, a golden stapler, x’s and o’s on a tic-tac-toe board, and the number 57714. (My guess: Olympic snowboarder Chloe Kim.) 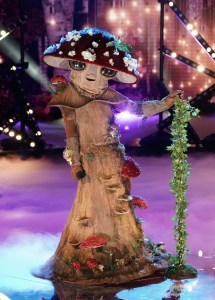 MUSHROOM | “I’m so grateful to have this kind of fun on stage again,” Mushroom told us in the clue package, which quickly tossed to a friend who’s a “government agent.” Clues included: a doll, Mushroom was class president, a 4.0 GPA, a bull, a boxing/wrestling ring and mention of Mushroom’s helping “underprivileged youth.” The fungi’s performance of Katy Perry’s “Unconditionally” was real good, though it did make me have serious second thoughts about my previous guess at Mushroom’s identity — as did the turkey clue, which was in an envelope marked “Do not open! Especially on TV!” and said, “The name that I go by now was not my name when I first sprouted.” (My guess: I have no clue.) 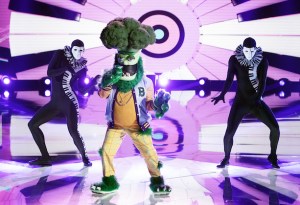 BROCCOLI | Broccoli selected a classic for this week’s performance, singing Bob Seger’s “Old Time Rock & Roll.” Two special ladies in his life called him “truly the ringmaster of our lives” and added that “he’s always been the greatest showman.” His turkey clue was a recipe card (“Do not put your broccoli In the microwave, which was invented after I was born,” he said), while other clues included: a hockey mask, a moose head, beetles and dice. (My guess: singer/songwriter Paul Anka.)

THE SMACKDOWN | Broccoli sang Alabama’s “Take Me Down,” and Mushroom sang Donny Hathaway’s “A Song For You.” (P.S. The latter was SO good.)

THE UNMASKING | When Broccoli was unmasked, he was revealed to be Anka. (Hear what he had to say about his lean, green, mean time on the show here.)

Now it’s your turn. Have any of your guesses changed as we head into the Super Six? Hit the comments and let us know!