And now, the end is near, one performer faces The Masked Singer‘s final curtain. My friends, he’ll say it clear, he’ll state his case of which he’s certain. He’s lived a Season 4 that’s full, he’s traveled paths both soulful and rock-ly. But more, much more than this…

This week’s installment of Fox’s reality-singing competition saw the ouster of the gold chain-wearing crudité, despite an energetic rendition of Bob Seger’s “Old Time Rock & Roll.” (Read a recap of the episode.) On Wednesday, TVLine spoke with the prolific singer/songwriter — whose myriad hits include “Put Your Head on My Shoulder,” “Puppy Love,” “Having My Baby” and, yes, “My Way” — about his Masked tenure. But we couldn’t resist talking about his Gilmore Girls cameo and TikTok (where he’s enjoying an unexpectedly renewed relevance), too.

TVLINE | Thank you so much for your time, especially on this crazy pre-holiday week we’ve got going on.
Well, listen, I’m glad that we’re having fun with it. Where are you, Kim?

TVLINE | I’m in New York City. How about you?
Another New Yorker. I’m fine. We’re in California and bearing with all of this circus and craziness. It’s quite challenging. 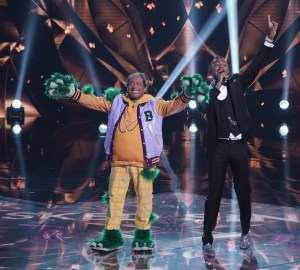 TVLINE | And in the middle of all this, you were a giant head of broccoli.
I was a broccoli, my favorite food. Away I went.

TVLINE | How did that come about?
Well, everything in my business is a phone call. So I got a call, and I was a fan of the show, as is my family. I think it was all about: I got a chance to get out of the house, [to be on] a show I like, I get to sing music — and realizing that I hadn’t been able to. In the 60 years I’ve been doing it, I haven’t been off work this long, and it looks like we’re not going back until next summer. Hopefully. Who knows? I mean, you know the chaos that’s out there. So I said, “Yeah, it’ll be a nice break. It’s a fun show.” The costumes obviously are the big item.

TVLINE | You’ve had a good run in the competition, despite being someone known for their voice and songs. What do you think stopped people from guessing you?
Well, my intent in executing it and understanding I’m going to be in a costume — and if you told me years ago I’d be a broccoli on a program, I would have laughed at you. But in understanding what it was, I wanted to do music that had energy to it. I wanted to put forth a lot of energy. I selected songs that would not be the norm for me. Not that I couldn’t handle them, but I’m dealing with a lot of songs there that I didn’t write. Normally I’m on stage doing “My Way.”

TVLINE | Have you been watching the show as it’s airing?
Oh, yes.

TVLINE | Did you have any inkling about any of the previously unmasked people?
No, I didn’t. I had no idea until the clues started rolling out and some of the judges rang a couple of buttons for me… But when I was doing the show, I had no idea. I think maybe somewhere in the process I sensed [Bob] Saget, but other than that I had no idea.

TVLINE | I hope you’ll indulge me for a minute. We have a lot of Gilmore Girls fans that read our site regularly — do people ever bring up your time on the show?
All the time. Yeah. For a long time. They’re very talented, the writers and producers. I know them, and when it commenced way back when, it was amusing. I’m a fan of that show, too. So are my family. So it was cool. I tour Europe, South America, all over the world. It would always come up from people, except people didn’t even know who I was or what I did. You know, they were young enough. Then only now, with TikTok with “Put Your Head on My Shoulder,” which is so big on there, the record I’ve got with Doja Cat and are they aware of who I am? So it really compounds, Paul Anka on that show and then what I’m doing today, where I get a lot of feedback from young teenagers because of the music.

TVLINE | TikTok — and your fame on it — is so interesting to me. I mean, think about when you started, and you won that contest that brought you to New York City: Could you ever have imagined that one day we’d all be walking around with these machines in our pockets that can produce any kind of music and video, any time you want?
No way. Listen, I didn’t imagine when Jimi Hendrix blew up. You have to understand, there was kind of a set patter of what you did in a studio, how you worked, and with whom you worked. I saw The Beatles first, I went to Europe and I knew them. We weren’t living in a media-driven society back then. I would come home and tell my agents and people about these Beatles, and they’d look at me and go, “No.” Even that we weren’t expecting and then when Hendrix hit? And then tech aspect — even though it’s very much a part of what we’re doing today. I mean, I’m recording an album right now. I just finished [recording with Andrea] Bocelli the other night. I had Olivia Newton-John in the studio in Santa Barbara. It’s not a duets album, but I’ve got some guests on there.

Whoever imagined it would ever come to this point? If I wanted Bocelli on an album, that we’d be doing it [remotely] from a studio in Italy. And we just did Il Divo, and they were in Spain and in New York. So to think that we have something like TikTok just amazes me. I have a 15-year-old boy, and my grandkids, they’re all over it. You know what it is. Then these kids singing “Put Your Head on My Shoulder.” You would never have convinced me years ago that this would resurrect one of my songs. I just look at it and I just shake my head and go with it. Bizarre, you know?

…So it’s quite amazing, but I don’t live in yesterday. My rearview mirror has been tossed. I try to stay very current and work with what it is.

TVLINE | It’s rare to have the type of career longevity in entertainment that you have had.
Well, it’s been a while. We’re getting ready to do the documentary, and I’m sure that Broccoli will be in there [Laughs] …I mean the juxtaposition, what I did with my Broccoli and then hanging with the Rat Pack? It’s real bizarre. I think Sinatra is probably rolling over in his grave right now.