The Mandalorian‘s quest this Friday took him to the high(ly dangerous) seas, before introducing one major character from Star Wars: Clone Wars/Rebels and teasing the arrival of another.

Sufficiently hobbled by its adventures on the ice planet, the Razor Crest puttered along to Trask, where it made an unexpectedly splashy landing, missing the port city’s landing pad. While a Mon Calamari dockworker went about doing “his best” to patch up the dredged ship, Mando and Child watched as Frog Lady reunited with her husband. The husband, as promised, directed Mando to a nearby inn, where — as hungry Baby Yoda literally struggled with his octopus chowder — he was eventually introduced to a shady, squid-headed Quarren who said he could deliver Mando to others like him.

And to be fair, the Quarren did, though perhaps not intentionally. For as the trawler captain attempted a vicious double-cross — lobbing the Child into the maw of a penned-up mamacore, and then also trapping Mando in the cage when he jumped in after — not one but three other Mandalorians jetpacked onto the deck and made quick work of the Quarren crew, before fishing out Mando and Child.

As pleased as Mando was to meet more of his kind, he was just as disappointed to see them remove their helmets and reveal their faces. Mando cries foul, at which point one of them insists, “This armor has been in my family for three generations.” Played by Battlestar Galactica‘s Katee Sackhoff, the group leader introduces herself as Bo-Katan of the Clan Kryze, and says she was in fact born on Mandalore, fought in the purge, and now is “the last of her line.” (Somewhere, Baby Yoda is licking his chops!) In turn, Bo-Katan and colleagues Koska Reeves (Mercedes Varnado aka the WWE’s Sasha Banks) and Axe Woves (Agents of SHIELD‘s Simon Kassianides ) realize that Mando is “a child of the Watch,” which they describe as a “cult of zealots” that broke away to try to reestablish “the ancient way.” Mando scoffs, “There is only one way,” before jetting off with the Child. But when he again runs into Quarren trouble back at the port, Bo-Katan and Co. again save his bacon, after which they all agree to grab a drink.

Bo-Katan explains that she and her friends have been busy seizing black market weapons from here and there on the port, to use to retake her homeworld and then sit on the Mandalore throne. When Mando explains that he is currently quested to reunite the Child with other Jedi, Bo-Katan says she can lead him to one of the kid’s kind — but first, of course, she needs his help in pirating a huge weapons cache from an about-to-depart Imperial freighter. Mando begrudgingly agrees to assist, leaving Baby Yoda with Mr. and Mrs. Frog (after reminding his hungry, hungry ward to “mind your manners, if you know what I’m talking about”).

Mando and the others board the Imperial freighter while it’s just ascending/still in the trawling lane and then easily infiltrate the ship, perturbing its captain (Bosch‘s Titus Welliver). When the foursome get “trapped” by stormtroopers in the cargo control area, it is by design, as they pop open the cargo bay door to suck their adversaries out into the sky. Captain Bosch calls his superior to request backup against this attack, but Moff Gideon says that at this point is not an option, that the captain knows what to do. And after exchanging “Long live the Empire” mantras with Moff Gideon, the captain kills his pilots, takes the wheel and steers the freighter into a kamikaze nosedive. Mando and the others manage to fell one last cluster of stormtroopers and make their way into the cockpit, where the captain swallows a “laser cyanide pill” before he can divulge any intel on the Darksaber that Bo-Katan so desperately seeks. 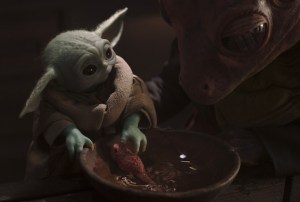 Their mission nonetheless complete, Bo-Katan comes through on her end of the deal by directing Mando to the city of Calodan on the forest planet of Corvus. There, he will find a Jedi named Ahsoka Tano (to very presumably be played by Rosario Dawson).

Mando drags Baby Yoda away from the Frog pad, where the tyke was giddily playing with the firstborn tadpole, and then marvels (not in a good way) at the duct tape-y job that the well-paid Mon Calamari did on the Razor Crest. Even so, the ship manages liftoff, and after saving the Child from attack by a hissing octopussy critter (which the kid proceeded to gulp down), Mando warns that a bumpy ride is ahead, but at least now they know where they are going.

What did you think of the episode “The Heiress”?