Warning: This post contains spoilers for Wednesday’s The Masked Singer.

That old adage is true: Birds of a feather get voted off surreal reality shows together.

So when it came time for The Masked Singer to let one of its acts go last night, the Snow Owls found themselves on the wing. And when it came to the unmasking, the show’s first duo costume was revealed to be country singer Clint Black and his wife, singer/Knots Landing alum Lisa Hartman Black. (Read a full recap here.)

TVLine chatted with the couple, who have been married for 29 years, about taking their partnership inside that egg-on-wheels. Speaking of which…

TVLINE | Were you two controlling the egg’s movements?
CLINT BLACK | We were stumbling around in the egg. [Laughs] It’s really challenging, because you can’t take normal steps. And we would have to move around the stage and move sideways and get in position and all that, and sometimes, when we would get in position, it was like stepping off a treadmill: The heartrate’s up, you almost tripped. It took a while for us all to get coordinated enough to move around in that thing. It was really challenging. And no one had ever done that before. We were the first ones stepping in and trying to move around in it, so it was a learn-as-you-go for all of us.

TVLINE | Did the show approach you as a duo?
LISA HARTMAN BLACK | Yeah, they did. Clint got an email, and we were in the kitchen. We started laughing, and then the laughing started to subside, we said, “Oh, this could really be fun! First duo, it never happened before. Wow, this could be great!” Once we committed, it was full steam ahead.
CLINT BLACK | And then we weren’t laughing. [Laughs] You get that tickle, where you laugh because you think you might actually do it. And then once you decide to do it, it’s “Oh no, what have we done?!” It’s quite different. I don’t know if you can tell, but it’s quite different from anything we’ve ever done. [Laughs] 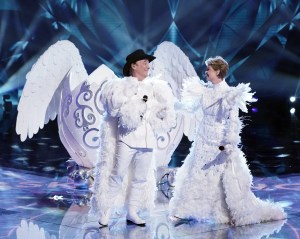 TVLINE | You’ve both been performing for years, but obviously not like this. Even though you have so much experience, talk to me about the challenges of being in the masks.
LISA HARTMAN BLACK | We both, for years like you just said, we worked. Clint tours. That’s what he does. I go out, I get nervous, I settle in. It’s not what I do, but I settle in eventually, thank God. I’m filming, and doing television. But this is something where we were both fish outta water. We were suited up. It was all these elements. It was inside this egg. You’ve got a handbrake, like on a bike. You’ve got one, I’ve got one. Baby steps. “It won’t go to the right! No, we’ve gotta go there! Don’t fall off the stage!” There’s all this stuff going on. So we were just side-by-side partners in crime here. Oh my God. The first time we’ve worked together in a situation like this just leveled it all out. We both were leaning on each other in a way we’ve never experienced before. Right honey? I was so good to you? [Laughs]
CLINT BLACK | It was great to have my partner there. We had each other.
LISA HARTMAN BLACK | We were holding hands a lot in that egg, trust me.
CLINT BLACK | It was challenging in ways you can’t perceive. Just the choosing of the songs, all of the criteria that goes into that. And then once you put on the costume, that’s one thing. Once you put on the mask, the sweating begins immediately. The lenses in your eyeballs fog up and you can’t see anything. You almost can’t breathe. Immediately, it’s a hotbox.
LISA HARTMAN BLACK | A lot of the performers, where the mic is, it’s a screen. It’s incorporated into the design of the mask. So ours was the beak, the little beaky thing, and there as the little screen for the mouth and the eyes. So we would both kind of tilt it back so you could see out of the mouth. But when performance time came, you had to get it back in place. So it spoils you. You can kind of see, and now you can’t see at all! So that’s why we were holding hands a lot.

TVLINE | It took a while for the judges to hone in on you. I feel like we got to every other real-life, country-music partnership before we got to you. Did you have any reactions to any of those other guesses?
LISA HARTMAN BLACK | Oh my God, yes. It was funny, it was flattering. Clint and I both said that Nicole Kidman and Keith Urban, that was a funny one… You don’t know what’s coming at you. You get out there, you do the best you can. They’re all so funny and sweet.
CLINT BLACK | I got confused at one point and I thought, hey, we might be Eugene Levy and Catherine O’Hara. [Laughs]
LISA HARTMAN BLACK | You were delusional from sweating! [Laughs]

TVLINE | Tell me about “‘Til the End of Time,” a song you wrote that is inspired by the show.
CLINT BLACK | [in grandiose voice] The greatest duet ever written? You want to know about that?
LISA HARTMAN BLACK | It’s long overdue. We did the show, and we went, “You know…” And I said, “Why don’t you write?” And he went, “Arrgh.” And he wrote this incredibly beautiful song — I have to brag on you — it’s so beautiful. And the production and everything. It’s a goosebumps song. Go ahead, hon.
CLINT BLACK | It’s one of the favorite things I’ve ever done. I’ve written a few duets for us, and it was hard to get started this time. What am I going to say that’s new? But I did it. I got it done. We recorded it and it came together very quickly. I’m used to taking longer to work on music so I really had to get it done before a bunch of other things we’ve got coming up. We’re going into rehearsals for a live show, first one since the lockdown. We’re going to be doing it at the Ryman on Dec. 2… We almost recorded one of the songs we did on the show, but it really felt better to create something brand new. And the fans have been asking when we’re going to do another duet. So that will be out Dec. 3. We’ll do it live on Dec. 2, and everyone can watch from home. It’s $10 to livestream it. That’s a first for me. If that works, I’m going to start charge people to watch me cook chicken at night. [Laughs]