The coronavirus pandemic hit especially close to home on Monday’s episode of The Good Doctor, when COVID-19 claimed the life of one of St. Bonaventure’s most cherished nurses.

Early on in “Frontline Part 2,” we found out that Morgan had contracted COVID (but had since recovered) after being exposed to a patient in last week’s season opener. Nurse Petringa (played since Season 2 by Karin Konoval) had also been exposed and later died, unable to fend off the virus despite a team of doctors (including Morgan and Lim) working on her.

Elsewhere in the hospital, Claire continued to grieve Melendez, whose spirit was by her side when she returned a precious keepsake to a deceased COVID patient’s Army buddy. Before he left Claire (for good?), Melendez acknowledged that his and Claire’s story had been cut short. He also assured her that her own amazing story was still ahead of her.

On the relationships front, Shaun and Lea were reunited after Lea arrived at Shaun’s place with three consecutive negative COVID tests; Park and Mia decided it was in their best interests not to reconcile; and Glassman and Debbie made peace after quarantine nearly drove a permanent wedge between them.

Below, executive producer David Shore explains the significance of Melendez’s return, the decision to show a frontline worker succumb to the coronavirus, and the reason he has chosen to take the show into a post-COVID world, beginning with Episode 3.

TVLINE | Is that the last we’ll see of Nicholas Gonzalez, or do you have plans to bring Melendez back later this season?
Can’t rule it out, but we have no plans. I don’t want to overpromise in that regard. 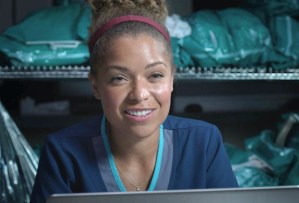 TVLINE | Having had Melendez (or at least a version of Melendez) by her side as she continued to grieve, will Claire be able to pull through in a way that she couldn’t when Breeze died?
Ironically, she is in a more mature place because she had Dr. Melendez at her side for the last few months. I think he helped her through her situation with her mother, and I think his help through [that experience] helped her when [he died]. As he says to her in [Episode 2], this time she’s dealing with it. She’s not running away [from anything].

TVLINE | Is the grieving process as much a part of Claire’s journey this season?
No, it will not be… I think one of the interesting doors that we’ve opened is the Claire and Lim friendship, and how they are going to lean on each other. Both of them have lost something, and both of them have faced great responsibility during these two episodes, so that is something I’m looking forward to embracing, and to people watching. 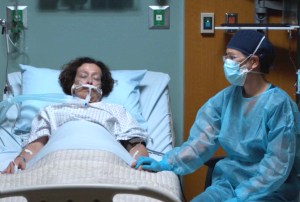 TVLINE | Why did you decide to kill of Nurse Petringa?
It was important to us to show lives lost [during the pandemic]. Look, doctors are heroes. Everybody who works in a hospital is a hero, for crying out loud. We owe them a debt that much more during this time because they are literally risking their lives, every single one of them. And, you know, when you’re doing a dramatic show, if somebody’s risking their life, somebody’s got to pay a price. We wanted to embrace that. 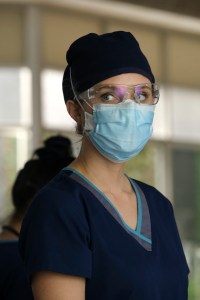 TVLINE | Just to confirm, this is the last episode that will focus on the pandemic, right?
We will allude to it on occasion, but it is a post-COVID world [moving forward]. Our decision in that regard, it was a very difficult decision. In my opinion, there is no simple answer to this one… no perfect answer to this one. If we embrace that COVID is still among us, that it’s still with us and we are still dealing with it, I think that would overshadow all the other stories we could tell. Watching our characters wearing masks as they are dealing with somebody who needs, say, something as serious as brain surgery, would be a distraction. The distancing would be a distraction.

On the other hand, we don’t want to simply say to the world, to the people who are watching, that everything’s back to normal, because it’s not. The real world is not back to normal, and we do not want to be seen as endorsing not wearing masks, or endorsing not social distancing. The compromise we’ve reached is we are going to have a statement [by Freddie Highmore] before upcoming episodes [saying] that this episode takes place in a post-COVID world — that this episode represents our hope for the future. 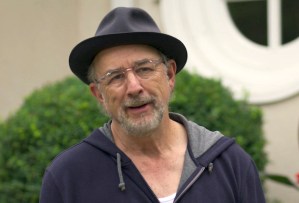 TVLINE | Glassman’s storyline allowed you to isolate 65-year-old Richard Schiff from the rest of the cast. Will his arc this year continue to unfold outside the hospital, to limit Schiff’s exposure to others during the ongoing, real-life pandemic?
We will see him back in the hospital as time goes on, and as we become more comfortable with our own safety precautions [on set]. We won’t lighten them, but we will feel more comfortable with certain things. Part of the decision in that first episode was, yeah, he is an older member of our cast, relatively speaking. We’ve got a basically young cast and older people are more vulnerable, and we were aware of that.

I also think his story was the most relatable story in those two episodes. The vast majority of us have gone through something very similar while we’re at home. We are trapped with somebody we care about, which is delightful and challenging, and we are going to have differences of opinions, and those differences of opinion are on issues that, you know, you didn’t talk about when your were dating or anything like that. We tried to find the humor and the poignancy both in that storyline. 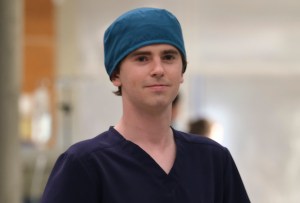 TVLINE | Moving forward, what next steps will we see Shaun and Lea take in their relationship this year?
The challenge this year isn’t “Can I make her like me?” or “Does she like me?” The challenge this year is, “Can I make a relationship work?” It’s all the problems that we have in relationships, and all the mistakes that we [make] in relationships. There are unique challenges to Shaun, but he also has unique skills that allow him to deal with them differently. I always say that the show is at its best when we learn from Shaun, not the other way around.

TVLINE | You also have Shaun in a supervisory role this season. How does that change the dynamic of the show moving forward?
It’s going to be less about Lim and Andrews supervising Shaun, Morgan, Park and Claire. It’s going to be about Shaun, Morgan, Park and Claire supervising new first-year residents that are coming in under their tutelage, and if Shaun is up for that.

What did you think of Part 2 of The Good Doctor‘s Season 4 premiere? And are you happy about the decision to move beyond the pandemic in subsequent episodes? Sound off below.