In Thursday’s Season 4 premiere, Jim Parsons was reunited with Mayim Bialik, who reprised her Big Bang Theory role as Sheldon’s wife, Dr. Amy Farrah Fowler, in a voiceover. As the Cooper family gathered in the backyard to commemorate Sheldon’s graduation from high school, as well as twin sister Missy’s graduation from sixth grade, Sheldon the Narrator (voiced by Parsons) said that “it was the best graduation party I had been to… until we had one for my son, Leonard Cooper.

“I wanted his name to be Leonard Nimoy Cooper, but Amy wouldn’t let me,” he revealed. That’s when Bialik chimed in as Sheldon’s better half and said, “Be lucky I let you name him Leonard.” What followed was the exchange of “I love you’s,” before the episode cut to black.

Below, series co-creator Steve Molaro gives TVLine the inside story on that unexpected Big Bang reunion and that very sweet reveal. 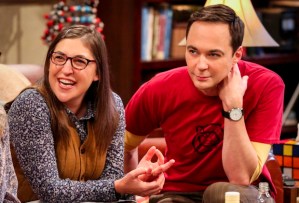 TVLINE | Has Mayim Bialik’s cameo been in the works since earlier this year, when this episode was originally intended as your Season 3 finale?
[Amy’s voiceover] was not in the script yet [pre-pandemic], but Sheldon talking about his son, Leonard Cooper, always was.

TVLINE | So when did you come up with the idea to reunite Sheldon and Amy in this capacity?
Going through the script again, I wanted to add in a joke that I had been thinking about for a long time: that Sheldon might want to name his son Leonard, and give him the middle name Nimoy. Then I was toying with [the idea], “Wouldn’t it be nice to hear Amy say, ‘Just be glad I let you name him Leonard’?” And I thought, “Well, there’s no rules on narration. Let’s put it in and see if Mayim will do it.” I gave Mayim a call and she was happy to [do it]; [she] thought it was really fun. 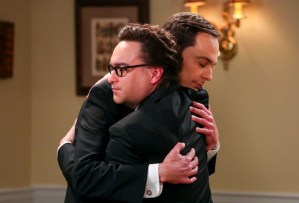 TVLINE | On Big Bang, you never planned too far ahead in terms of story. But with every future reveal on Young Sheldon, it feels like you’re establishing a clearer and clearer picture of what Sheldon’s life looks like after the events of Big Bang‘s 2019 series finale. Has that become part of the goal with this spinoff?
There’s no plan mapped out, but I have my own thoughts about characters and where they are now, and where Sheldon’s at now with Amy. If it’s appropriate to slip something in here and there, I like doing it very much.

TVLINE | This season is supposed to follow Sheldon to college at East Texas Tech. Have new and stringent COVID protocols forced you to temporarily shift storytelling gears? I imagine it’d be awfully hard to shoot some of those campus scenes right now, presumably with a bunch of extras.
We had to start writing before we knew when we were [going back into production], so it seemed easier to not rush to college, and to hang with the Coopers over that summer [before school starts]. Somewhere around Episode 6 is when his college life will begin.

TVLINE | What does a summer at home with the Coopers look like?
I mean, they certainly leave the house. Sheldon and Missy go to Bible camp, Sheldon volunteers as a docent at the train museum… We’re out in the world, we’re just not on a college campus yet. 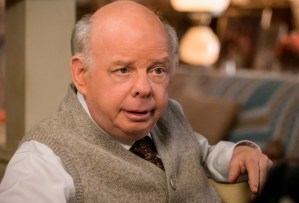 TVLINE | Will new protocols impact how often we see some of the show’s recurring characters, like Craig T. Nelson’s Dale (who reconciled with Connie in the premiere) and Wallace Shawn’s Dr. Sturgis, who teaches at East Texas Tech?
It will affect Dr. Sturgis. Craig T. is here in L.A., and is in a number of upcoming episodes. Wallace Shawn is based in New York. He will be in upcoming episodes, [and we’ll be] shooting pieces in New York to mesh into the show. He will be back a little bit later in the season, but it does present a challenge [right now].

What did you think of Mayim Bialik’s Young Sheldon cameo (and the Season 4 premiere overall)? Weigh in via the following poll, then hit the comments to flesh out your thoughts.