Young Sheldon just got another glimpse at his Big Bang Theory future.

Thursday’s makeshift Season 3 finale revealed that multiple universities — including CalTech — had reached out and expressed interest in the pint-sized genius, which Mary kept secret not only from her son, but from her husband. This led to a rift between Mary and George Sr., who were in disagreement about what was best for Shelly.

In the days that followed, George helped Sheldon put together a video presentation to convince Mary that he should be allowed to enroll in college. As a compromise, Sheldon would complete his undergraduate studies nearby, at East Texas Tech, where he already attends a weekly physics lecture taught by Dr. Sturgis.

Below, series co-creator Steve Molaro discusses Sheldon’s transition to full-time college student, then ponders how Adult Sheldon would handle being self-isolated during the current pandemic (which forced the Big Bang prequel series to scrap its would-be finale).

TVLINE | Big Bang Theory previously established that Sheldon starts college at age 11. Was there any debate in the writers’ room about whether to break from continuity and hold off a while longer?
Any time you make a shift in a show, it’s a little daunting. I had been through it so many times on Big Bang Theory, but if you don’t make those changes and you don’t go for it, I think the bigger risk is stagnating. We know he goes to college, [and] I’m fairly loyal to the Big Bang canon. If it’s going to hurt the show, I’m willing to get a little creative with it, but in this case, I think it was time. We were all ready to do it. Creatively, it’ll be good to get him in a new environment, so [there’s] not too much fear about that.

TVLINE | Did it come as a relief to you that Big Bang never established where Sheldon attended college at 11 years old? All we knew was that he attended grad school at CalTech when he was 14.
Yes. I was like, “I can’t send this kid away from his mom.” I mean, realistically, he’s a little kid. He needs to have his parents around, or at least have access to some sort of family or someone taking care of him, so that worked out. 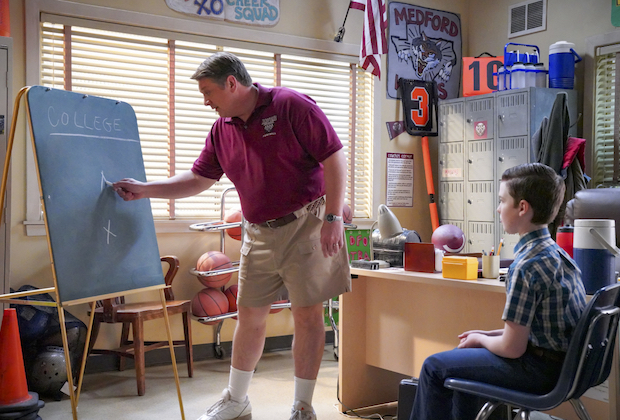 TVLINE | We spoke at length about the Pasadena episode, and the decision to have it be George Sr. who escorted Sheldon to CalTech. Did you see this episode as another opportunity to explore that relationship between father and son in a new light?
I think so. It’s an important relationship in the series of Young Sheldon, and I like seeing them be a team when we can. This was an opportunity for that.

TVLINE | I especially enjoyed watching them plan how they were going to convince Mary to let him attend college. Sheldon was just as into it. He never once mocked Dad for approaching it as he would a high school football game.
Yeah. They were both on the same page and, you know, it’s funny to see Sheldon try to do something sports related. [Laughs] 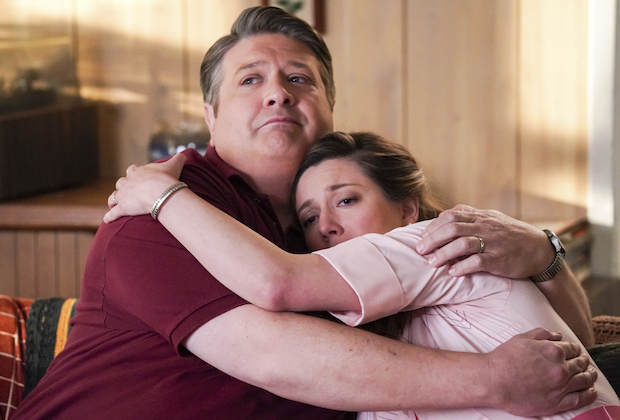 TVLINE | We’ve always known that George and Mary had an imperfect marriage, but it’s not something the show focuses on too much. Was it important to you to play the realness of that fight, once George found out that Mary was keeping things from him?
Yeah, I thought it was important to let them have it out. We have the luxury on this single-camera show to not be quite so joke-driven when we don’t want to be, and this was a chance to really let George and Mary work this out and really have some feelings and really fight about it, and I didn’t want to lighten it up. At one point there was some musical score in one of the cuts that sort of [took] the edge off of their fight, and I asked the composer to take another swing at it, and don’t try to soften what’s happening on the screen — let it go, let it play as actual drama — and I think he did a good job with that. 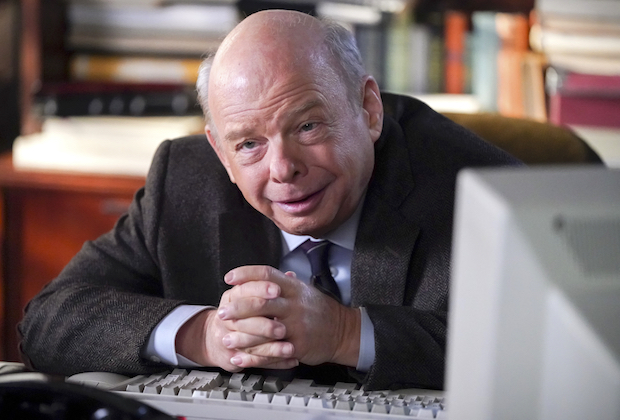 TVLINE | Dr. Sturgis was among those who appeared on Sheldon’s videotape. Should we assume that Meemaw’s ex has forgiven Sheldon for accusing him of plagiarism?
Absolutely. I think it was at the end of [Episode 18] where Ms. Hutchins had gotten hurt and was [recuperating at the Cooper residence] that Sheldon [went] off to apologize to Dr. Sturgis. We didn’t see that phone call, but they buried the hatchet on that, for sure.

TVLINE | Young Sheldon was one of 100+ shows that was forced to halt production due to the coronavirus pandemic, so this was not your intended finale…
We got lucky there. We had a lovely ending planned for 22, but it just worked out that the ending of 21 also is a pretty good finale. That was very fortunate.

TVLINE | Where were you in terms of production when the shut down happened?
We were in the middle of shooting [Episode 22]. We [were] two days in. We sometimes shoot on location at Van Nuys High School, and on the second day of production, they kicked us out. They were like, “You’ve got to go now.” We were trying to get Iain’s stuff done just in case, and we were hoping we could maybe find a way to, you know, rebuild part of what we were doing on the stage the next day, and the superintendent was like, “Get them out now,” and we understood. We left, and that ended up being our last day.

TVLINE | Was Episode 22 going to feature Sheldon’s graduation from high school?
Yes. I think it’s an important moment. I certainly would still like to get a chance to see it. Who knows what the world has in store for any of us, but it’s a big moment for the show and in his life, and the script is written, so let’s do it. That’s my feeling. I will tell you the first two days of it that we shot were remarkable.

TVLINE | It sounds like you intend to use what you already shot for your Season 4 premiere. Is that right?
It hurt that we couldn’t finish that one. It was really turning out to be quite a lovely episode… We don’t have an official plan, but that is something that I am certainly interested in trying to do, yes.

TVLINE | Because Young Sheldon is set in the early ’90s, it’s one of the few shows that will get to ignore the ongoing pandemic. But have you given any thought to how Adult Sheldon, a well-established germaphobe, would handle being quarantined? 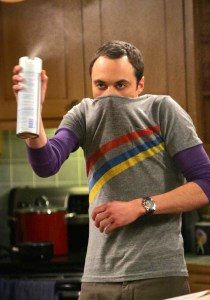 I think he would enjoy it. Chuck [Lorre] and I wrote something on behalf of Adult Sheldon a few weeks ago, and in it, I think we said he was social distancing when it was [still] called “Who’s the weird kid alone in the corner?” [Laughs]… I mean, he was prepared for a zombie invasion, so I think he’d be ready for this. He probably had already pre-hoarded a stockpile of Purell before this was even a national threat.
Human nature can be funny. I find myself, who tends to be a pretty indoors-y type, wishing I could [go outside] more than ever, and I wonder if Sheldon, who is very much an indoor cat, might also be suddenly struck with the idea that maybe outside isn’t so bad.

What did you think of the Young Sheldon finale — and Season 3 overall? Weigh in via the following polls, then hit the comments to flesh out your thoughts.