NCIS: Los Angeles‘ 12th season may be set in a post-pandemic world, but that does not mean the CBS drama itself has been immune to the changes demanded by COVID-safe TV production.

Rather, the importance of social distancing to any degree possible might occasionally “split up” typically paired agents once the high-octane procedural returns this Sunday, Nov. 8 at 8:30/7:30c. 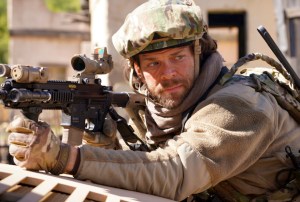 TVLINE | When last we tuned in, Sam told Navy Chief Petty Officer Thomas Argento that he had sullied the SEAL name and his career is now over — and Argento begged to differ. What’s next?
We make good on the promise to see that story through. We follow up that storyline in our second episode of the season, where that case goes to trial and has a few twists and turns within it.

TVLINE | Will Argento avail himself of the considerable D.C. connections he bragged about?
Yes. Yes, he will.

TVLINE | Did you get Catherine Bell back to finish up this storyline?
Unfortunately, no. The plan was to have Cat come back, but she is currently in Calgary doing a Christmas movie, and then she’s back to Toronto for Good Witch. I think she’s not back here [in Los Angeles] until February, so we won’t be able to use Catherine until the new year. But to be honest, we’re so fortunate and happy just to be working. There’s been so many challenges.

TVLINE | If you’re not picking up Argento until the second episode, how much time has lapsed when this season opens?
I tend not to ever want to put an actual time on that because the minute we do, that’s when I get into so much trouble. We’re playing it post-COVID. We’re playing it pretty much as if [the pandemic] is in the past, because it was just too difficult to portray it as it is if our guys aren’t wearing masks. We’re playing it as if we’re on the other side of this, but it’s certainly fresh in the minds of everyone. We had to make a decision one way or the other, and my feeling has always been that our show is sort of an hour of escapism. People want to see life the way they wish it was.

TVLINE | That will explain why we see flying cars in the new season. Because that’s how far in the future it’s got to be.
Exactly. 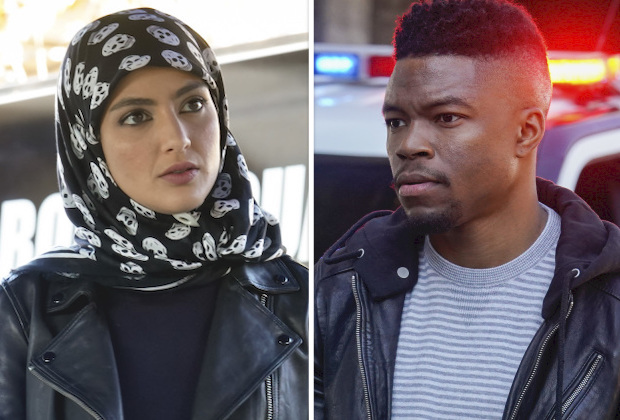 TVLINE | Given Caleb Castille’s promotion to series regular, it sounds like Roundtree decided to say yes to being in the NCIS family.
We are very excited to have Caleb with us. You know, that was a really fun process last year. We decided to look for a younger agent, which we’ve done twice. We did it with Medalion [Rahimi as Fatima] and then we did it with Caleb. We saw so many great, talented young actors, but Caleb was really special and we’re so happy to bring him on. We really wanted to make Roundtree a permanent part of our team, and so we’ve sort of used the hiatus for him to go to FLETC (Federal Law Enforcement Training Centers) and get his NCIS status, and then join us as a full-time member of the team.

TVLINE | Viewers are wondering who he will be partnered with.
You know, this year’s so different. What is clear is that he shares the experience of being “the new guy” with Fatima, and they bond under that sort of relationship, but because of all the challenges of COVID and social distancing and trying to keep our cast and crew safe… the partnerships that we would normally do are somewhat challenging this year. So a lot of the time, he will be teamed up with Fatima, but also a lot of the agents will be working somewhat solo when they can, and that’s just to afford us the safety procedures that we’re trying to implement in order to keep everyone healthy. 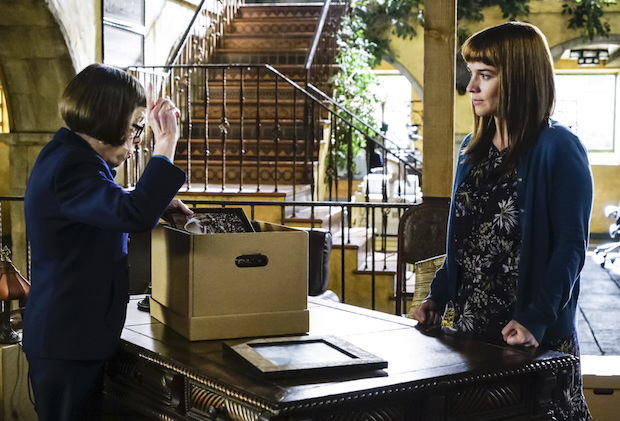 TVLINE | Where stands the oft-teased Hetty transition when we return?
That’s sort of first and foremost in the beginning, because the last we saw with Nell was she wanted to resign. Hetty wasn’t trying to exactly talk her out of it, but suggested that she take her vacation days, since they’re paid for, and think about what she really wants to do — and if she doesn’t hear from Nell by the time her vacation time runs out, she’ll consider her resigned. What we find in the first episode is Nell has come, as per Hetty’s request, to speak with her, and we don’t know exactly what the conversation is going to be about. And when Nell arrives, she finds that Hetty is not there; she’s off on some misadventure. But Hetty calls in and asks Nell — because of the nature of the case that’s involved, which is about a missing Russian bomber — if she would be so kind as to just sort of “run point.” Nell, being the person she is, agrees to it because she thinks Hetty’s in a jam.

TVLINE | And, lemme guess, she winds up liking it!
Over the course of the next few episodes, Hetty’s somewhat incommunicado and Nell figures she’s doing Hetty a solid by staying there, and then the team just finally says, “Nell, do you really think this is just Hetty on vacation…? Or do you think that this is Hetty’s way of letting you realize you can do the job without any of the pressure?” That’s a really big part of the beginning of the season where Nell is sort of in denial, and the question is at what point does she realize that A) she can do the job, B) she’s good at it, and C) she really wants to do it?

TVLINE | During these uncertain times, are you going to have to play “hide the Hetty” even more than usual, to take the best care of Linda Hunt?
That’s just one of the many challenges, but we have found a way to do at least the first episode, which involved actually going and shooting at Linda’s house in her driveway. We’re doing everything we can to keep everyone safe, and Linda is a little extra special in terms of how we have to look out for her. So if Mohammed won’t go to the mountain…

TVLINE | Hey, do whatever you’ve got to do, you know? Just give us dollops of Hetty here and there along the way.
She’s like saffron. She’s expensive, but you don’t need a lot. 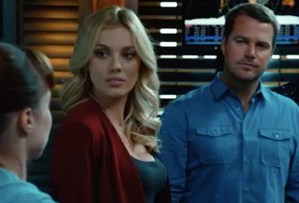 TVLINE | Are there any personal storylines for any of the characters early on in the season?
In some ways, because of what’s happening [with the pandemic] and in terms of rethinking how we shoot things and the challenges of locations, we have focused as much on character, if not more so, than in the past. We have stuff going on with Callen in terms of his relationship with Anna (played by Bar Paly), who takes a job doing a lot of volunteer work, helping out communities that were really hit hard by COVID. That job takes her away from Los Angeles, and during that time Callen really realizes how much he misses her — to the point where he decides maybe it’s time for him to, you know, make things between them “permanent.”

TVLINE | Oh, boy….
Exactly. We’ll have some fun with that because at some point he’ll probably go and talk to Arkady to get his blessing, and the thought of Arkady being his father-in-law is not one he relishes per se.

We also do a lot of stuff with Sam in terms of his relationship with Katherine (played by Moon Bloodgood), and we focus a bit more on his daughter, who is at the same military academy that he went to and trying to get into Annapolis.

We have some fun things to do with Eric Beale, the idea being we won’t see him for a while. What we find out is that last year when he was working for that Silicon Valley company, even though it was a front for a Chinese plan to poach our brightest young minds and the company was kind of bogus, the technology that Eric was working on wasn’t, and he actually becomes very successful because of it. 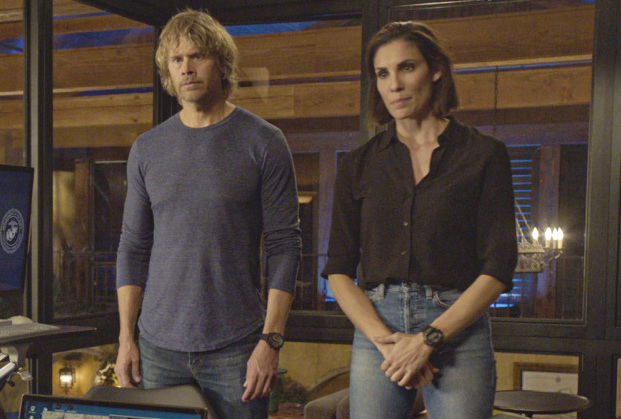 TVLINE | A couple of fans have written my column to say they felt that Kensi and Deeks spent a little too much time at the bar last season, and not enough time at home.
Yeah. Well, that’s going to become a problem as well because what happens is we’re going to find out that because of all the police reform, Deeks’ job with the LAPD, his liaison position, may be in jeopardy, and that’s going to affect his work with us. Also, the bar isn’t doing really great, and they want to buy a house and they want to have kids…. That puts a lot of personal pressure on them, to the point where he has to decide whether he has to close the bar, and then as he loses his job, what’s he going to do next? He’s under a lot of pressure, especially in the first half of the season, and has to make a pretty big decision.

TVLINE | Speaking of police reform, what sort of notes has NCIS: LA been getting from the public safety advisory group CBS Studios partnered with?
We’ve just started [working with them], but I think we’ve always been pretty good about how we portray our characters. It’s just about exploring things more in term of police reforms and how that’s going to affect Deeks, and there’s a lot more of that coming down the line.