The following recap, by the very definition of the word “recap,” contains spoilers from the Season 2 premiere of Disney+’s The Mandalorian.

The Season 2 premiere of The Mandalorian introduced a very familiar lawman sporting some very familiar armor, before eventually teasing the “resurrection” of said armor’s original owner.

The lawman was none other than Justified‘s Timothy Olyphant, playing “the marshal” aka Cobb Vanth, who in keeping with the character’s story in the Star Wars “Aftermath” novels wears the armor of the late Boba Fett as he keeps peace in the Tatooine city of Mos Pelgo.

But by episode’s end, Boba Fett himself was glimpsed, alive and seemingly well, and played by Star Wars alum Temuera Morrison. 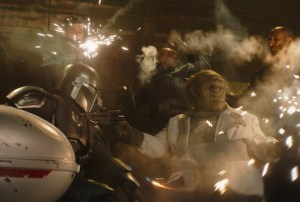 This is the way to the full recap….

The Season 2 premiere opens with Mando, Child in tow, arriving at a grungy, graffiti-riddled town at night, where he informs an establishment’s Twi’lek doorman that he is here to see Gor Koresh. Inside, we realize it’s a fight club, where two Gamorreans are currently slugging it out with sonic scythes. No sooner does Mando tell Gor Koresh (John Leguizamo) that he is looking for other Mandalorians, than he is surrounded by goons with pistols trained on his head. But as the trailer spoiled us, Mando gets out of it (while Baby Yoda smartly retreats into his domed pram) by launching whistling birds. He then chases Gor Koresh outside and strings him up from a lamppost, until he divulges the location of a Mandalorian on Tatooine. Mando is skeptical, saying he has spent time on Tatooine without ever seeing one of his creed. But Koresh insists there is one, in the city of Mos Pelgo.

Arriving on Tatooine, Mando and the Child reunite with Amy Sedaris’ Peli Motto, whose droids give the Razor Crest a once-over. She has an R5 unit project a map that shows where Mos Pelgo is located, seemingly in the middle of nowhere. Motto says the Razor Crest would draw too much attention, so Mando rides a speeder bike to the location, crashing one night with some Tusken Raiders. Once in town, Mando is introduced by a cantina’s barkeep to the resident Mandalorian — aka the marshal, who we see is wearing Boba Fett’s seen-better-days armor. This Cobb Vanth matter-of-factly removes his helmet, explaining that he bought his duds from some Jawas. Mando is in the midst of demanding that Vanth turn over the armor ASAP when a rumbling outside demands their attention. As the few locals begin scampering, we see tremors (but not Tremors) ripple through the sand, until a massive, serpent-like creature — a krayt dragon — eventually rises up to snack on a bantha, and then just as soon slither away. Vanth offers Mando a deal: Help me get rid of this bothersome creature, and you can have my armor.

As they head to where the dragon lives, Vanth explains via flashbacks how after the second Death Star blew up (which would have been five or so years ago), a mining collective moved in and seized Mos Pelgo, turning it into a slave camp overnight. In the course of fleeing, Cobb lucked upon a cache of silicax (sp?) crystals, which he wound up trading to the Jawas who rescued him for the found Mandalorian armor. He then donned the armor to storm the cantina and reclaim his town. Mando and Vanth pull over upon spotting spiky lizard dog things, the pets of Tusken Raiders. Vanth is no fan of Sand People (they have raided his town and killed some locals), but Mando negotiates an uneasy truce, explaining that they want the dragon slayed as well. Ultimately it is decided that with the people of Mos Pelgo offering back-up, they may have a chance.

The plan is to seed the ground outside the dragon’s cave (an abandoned Sarlacc pit) with explosives, then wake up and draw out the beast, until its vulnerable belly is exposed. That is a bit easier said than done, as the creature begins to retreat upon snacking on one Sand Person. But the makeshift army antagonizes the dragon with gunfire and harpoons, causing it to slither out further. Vanth then detonates the explosives… but it doesn’t get the job done. Rather, amid much dust and smoke, the dragon bursts through the nearby hilltop, where Mando and Vanth taunt it further. When the dragon later sneaks up on the group from behind, Mando baits it with a bantha that is strapped with explosives, but due to circumstances must let it gobble up himself as well. Soon after, though, we see that Mando has used his long gun to taser the beast’s mouth, keeping him safe long enough to blow up the bantha that’s now in its belly. 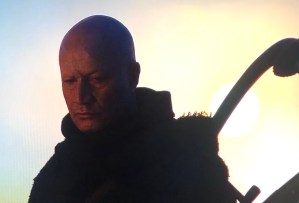 As the Tusken Raiders excitedly ransack the dragon’s skeleton, guts and ichor, Vanth tells Mando he hopes their paths cross again. He turns over the promised armor, noting, “Tell your people I wasn’t one who broke that!” Mando with Child then speeds away on their bike, as the maskless Boba Fett watches from atop a dune.

What did you think of The Mandalorian‘s awaited, 47-minute return?