The Helstrom family has a devil of a time in the premiere of their eponymous Hulu series — and this is just the Satanic start.

In a moment, we’ll want to hear what you think of Hulu’s new supernatural drama, based on the Marvel comic of the same name. But first, a recap:

On a rainy night in Portland, Ore., Dr. Louise Hastings (played by June Carryl, Mindhunter) is working late in her office at St. Teresa’s psychiatric institution. All of a sudden, a candle on her desk blows out, her door creaks open and her computer keyboard begins to type “NO MERCY” over and over of its own accord. When all of the glass in the cabinet behind her suddenly shatters, she seems more angry than afraid, and marches down to the ward.

That’s where she learns, via a giant puddle of blood that leads to a murdered security guard stuffed in a closet, that some of her patients have escaped. She orders her staff to lock down the facility immediately. 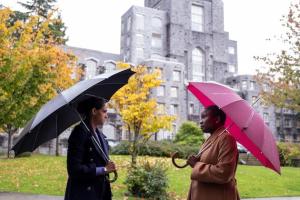 Elsewhere, nun-in-training Gabriella Rosetti (Ariana Guerra, Raising Dion) and an over-it college professor/exorcist Daimon Helstrom (Tom Austen, The Royals) attend to a family whose young son seems to be possessed by a demon. Daimon quickly figures out that the kid is faking, particularly when he pretends to be burned by what he thinks is holy water (but which is really from the tap in the downstairs bedroom). “Even if it were real — Latin, holy water — they used to be the secrets of the trade,” Daimon tells the boy. “But now, thanks to movies, TV, the Internet, they’re just tropes.” When the angry kid goes to punch Daimon, some force stops him. Then all the furniture in the room moves, and a circle of fire ignites around the pair, then just as quickly goes out. As the cowed boy realizes, Daimon is packing some serious mystical power.

After an antiquities auction in San Francisco, Ana Helstrom (Sydney Lemmon, Fear the Walking Dead) chats up a rich venture capitalist who paid millions for Napoleon’s sword. As they flirt on the roof of the building where the auction was held, she reveals that she put the item up to lure him out into public, then she calls him a “thief” and says she knows his secrets. “You get off on stealing the light from women’s eyes,” she says calmly, placing a hand on his chest as scenes of him choking a woman to death flash in Ana’s mind. “Seven to be exact.” So she holds her palm over his chest, seemingly sucking the life force out of him, then whispers, “Try not to hit anyone when you land” before she taps him on the shoulder, sending him tumbling off the roof. Her assistant Chris Yen (Alain Uy, The Passage) works damage control, keeping her name and face separate from the murder.

Meanwhile, in Colma, Calif., the two St. Teresa’s patients, along with a nurse they conned into coming with them, break into a tomb in a graveyard. There are ancient markings, there are scary-looking bones, and eventually something powerful and seriously bad kills the nurse in very bloody fashion.

Dr. Hastings visits Daimon on campus, tells him about the escape and infers that a mysterious “her” is behind it. “I can’t go toe-to-toe with her, Daimon,” Louise says. “She only responds to you.” So Damion goes to see his mother Victoria (Elizabeth Marvel, Homeland), who has been a patient at the facility for decades. She’s unresponsive…  until the demon possessing her starts taunting him about how his mother never wanted him. The entity eventually admits to sending the escapees “to see an old friend,” but won’t say any more.

Turns out, Ana’s associate Cartaker (Robert Wisdom, Nashville) — who scours the world looking for items to auction — brings her to the secret cave under the Colma tomb. Nothing is left of the patients, but there is the skeleton of what Taker identifies as a keeper demon: “The kind of demon that’s guarding something very powerful, something that’s now free.” For the first time since we’ve met her, she looks alarmed: “You don’t think it’s him?” Taker says he’s not sure, since whoever they’re talking about “has taken a lot of forms over the ages, regenerated himself.” She doesn’t get any vibes from the keeper, but it does start whispering to her in her mind, so she takes its skull with her. Taker later finds a scrap of the patients’ clothing with St. Teresa’s marked on it.

Back at St. Teresa’s, Gabriella is annoyed that neither Daimon nor Dr. Hastings seems to think that she should see Victoria for herself. So Louise encourages the younger woman to read a file she left on her desk. When Gabriella does, she learns that Daimon and Ana’s father was a prolific serial killer who at one point kidnapped Ana. Louise later points out that Victoria isn’t mad, she’s cursed “for knowing the truth” about Mr. Helstrom, and that Ana and Daimon are estranged. Then Dr. Hastings has a coughing fit (which ends with blood in her palm, which is never good) and steps out.

Gabriella takes advantage of the doc’s absence to go see Victoria; of course, the demon is slamming her up against walls and the ceiling within moments of Gabriella’s entering the cell. Thankfully, Daimon shows up in time to get between the possessed woman and Gabriella and Louise; Victoria breaks through long enough to warn them to run, and they take off, leaving her behind in the cell. 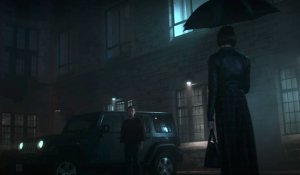 In Louise’s office after, they process what happened. Daimon lets them know that the symbol that’s on the wall in Victoria’s cell is an ideogram that means “consumption.” On his way to his car afterward, he senses something in the air and turns around: Ana is there. “Please tell me the bitch is dead,” she says flatly.

Elsewhere, a long-haul trucker exits a convenience store and finds a man sitting in his rig. It’s the nurse, and we see that half of his face is missing. Then he launches himself at the trucker, and the scene goes to black.