Wednesday’s premiere of The Amazing Race not only jump-started the long-dormant series, but also marked a mega milestone in the show’s run: The Race has now traveled more than one million miles around the globe. Talk about a serious stamp in the passport! (Read what host Phil Keoghan had to say about this and more in our recent interview.)

While a certain pandemic unfortunately delayed Season 33’s production mid-filming, we luckily have 11 hungry new teams and a brand new adventure here to tide us over. So what countries did this season’s racers jet to, and which team was last to the mat in the premiere? Let’s recap.

At the top of the episode, we meet former NFL pros DeAngelo and Gary, who tell us that “everything we do is about winning”; Kaylynn and Haley, two street-smart ladies who say they’re from “the school of the hard knocks”; and Leo and Alana, two “nerd types” who look forward to being underestimated. (For a full refresher of who’s who, click here.)

The newbs meet up with Phil at L.A.’s Hollywood Bowl and immediately start sizing each other up. The host tells them they’re about to embark on a 33,000-mile quest that will change their lives. “The world is waiting for you,” he says. “Good luck!”

AND THEY’RE OFF… | Clue #1 tells them to make their way to Trinidad, an island off the coast of northeastern Venezuela. Upon arrival, the teams immediately hop into cabs in search of a 24-hour fruit stand. The next clue instructs them to roll oil drums a quarter mile down the street and deliver them to a Saturday night street party. There, in a sea of hundreds of partygoers, they must find a costumed man holding their next clue.

Short statures and heavy backpacks increase the difficulty for this task, so obviously the super-jacked DeAngelo and Gary are the first ones to arrive to the Carnivale celebration. They locate their next clue, which comes armed with tickets to the neighboring island of Tobago. Jerry and Frank, and Riley and Maddison aren’t far behind. Coming in last on the challenge is the brother/sister combo, Eswar and Aparna, which Eswar calls “demoralizing.” 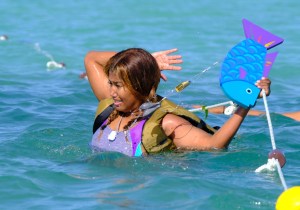 … TO TOBAGO! | Flight #1 gives some of the racers a 30-minute advantage. They hop into taxis looking for Swallows Beach, where they must travel by boat to Nylon Pool in search for a painted fish that matches the one in their boat. Chee and Hung make a grave mistake, remembering a four-digit lock combination, but not the fish’s fin colors. They’re not the only ones to goof up: Jerry and Frank forget to even look at their combination.

Michelle and Victoria are first to unlock the matching fish and receive the next clue, telling them to head to Pigeon Point; Riley and Maddison are hot on their trail.

ROAD BLOCK | “Who thinks they can steel a show?” Players must join a band of drummers and play a portion of “Banana Boat Song (Day-O)” on a steelpan. If they play the right notes and keep the rhythm, they’ll receive their next clue. While most of the teams get into the groove, Olympians Kellie and LaVonne are starting to panic. They eventually find their fish back at the Pool, but it’s going to take a lot for them to catch up and avoid elimination.

Michelle takes her first stab at the steel drum performance and fails. Chee gives it a whirl and kills it, as if he’s been playing the island instrument his entire life. With that, Chee and Hung commandeer the lead. They’re then told to hightail it to Buccoo, race with a goat and meet Phil at the first Pit Stop.

Meanwhile, Michelle’s second attempt is a success, and following a montage of wrong notes, silly antics and dwindling patience, Maddison also gets the green light. 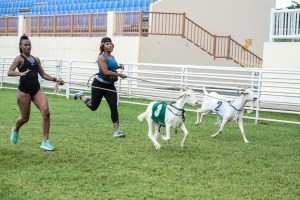 PIT STOP | Michelle’s goat takes off without her as she spills to the ground. Hung also makes a crash landing, though hers is on the finish mat, making her and Chee the official Leg 1 winners! Phil tells them to rip and read their next clue, and they’re heading to Colombia. Michelle and Victoria then seal their second-place finish.

The last trio of teams struggling with the Road Block include Nathan and Cody, the Olympians and the footballers. No one seems to be able to carry the tune, until Gary fiiinally pulls it out and gets the job done, leaving Kellie and Cody in his wake.

WHO WAS ELIMINATED? | The four professional athletes finish in ninth and tenth place, leaving Nathan and Cody in dead last. Unfortunately for them, this is an elimination leg, and their race has sadly come to an end.

Were you sad to see Nathan and Cody go? Grade the episode, then root for your favorites in the Comments below!