It’s been a long 16 months since Colin Guinn and Christie Woods were crowned the victors of the last Amazing Race, but the wait for the next globetrotting relay is finally over.

On Wednesday, October 14 (at 9/8c on CBS), host Phil Keoghan kicks off a brand new circuit, as 11 fresh duos take off from the legendary Hollywood Bowl in Los Angeles en route toward an exciting race around the world. And if the thrill of exploring the globe with a loved one isn’t enough, the $1 million prize should certainly motivate them!

Ahead of the premiere’s starting gun, we spoke to Keoghan about the challenges that lie ahead for the racers, the beauty of watching the Race during a pandemic and what he believes is “the core of what Race is about.”

TVLINE | Congratulations on racing a million miles around the world. What a milestone!
I was trying to put it into perspective, so I Googled and saw that going to the moon is 230-something-thousand miles. So it’s like going to the moon and back twice!

The million miles rolled up while we were flying over the Amazon in the middle of the night, and to be honest with you, there was no official celebration because we were all so tired. It’s only since we got back that we’ve put the whole thing into perspective and realized, wow, this show has been going that long! It’s incredible.

TVLINE | This season is premiering at a very unique time. Not many people are traveling at all, let alone leaving the country. Have you given any thought to the fact that viewers will be living vicariously through the Race this season?
I think you hit the nail on the head. I haven’t been on a plane since we were sent home from shooting The Amazing Race 33. It’s the longest I’ve ever been in one place in my entire career. But it’s not just me of course, the entire world is shut down. It’s an opportunity for us to give people the ability to vicariously travel the world. People can sit in a comfortable chair in the safety of their homes and jet away, looking at a time before COVID. We’re hoping this is true escapism for our fans.

TVLINE | What do the racers have ahead of them in the premiere episode?
The beginning of this season is extremely difficult. We left L.A., flew to Trinidad, then off the plane, the teams are right into the challenges that night. Then, we head off to Tobago, a beautiful little island that’s like a sister island to Trinidad. From there we head to South America, and that’s where we get right into the heart of the Amazon, where there are still indigenous tribes living along the river banks, living off the land.

I’m really excited about us getting to the Caribbean. I grew up in Antigua for eight years as a kid. I just love the Caribbean culture. I love steel drums, cricket, the beaches, the people, the food. Particularly, like in Trinidad, the food has such a mix of culture, of Indian, South American and African influence, so it’s really a wonderful melting pot.

TVLINE | Was there a particular country or road block that proved most difficult this season?
The biggest hurdle is just coping with the extreme changes [the contestants] face every single day because they don’t know where they’re going or what they’re doing. When you’re going from a tropical island to the middle of a jungle to a freezing cold country like Kazakhstan in the winter, the challenge is just the extremes. They’re literally going from the furnace to the freezer in a 24-hour period, jetlagged. Twelve shows in 24 days does weird things to the mind and it really is the complete opposite experience from a stage show set in a studio somewhere. What we’re actually doing to our contestants is pushing them to the absolute limits.

We have a couple professional athletes, but that’s not a ticket for winning this race. Just because you are hyper-competitive like Jerry, who’s played in the NBA and is used to competing at a very high level, that does not automatically qualify you to make it into the Final 3 or win this race.

TVLINE | Season 31 introduced us to the U-Turn Vote. Will there be any new twists to the game this season?
We pride ourselves in casting diversity on our show. We want to see all skin colors, all different backgrounds, different sexual preferences, people who are in love, siblings, father-son relationships… that’s really the key to what makes this show work. Adding twists and turns is one thing, but ultimately the show works because of new places and amazing people. That’s what separates one season from another. We don’t have to jump the shark because we have everything we need to make it new and different. We could add all kinds of craziness to the show but ultimately, I don’t think that’s what the fans turn up for. Amazing people, going to amazing places, doing amazing things. That’s the core of what Race is about.

TVLINE | Day 1, at the starting mat, which teams did you think were the ones to watch out for? 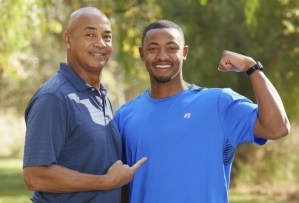 There’s a group of us in production that does a little $1 bet. We all throw a dollar in a hat, and none of us have ever been 100 percent right, which I think speaks to the fact that there are so many variables on the show. But to me, when I look out at the cast in front of me, I’m looking at the dynamics I want to watch. Meaning, I want them to stay because I want to see that relationship grow and see what happens to it. The one relationship I was most keen to watch was Jerry and Frank, the father and son, because I have a very strong relationship with my dad. They’ve got some things they want to sort out. For Frank, he felt like he could never live up to his dad’s expectations. He’s a high achiever, so he’s vying for his dad’s attention like most sons do.

I also have a close connection with my sister, so I love Aparna and Eswar. I love that dynamic where one is taking more of a leadership role. But sometimes, that can turn on the Race.

When you look at Kaylynn and Haley — who have really come up through the school of hard knocks, and as teenagers, really struggled to be super independent at a very early age — you maybe think, “Two beautiful young women, how tough could they be? How savvy are they?” You never want to judge a book by its cover in life, and that, to me, speaks to what The Amazing Race is all about.

Then you look at Michelle and Victoria. They’re very spicy, particularly Michelle who speaks her mind and doesn’t hold back. I love people who have no filter!

TVLINE | They’re reality TV gold!
Oh, yeah! Some of the things out of her mouth really are gold!

TVLINE | Before I let you go, you were in production for Season 33 when COVID-19 hit. Is there any update on when that might resume?
There are just so many unknowns. Our Number 1 priority is the safety of the cast, so until we can guarantee everyone’s safety, we won’t be going. That’s why we headed home in the first place. We worry about all of them, it’s our Number 1 concern. I don’t worry about the cast doing any of our challenges, I worry more about the real-world influences, and in this case, it happens to be COVID. I would hope that in early 2021 we’re in a place where maybe we have a much better idea, because we’re all itching to get back out, and so are our fans.