Warning: This post contains spoilers for The Haunting of Bly Manor.

The Haunting of Hill House alum Oliver Jackson-Cohen plays the slick valet, a role that at first appears to be miles away from his part in a previous Mike Flanagan series: Hill House‘s tormented Luke Crain, whose childhood traumas followed him into an adulthood plagued by drug addiction.

But as Hill House‘s follow-up plays out, we learn that Peter also has serious darkness in his history — and things don’t look much brighter in his present or future, for that matter. And when TVLine talked with Jackson-Cohen about the new season, we definitely delved into the terrible things in Peter’s past that led him to steal from his employer and manipulate a woman he claimed to love. But along the way we also discussed the Bly Manor role he almost played, that intense monologue in Episode 7 and how one of Bly’s resident ghosts actually scared the bejesus out of him while shooting a scene. 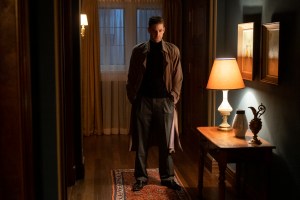 TVLINE | When I was watching the episodes, at first I thought, “Oh, look: Oliver Jackson-Cohen gets to be the villain this time and doesn’t have to cry every episode like last season.” But little did I know what would befall him. Did you know everything about his arc before you took the part?
Do you know, I didn’t? Mike called me as he stood outside the Netflix offices. This was last February, and he said, “Hey, it’s Mike,” and I thought, Who the f–k is Mike? And he said, “Mike Flanagan.” And I’m like, “Oh, my God. Hi.” And he said, “So, I’ve got this idea of doing Turn of the Screw. Do you want to be in it?” And I said, “Yeah. What is it?” And he went, “We don’t really know yet, but it’ll be sort of between these two characters you can choose from.” He said, “I’m just about to pitch it to Netflix, and I want you and Victoria [Pedretti] to come and do it.” And I’m like, “Sign me up.”

So, I kind of sort of went in blindly, not really knowing. It was actually an incredible process because then, as the writers’ room opened up, I went in and then Mike had sort of pitched the entire idea of what the show was going to be. There was a tossup between I would either play the groundskeeper or the valet, which ended being [Peter] Quint. I’d sort of been talked through the entire arc of the season of the actual story, and then the Quint part, he said, “He’s the villain.” And I went, “Great!”

And then we started talking. I said, OK, if you give me the villain, he can’t just be one-note. It’s interesting to explore why he’s the villain. So we worked together on figuring out who this person was. I came to [Flanagan] with a bunch of ideas, and then he would come with ideas, and it was sort of a collaboration on the Quint role. 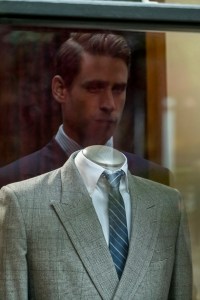 I was very interested in [whether] he is going to be this villain and he’s going to be this sort of arrogant…you know, he’s a product of the ’80s. He’s one of those kind of men from the ’80s that puts on a nice suit and is a bit cocky. I said, “OK, but if there is that, why is he like that?”

Mike and I spoke an awful lot about how we go through life putting on masks and presenting ourselves in a certain way to hide something else. I became quite fascinated in what it was [Quint] he was hiding. And I think it’s very true of us as human beings: Stuff happens in our lives. You kind of can’t escape that, and some is a lot more severe than other things, but we try and run away from it. We try and put on a mask and pretend that things don’t happen, and present ourselves to the world to be accepted or present ourselves in a way that people won’t see the flaws. People won’t feel the hurt. So, I sort of became quite fascinated with that, and that’s kind of how Quint was born, in a way.

TVLINE | I just want to make sure I have this clear: So there was a possibility you were going to be the Jamie role? The groundskeeper?
I’m talking like pre-writers’ room. It was “There’s two male roles that I know of right now” or “There’s two roles from the book that we can adapt,” but then, they figured out very, very quickly that they wanted Jamie to be a woman and I would be playing Quint. But the initial conversation was, “I don’t know who you’re to play. Do you want to be in it?”

TVLINE| Ah. Let’s talk about Peter and Rebecca. Do you think he actually loved her? Sometimes I believe he does, other times I really think he doesn’t.
I fully believe that he loved her, and I said this to Mike. I said, “What would be really interesting is if we play with that.” I’m really interested to see what’s to come out of it… It’s been so interesting, people’s response to Quint. People have come been like, “I hate you.” And other people are like, “Oh, that poor man.” [Laughs] And so, it’s really interesting to see the response to it.

I made the choice that he really, really does love her. Had he not, she wouldn’t have fallen in love with him and ended up in the position that she ended up in. And so, we needed to make sure that in order for it to make sense, that there had to be something about him that she really, really fell in love with. And I think that it is genuine, but again, we’re playing with the idea of people’s pasts and people’s trauma, and how it can completely destroy the relationship that you have in your life or the way that you behave in life afterwards. But I chose to really, really love her. That you say that you flip between the two? I think that that’s kind of what we wanted. 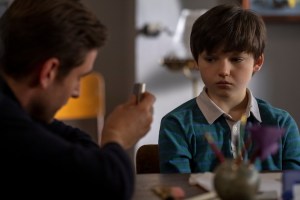 TVLINE | Eventually, it becomes clear that Miles is being possessed by or controlled by Peter, and Benjamin Evan Ainsworth mimics a lot of your body language and speech patterns. How closely did you two work together on that?
We worked right from kind of pre-production, because knew that this is where it was going. We worked from before we even started filming. Ben and I would sit down, and we had a couple of hours where we sat down and we discussed, “OK, let’s have hands in pockets, and let’s speak this way.”

We managed to get the script editor to give us scripts, give us all the scenes where Miles is possessed, and Ben and I would go through them, and I would read them. I would read the Miles lines, and he would then copy what I would do. And then, when it would come to shoot them, I would be on set, off-camera, helping him out. Because it’s such a hard thing to ask a kid, a 10-year-old, to embody a 35-year-old. But he was incredible. We worked really quite closely on trying to get the tiny, tiny nuance of it right. So, upon sort of a re-watch, you would see much more clearly that Quint was in that.

TVLINE | Let’s talk about your big monologue in Episode 7, when Peter is stuck in the memory of his mother coming to see him. The fact that Peter’s father abused him as a child comes through clearly, though it’s never overtly said; the scene is powerful. Was what we see pretty much how the scene was on the page?
There was an awful lot backwards and forwards. We’d already started filming, and I said to Mike, ” I think this is what’s happened to him. I feel that this is right.” And [then] I was on a plane, and I re-watched Forrest Gump. There is that something happened in Forrest Gump where Forrest says about his friend [Jenny], he said something about how her dad loved her a lot, and he used to kiss her on the mouth. And that’s the only reference that you get for the whole movie, but there was something so profound about it just being the most innocent sentence that Forrest Gump says that paints this huge picture and completely colors the whole story of this young girl.

And so, I spoke to Mike about that, and I said it I don’t think we need to go into, “This is what happened to me: I was abused, and I was sexually abused.” I think Mike handled it in a very, very respectful way and in an honest way. Anyone that’s been a victim of anything like this, it’s not something that is usually said aloud. Mike and I went backwards and forwards a lot on [it], and it was a real collaborative writing experience for those scenes specifically. They were the scenes that I was the most excited, creatively, to do.

TVLINE | I’ve spoken with a few of your castmates, and they said to be on the lookout for hidden visuals — like the ghosts in Season 1 — in the Bly Manor scenes. I’ve noticed a couple, but I’m going to need you to give me some hints.
Do you know what, though? The thing is, Kim, is that on Season 1, we had no concept that that’s what they were doing.

TVLINE | Really?
I mean, I think Kate [Siegel] knew, but yeah. Victoria and I were talking about it the other day. We would see these ghosts in the makeup chair, but never quite put it together that they were being placed in the back of a shot. I don’t know how I rationalized it in my head. I said, “Oh, maybe they’re doing some kind of promo thing.” You would see these ghosts around the set, but Mike never told us that they were being put in the back of the shot.

And so, this time round, we had our wits about us. [Laughs] I have to say, I I’ve watched Bly Manor and only spotted a couple, and so I think it’s probably something that I’m probably not the best person to ask. It’s probably a Mike Flanagan question of where these are. There’s an awful lot of the Doll Face Ghost. I remember [the actors playing the ghost] in a couple of scenes that we shot with Rebecca in the house in the kitchen at night, and I remember halfway through a take, clocking him in the corridor and being absolutely terrified. [Laughs]