Warning: This post contains spoilers for The Haunting of Bly Manor.

When TVLine was approached about chatting with Kate Siegel about The Haunting of Bly Manor, it was under the agreement that we wouldn’t breathe a word about the conversation until today, three days after after the horror anthology’s second season premiered.

After all, Siegel — who played The Haunting of Hill House‘s touch-y psychic Theo — doesn’t show up until Bly Manor‘s penultimate episode (most of which was shot in black-and-white), and details about her character were kept under tight wraps during filming. And with good reason: Siegel’s Viola, a 17th century woman whose sister kills her in her sleep, turns out to be the very reason that the British country estate is haunted by the spirits of anyone who has the misfortune to die there.

Though much of Bly Manor is based on Henry James’ novella The Turn of the Screw, series creator Mike Flanagan also pulled heavily from James’ The Romance of Certain Old Clothes, which provides the bulk of Viola’s narrative (albeit with a few tweaks). But little of this was known before the season hit Netflix Friday.

So when we talked to Siegel ahead of Bly Manor‘s premiere, we sensed joy in the very act of her being able to discuss the show in detail, starting with that commanding painting of her as Viola that hangs in the home’s magnificent entryway throughout the season.

TVLINE | Just to put you at ease, we’re holding anything that’s spoilery until after the show is released.
Yeah. Otherwise, we would have a lovely conversation about the set or something of Bly Manor. [Laughs]

TVLINE | You joke about that, but the set was stunning.
Yeah. And I think it’s important that these houses are like memorable and gorgeous, because it truly is stories about these manors. Like, it’s a haunted house story at its root, and it’s always so much fun to act on sets like that because there’s so much of the work that is done for you by the fact that you just look around and you feel transported.

Also, there was a full-size portrait made of me, which is like: Check that off the bucket list!

TVLINE | Please tell me you are in possession of that huge painting of you.
Absolutely, I am. In both a literal and metaphorical sense. Anywhere it goes, I go. It’s kind of like a Harry Potter haunted portrait. So, I can see whatever’s happening in front of it. [Laughs]

TVLINE | The audience doesn’t see you until late in the season. Talk to me about playing that kind of a role, which is much different from Theo, who was around throughout Hill House.
It’s a lot of fun to come into one of these stories and get to play the ghost — the ghost that Mike [Flanagan, who is Siegel’s husband] is referencing when he says a ghost can be a wish. A ghost can be a desire, and I think for Viola, getting to play that epic gravity well of need, that was a great place to start. There’s a ton of freedom in the idea that I am the story within the story within the story, kind of like ghost-story Inception, and so I didn’t have to spend as much time creating a real facsimile of a person. [It wasn’t] how would an actual person behave in this moment? It was more about how does this metaphor for need and for gothic love take form? And that was a really fun challenge for me, getting to create something that was a bit more of a metaphor than it was a person. 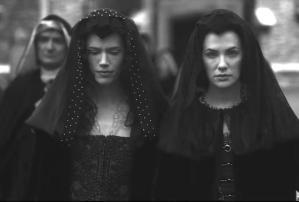 TVLINE | How much did you and Katie Parker, who plays Viola’s sister Perdita, talk about the dynamic between you two? So much of what goes on between them isn’t verbal and plays out while the narrator is speaking.
Well, I think at its heart, The Romance of Certain Old Clothes is a love story between the two sisters. It’s not really about the love triangle between Arthur, Perdita and Viola. It ends up being the sisters’ story, and so one of the things Katie and I always talked about is that extremely tactile relationship that sisters can have where they’re constantly like tugging and rolling around on top of each other.

The closer they get together, that energy draws them together, and they want to be close and they want to be touching. They want to be basically inside each other’s body. And then when it starts to pull away and they can’t, then their relationship starts to disintegrate the way the faces of the characters will later disintegrate. The touch becomes violence, and the touch becomes murder. We couldn’t use dialogue as often to tell the story. We had to use the physicality, and sort of the way we talk about their relationship disintegrating was within the language of touch. 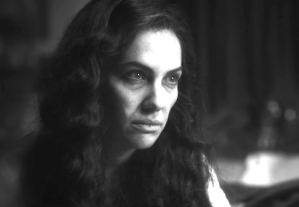 TVLINE | After I saw how Viola fit into the narrative, I started to wonder how much of the faceless Lady of the Lake ghost was you walking around in the nightgown?
A lot of that was done by a wonderful stunt performer named Daniela Dib, and she had to do that because I had a young baby at home. So I definitely wanted to be up in Canada, haunting people in the middle of the night in gorgeous Bly Manor, but unfortunately I had to be in my own house being screamed at by a tiny gremlin in the middle of the night. [Laughs]

TVLINE | Do you think having children affects how you view the themes of this season, about love and time and how everything fades away, whether you want it to or not? I just kept thinking of how, when I had my daughter, suddenly all of those ideas seemed that much scarier.
I think that you are completely on the nose with that: having a baby changes perspective 100 percent. It introduces a sense of terror to your life that wasn’t there before. It also, in a strange way, closes and opens a lot of doors inside of you. I remember feeling that way like when you wander in the halls of your brain at 4 in the morning because you can’t sleep. Fears that used to be terrifying, like “What if no one loves me?” That door is closed. There is someone who’s very clearly going to love you forever. That kind of wound gets a little bit of attention. And then there are other doors, like “I wonder if I’ll ever get to go skydiving?” And it’s just like no. Never again. You have a child. You can’t…you know? [Laughs] “I wonder if I’ll ever experiment with hard drugs again?” No. You will never because you have a child. [Laughs]

I haven’t had a lot of time to experience those new pathways in my brain through artistic expression, and [it was] such a key to Viola’s character. Again, like when she says to her daughter, “It’s you. It’s me. It’s us.” That intimacy is what saves Flora later in the show. It’s what Dani invokes that memory for Viola, who is now the Lady of the Lake. That’s when she’s willing to connect with someone and not just take but share, because she remembers. Like they say, the memories had been washed from her. Her face has been washed from her. Everything has. The only thing she has left is that moment, is the desire to get and hold her child again, and so Dani taps into that need to save everyone, you know? That’s very dark, romantic, gothic love.

TVLINE | As a side note, I do love that Viola’s stubbornness is thing that like creates, as you said, like this epic well of horribleness for anyone who happens to get near it.
[Laughs] I’m sure that there’s a reason that Mike chose me for that part, but I can’t imagine for the life of me what that would be.