Warning: The following recap, by its very nature, contains spoilers about the Season 1 finale of the Apple TV+ comedy Ted Lasso.

Show of hands: Who else had the biggest grin on their face when AFC Richmond clubhouse attendant Nate was promoted to assistant coach in the opening scene of Friday’s Ted Lasso? It was one of a handful of feel-good moments in a season finale that took viewers on quite the emotional journey.

Episode 10 saw Richmond go up against former teammate Jamie Tartt and rival club Manchester City in a climatic match. At risk of relegation, Ted was determined to take his team to victory, as unlikely a scenario as that seemed. First, he had Nate rile up the players with press box footage of Jamie trash-talking Richmond. He then put forth a trick-play strategy to generate chaos and confusion out on the pitch. 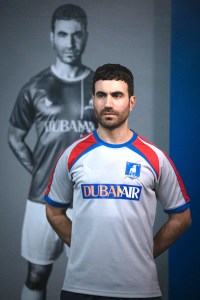 Ahead of the big game, Richmond would also have to install a new team captain. The decision was Ted’s to make, but he left it in the hands of veteran captain Roy, who eventually chose the equally temperamental Isaac to be his successor.

Roy was down but not out, as we’d soon discover, when Ted called him off the bench at halftime. It was shortly thereafter that Richmond earned a penalty and Man City  took the lead. At that point, the sluggardly Roy mustered all the energy he had to block Jamie and prevent an additional goal. In doing so, the fan-fave suffered what looked to be a career-ending injury; he limped off the pitch as everyone in the stands cheered him on. Back in the locker room, he reunited with girlfriend Keeley, who refused to let him be alone during this difficult time.

Back on the pitch, all hope was lost until 26,000 mobiles were alerted to Crystal Palace’s decisive victory against Norwich. As such, all Richmond needed was a tie to avoid relegation. And so a combination of trick plays were put to use, including the “Lasso Special,” which distracted Manchester City’s defense long enough for Sam to pass the ball to Rojas and earn Richmond a tie-making goal. Unfortunately, the clock hadn’t run out just yet, and Jamie had enough time to break away with the ball and make an extra pass (callback!) to a teammate, who scored a game-winning goal. AFC Richmond lost 2-1, and they’d now face relegation.

Afterwards, Ted managed to muster up a few words of encouragement to share with his club, inviting them to lean on each other and put this loss behind them — to be like a “goldfish” and not allow this painful memory to linger. He even attempted to lift Jamie’s spirits after he witnessed his former star being admonished by his overly critical father. He sent Coach Beard out to give Jamie a note, congratulating him on finally being a team player and making that game-winning pass. Also enclosed was one of Ted’s toy soldiers, originally gifted to the him by his son Henry to keep him safe while he’s far from home.

In the final scene, Ted paid Rebecca a visit to hand her his resignation letter. Little did he expect that the team’s owner had no intention of accepting it. She sat Ted down and assured him that he wasn’t going anywhere. Instead, he’d spend the next year working to reverse AFC Richmond’s demotion, and in turn, deliver the most unlikely comeback story in Premier League history. This called for a celebratory toast, at which point Ted took a sip of water, which he was once again surprised to find carbonated — ergo the season-ending spit take that drenched our favorite boss lady.

What did you think of the Ted Lasso finale (and Season 1 overall)? Weigh in via the following polls, then hit the comments with your hopes for the previously commissioned Season 2.