The ABC comedy returns for Season 7 on Wednesday, Oct. 21, at 9:30/8:30c. But this Sunday at 10 pm, the Johnson family will appear in a pre-season, hour-long, partially animated black-ish special focused on the upcoming presidential election.

In the first of two back-to-back episodes, Junior excitedly makes his way to the polls to cast his first vote ever, only to find he’s been purged from the voter rolls. In the second, Dre’s co-worker Stevens runs for Congress, prompting an irate Dre to campaign against him. Oscar-winning director Matthew Cherry (Hair Love) helms both episodes.

Ahead of the special, we got on the phone with black-ish boss Courtney Lilly to discuss what’s ahead for the Johnsons in the special and beyond. 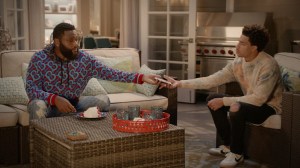 TVLINE | In one way, with the Black Lives Matter movement so much in the national consciousness now, it seems like black-ish would have very rich material to work with. But at the same time, just because white people like me are just talking about it more than they were before doesn’t mean it’s anything new. So talk to me about making black-ish this season in light of everything that has happened in the past six months.
Well, it’s interesting, because it’s literally kind of what you said: We’ve been able to re-air episodes we had, and everybody thinks, like, “Oh, look at that. You guys were ahead of the curve.” But these were just the conversations that were going on in the houses of a lot of our writers, and so, for us, it’s continuing to evolve in those conversations.

We’re not an apolitical show in a lot of ways, you know? What it is, honestly, again [is] reflecting what people are talking about. So, for us, it is we’re going to talk about how a Black family deals with the idea of what protest is, generationally.

We have a multigenerational family, and that’s something that has been passed on from generation to generation to generation. It’s not a smooth handoff on everything, either. Everybody has different ways of doing it. Nowadays, so much more is online. There’s activism that organized around hashtags and so on and so forth. And look — every generation is, the older ones are more conservative, generally, than the younger ones. So we have plenty of places to play and to be able to tell our stories that are reflective of what’s happening in this family and the conflicts that [play out]. We don’t sit there and look at it through a frame of, “What do we need to tell white America?,” you know? [Laughs] We do sit there and say we need to provide context for a broader audience who may not be doing as much of what we’re doing, and we definitely do that.

And Anthony [Anderson], through his voiceover, is always great with that. But I think in the stories we’re trying to tell, they work from a place of families dealing with these things. Like, you could be a police officer in Kalamazoo, Mich., whose son, all of a sudden, is posting tweets about X, Y, and Z. That’s something your family could relate to, because it’s generational: the idea about the way people look at these things is not so commonly stratified just by race.

So what we want to do is break down how this specific Black family — with where they’re from, what they do, and that all that other kind of stuff — is dealing with the current world. Like, you know, Tracee Ellis Ross’ character is a doctor, so we’re dealing with her working in this environment, and it’s a story about a family dealing when somebody is an essential worker and on the front line of healthcare during this time.

TVLINE | I’m very invested in Pops and Ruby — please don’t tell me they’re not going to make it this time, because it will break my heart.
Oh, no. [Laughs] No, no, no, they’re together. We can’t do that. That wouldn’t be fair to anybody, not at this juncture, you know? It wouldn’t be fair, and I don’t know how we could come back from that, too… To Jenifer [Lewis’] and Lawrence [Fishburne’s] credit, they did such a great job of evolving that relationship from the very beginning where there was that animosity, to really building into a friendship and an understanding. 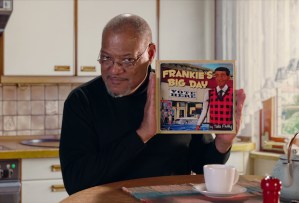 And I think last season, we did a great job of really kind of showing how these two are really kind of not only just peas in the pod for each other, but they really have always been emotional support for each other in a way, and a relationship that we can continue to build on. So, no, they’re staying together. We’re not worried about them at all. It’s going to be, you know, a new way of looking at the world for them, I’m sure, and for his family.

TVLINE | How about the other members of the family?
We’re giving Junior a girlfriend this year, a real serious girlfriend. You know, it’s funny. You sit there and you think about The Cosby Show, and you had a situation with Sondra and Elvin, with Elvin being an outsider in a world. We’re not trying to just ape that and do a, “Hey, my family doesn’t know this person. Who are they?” kind of thing. There’s elements — as any of us who’ve been in relationships where you join another family or you’ve had in-laws, or couples or spouses our partners join your family — where it’s a feeling-out period.

They come from an entirely different culture a lot of times, just from a family point of view. You know, you guys are Evanses. They’re Johnsons, everything’s different. For this family, having not been able to see that so far, it felt like a rich area — and also for Junior to be able to see what a real first romantic relationship is like. That’s real. It has stakes in it, you know?

Watch black-ish‘ Season 7 promo here, then hit the comments with your predictions about the coming episodes!