You want illicit substances and/or tutoring help delivered immediately to your doorstep? Thanks to Tariq’s ingenuity in this week’s Power Book II: Ghost, there’s an app for that.

The hour follows Tariq and Brayden as their drug-delivery-on-demand venture becomes a hit, then nearly implodes thanks to its own success. And you know who’s watching all of this very closely? Monet, who makes it clear that Tariq works for the Tejadas (and not the other way around).

A NEW BIZ IS BORN | After Monet lays down her rules for Tariq (all cash everything, etc.), ‘Riq heads to a meeting with Simon Stern. But he’s greeted instead by Simon’s young boytoy/new husband Bash, who listens as Tariq pitches Course Correct: an app that delivers drugs and tutoring directly to college students’ doors. Bash is as smarmy as they come; he calls ‘Riq’s idea “brilliant” and wants to back it but balks when Tariq insists on all payouts in cash — no wire transfers or anything of that sort. Simon would never agree to such a deal, Bash says… but he doesn’t mind doing a little business behind the back of his silver-haired hubby. So they make a deal: Bash will get 5 percent of all profits, Tariq will get his cut in cash, and Simon never needs to know.

Soon after, Tasha contacts her son via burner: That call from Tejada has her spooked, she knows Tariq is selling again, and she wants him to go to one of Ghost and Tommy’s old dead drops and grab a gun for protection. Tariq doesn’t want to, but he winds up doing it anyway. 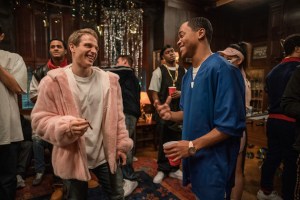 Tariq and Brayden acknowledge that some of Course Correct’s customers may actually want study help and not drugs, so they hire students who can actually tutor but who also don’t mind delivering drugs. And if someone ponies up for the premium package, ordering their drugs is even easier: “Math” means weed, “econ” means uppers and “chemistry” means downers. Pretty soon, the app is raking in the cash.

In canonical studies, the class is reading Machiavelli’s The Prince, which provides a nice parallel for how Tariq winds up cutting down some of his on-campus competition later in the episode. Also, the students learn that there is a canonical studies fellowship in Washington, D.C.; among other perks, the recipient gets to graduate a year early. Of course, Tariq is interested. So is his classmate Lauren, whom we learn has a boyfriend living in the nation’s capital. As soon as class is over, Lauren invites Prof. Reynolds over for dinner with her parents to discuss the fellowship. He quickly invites Prof. Milgram and Tariq, as well, for “optics.” (Dude, I know you’re in the habit of bedding students, but think Lauren’s invitation was just a dinner invitation.)

SAXE RECRUITS HIS NIECE | Tariq pays Davis Maclean in cash, which raises Paula’s hackles, but the lawyer isn’t worried: If Tariq were getting his funds from criminal activity, he reasons, they’d be getting their fee wired from some shady LLC. Besides, Davis is more concerned with their current mission to make Saxe look biased in front of the judge, which could lead to him being forced to remove himself from the case.

Meanwhile, Saxe comes up with another ridiculously not-OK plan to find out how Tariq is paying for his mother’s legal defense: He has his bratty teen niece Riley try to meet him at a party. (It doesn’t go well, though she does get close to a very receptive Brayden.)

Blanca and Tate both testify in front of the judge in Tasha’s case, but neither are the slam-dunk damnation of Saxe that Maclean hoped they’d be. And Paula is still very antsy about getting paid in cash: She visits Tariq at his place to tell him that they’ll need a check or wire transfer from now on. He tells her he stole the money from Estelle, because “she’s the only one getting paid from my father’s will,” but that he’ll play by their rules from now on. And Bash is happy to change the arrangement to half in cash/half wire transfer… provided that Tariq gives him a bigger cut of the highly successful business. 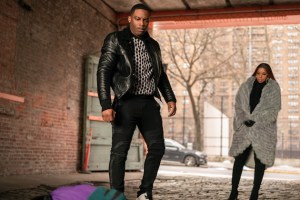 DON’T MESS WITH MONET | Monet and Cane visit the crew that was causing all the trouble on social media in the previous episode. She announces they’re cutting the crew’s supply, so its leader calls her a bitch in Spanish twice. That’s basically a formal invitation for Cane to beat the snot out of the leader, so he does, making his mama proud.

After announcing to Cane, Dru and Diana that Tariq is their new partner, Monet sends Dru to Stansfield to tail Tariq and figure out how he moves weight on campus. She also makes Diana surrender her non-burner phone, because she still doesn’t trust her after the incident with the burner in the last episode. And then she soothes Cane, who is mad that she made decisions without him, by telling him that being the muscle is his lane in their operation, and he should “stay in it.” 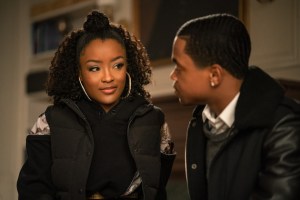 Dru is so bad at his task that Tariq instantly figures out exactly what’s going on, and so he just kind of goes about his day while Dru tags along. They wind up at art class, where Dru meets a cute, flirty basketball player. And Dru is so taken with the man, he doesn’t even notice when Tariq leaves.

Dru winds up back at the basketball player’s room, and it’s not long before their shirts are off and they’re kissing. But before much can happen, Dru realizes he has five missed calls from Tariq, who needs more product in order to meet all of the app’s orders. So after a short game of telephone, Diana winds up at Tariq’s place with a bag of drugs and a kiss for him. He points out that her mother didn’t want him to see her. “Monet ain’t here,” she says simply. 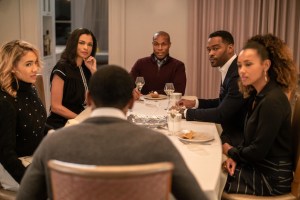 DINNER DISASTER | Back at the Tejada house, Monet finds a sketch of Dru’s hook-up’s bare torso in his bag. While he’s in the shower, she calls out to him that his dad thinks he’s soft, but she’s not worried. However, she cautions him to “be careful with yourself. Not everybody, every man, is like our family.”

At Lauren’s house, things have gotten incredibly testy between Jabari and Carrie by the time a very late Tariq shows up. Lauren’s parents are, in two words, A LOT. Super snobby, very concerned with status. But we learn a bit of intel while the awkward meal is going on. First, Prof. Milgram knows Davis Maclean and warns Tariq to be careful around the lawyer. “A win for Davis doesn’t always equal a win for his clients,” she says. Lauren’s brother is in “a facility” after his overachieving nature led him down a path that ended with him getting addicted to drugs. And Lauren’s boyfriend, Malcolm, is a cheeseball suck-up who is beloved by Lauren’s parents — as evidenced when he shows up unexpectedly at dinner, right after Lauren kisses Tariq in a private moment — and refers to her mom as “my future mother-in-law.” (Side note: Ick.)

Back at campus, Carrie and Jabari fight and then (shocker) have sex in his office. And Tariq engineers a situation so that Scott, the drug dealer he had Epiphany keep busy in the last episode (aka Tariq’s main competition), gets suspended from Stansfield for hitting Brayden at a party.

A SECRET WEAPON? | But we’re not done with surprises yet! Davis and Paula are sleeping together, though he is married to a woman named Marilyn. After they finish up a tryst in what looks like a hotel room, she notices that they’ve just gotten a wire transfer for Tasha’s defense… from a shady LLC. And since they’ve struck out so far on the Saxe front, they’re taking another angle: At the end of the hour, Tameika gets served with a subpoena.