What Masked Singer host Nick Cannon said at the top of the Season 4 premiere is true: Finally, we have something fun involving masks.

Fox’s costumed singing competition returned Wednesday with a new crop of contestants that, quite frankly, blew away most of the people who took part in Seasons 1 through 3. Of the six performers in Group A — Sun, Giraffe, Popcorn, Dragon and Snow Owls (the show’s first duet costume) — four could saaaaang and one was a very talented rapper. Unfortunately for that rapping performer, though,  his skill, coupled with a highly recognizable voice, became his undoing. But we’ll get to that in a minute.

In addition to the owls’ double costume (by the way, they’ll perform and stay/get voted off as though they were a singular performer) this season features a few differences from prior ones:

* The stage and its surroundings now have the ability to be transformed into pretty much anything, thanks to greenscreen-esque technology.

* Judges Jenny McCarthy Wahlberg, Nicole Scherzinger, Ken Jeong and Robin Thicke have to log their first guesses for each performer before hearing the singers speak; the judge with the most correct first guesses at the end of the season will win the Golden Ear trophy.

* Some at-home viewers will influence each week’s dismissal, though it’s a little complicated. (Get the full story here.)

* Though it appeared as though the audience was packed with unmasked and decidedly un-social-distanced Masked Singer fans, that was thanks to a fancy bit of illusion — as a note that flashed on the screen during the closing credits informed us: “Due to health restrictions, visuals of audience featured in this episode included virtual shots, as well as shots from past seasons. The use of these visuals was for creative purposes only and did not impact the actual audience voting and outcome.”

Let’s move on to the performances, shall we? 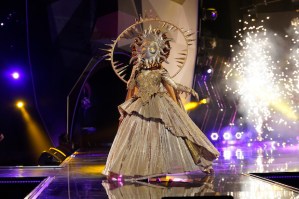 SUN | Lizzo’s “‘Cuz I Love You,” with that acapella climb right at the beginning, was a bold choice for the season’s first song. Good thing Sun nailed it, seeming very comfortable both working the stage and holding a microphone. Her clues included: “I’ve had some extreme seasons in my life,” a symbol that looked very much like Mickey Mouse’s head, a jaguar (the animal, not the car) and mentions of being both “burned out” and “frozen.” (My guess: I got nothing.)

POPCORN | “I built a career around love,” Popcorn told us in her set-up video, which also featured a goldfish wearing gold hoop earrings. She also narrated the whole thing in an accent that seemed like a put-on, but who knows? Her rendition of Pink’s “What About Us” was very strong, and that voice just seemed so familiar to me. Other clues included: A tiger, mention of how she “worked long nights, rushin’ from one job to the next,” meatloaf (or is that Meatloaf?), and a carnival ride marked “Proud Mary-Go-Round.” (My guess: “Tell It To My Heart” singer Taylor Dayne.) 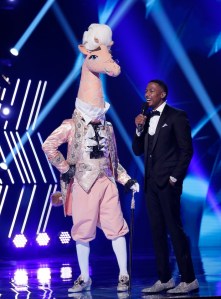 GIRAFFE | The person inside the show’s tallest costume ever said “Music is in my blood,” but that was not evident from his performance of Black Eyed Pea’s “Let’s Get It Started.” Perhaps he’s a drummer, like the judges inferred from his clues-package mention of how he “drummed up towering success” with hard work? Other clues included: “I’ve had a rollercoaster career,” $3, “crash and burn” and “when I stuck my neck out and took a gigantic risk, I became the butt of everyone’s jokes.” (My guess: rapper Vanilla Ice.)

DRAGON | Dragon was a force on stage, rapping LL Cool J’s “Mama Said Knock You Out” with aplomb. That voice, though, was so recognizable that there was no way he was going to last to the end of the competition. His clues included: a dog bone, the Statue of Liberty, “I’ve always been a fire-breathing beast” and how wearing “funky, outrageous costumes isn’t new to me.” (My guess: I’m always completely honest with you guys. In that vein, I’m not going to guess on this one because I knew who it was before I watched the premiere — and you can read my exit interview with Dragon here.) 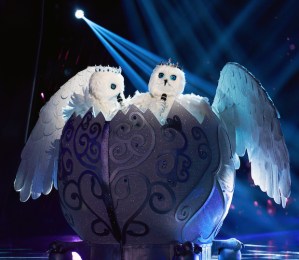 SNOW OWLS | “It’s Matt Damon and Greg Kinnear!,” Robin shouted as the pair of birds were rolled onstage and… that’s a very specific, kinda obscure reference, right? Given the “oh, brother” mention in the pre-song package, I got a sibling vibe from Snow Owls, one of whom seems male and the other female. They sang Great Big World’s “Say Something” and emoted as much as two people covered in feathers and giant, glassy could; their voices sounded great, as well. Other clues included: “You haven’t seen us together in a while, but now it’s time for a family reunion,” mention of the male being “a prankster, a real wise guy,” Magnolia and Quarrel Canyon and a pearl. (My guess: Dancing With the Stars pros-turned-multipurpose entertainers Julianne and Derek Hough.)

THE UNMASKING | Dragon was the first performer of the season to go. When he was unmasked, he was revealed to be rapper Busta Rhymes. (Read what he had to say about the premiere.)

Now it’s your turn. Grade the premiere via the poll below, then hit the comments with your early guesses about Group A’s identities!