We doubt much Courvoisier was getting passed around Dragon’s home Wednesday night as the results of The Masked Singer‘s premiere episode were made known: The fiery beast was the first Season 4 performer to get unmasked, and when that happened, he was revealed to be rapper Busta Rhymes. (Read a full recap here.)

TVLine chatted with Rhymes Wednesday about his brief time on Fox’s singing competition; his upcoming album, Extinction Level Event 2: The Wrath of God; and — because when’s the next time we’re going to get to talk to the “Break Ya Neck” artist? — shooting his super memorable Super Bowl commercial with Game of Thrones star Peter Dinklage.

TVLINE | It’s a bummer you got voted off early. Had you given thought to what your strategy would be — songs you’d choose, how you’d act onstage — if you’d made it farther in the season?
The only strategy for me is just to do what I love, not only performance-wise but song-wise. Outside of that, there really ain’t no other strategy. You obviously always want to win. [Laughs] But win in the way that you’re going to enjoy it. And have fun. And that’s the strategy always for me…

Everything about that show was fun, and I think that’s important, especially in these times with all the madness going on. The fun, the peace of mind, the happiness that people have grown to love and are used to has been taken away from us. We’ve still got to remember that it’s important to keep that balance of being able to live life to the fullest and enjoy life and never let anyone take that from you. 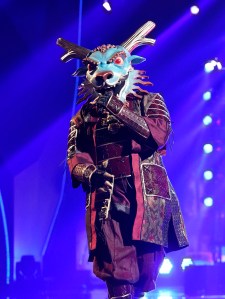 TVLINE | You did not leave because you weren’t good or because the judges didn’t enjoy your performance. You left because you have one of those voices that’s instantly recognizable — which is normally a great thing for a singer. Unfortunately, it did not serve you well here.
[Laughs] I ain’t gonna lie: You’re right, though. I tried to disguise it by making it deeper, and I tried to actually tone down the energy of my performance so it wouldn’t look like the traditional, impactful energy that I give because that would’ve made it all the more obvious. I guess the costume, being a dragon and people knowing that Busta Rhymes represents the dragon, and the signature sound of my voice. I don’t know if that was the best decision to make as far as a costume, to try to disguise that it was me. [Laughs] But I just love being a dragon in everything that I do, so it was more about fun for me than trying to disguise anything.

TVLINE | You have a new album coming out pretty soon. What can you tell us about it?
I have not announced the release date yet, but I am definitely releasing the album on this side of the year… I’m going to be making an announcement probably within the next week, what the release date is going to be. I’ve currently given two offerings from the record, one with me and the Number One dancehall artist from Jamaica Vybz Kartel. The song is called “The Don & The Boss.” I also just recently released, last Friday, a collab with me and the incredible Anderson .Paak called “You.” Both songs have videos… The buzz, the anticipation, the way the dots are connecting, it’s coming together and it’s feeling really good. It’s setting me up to roll out this album in an incredible way.

TVLINE | I know this may seem out of left field, but our readers loved your Doritos/Mountain Dew commercial with Peter Dinklage from Super Bowl 2018. What sticks in your memory about shooting it?
It was me, Peter Dinklage, Morgan Freeman and Missy Elliott. I think that was probably one of the most incredible highlight moments of my career, just being able to collab with such icons as those three individuals. I think the most intriguing part of the whole experience, to me, was watching Peter Dinklage kill my Chris Brown “Look at Me Now” verse so incredibly. I was in disbelief, because I didn’t know that he would be able to nail it the way that he did. But I also grew to learn that he used to rap. So all of that for me was just really fulfilling, because it was a confirmation that he was doing this because he really loves hip-hop, as well. Those guys, Morgan Freeman and Peter Dinklage, it’s not what they do. They’re so iconic in what they do do as actors from television and film that it’s like, the fact that they chose to want to align themselves with hip-hop in the way that they did and be willing to represent hip-hop in the way that they did just meant the world to me. I thank them on infinity levels for being so comfortable in that space and having fun and giving it up for the culture in the way that they did. It was beautiful.