College freshman are known for making bad decisions, and accordingly, Tariq St. Patrick makes one of the absolute worst in this week’s Power Book II: Ghost.

But ‘Riq’s misstep doesn’t involve imbibing too much at a frat party or signing up for too many credit cards on the quad. Instead, he enters into business with the Tejada drug syndicate and possibly screws his family even worse than they already were… which is saying something. (When this kid goes, he goes big, am I right?)

Read on for the highlights of “Play the Game.” 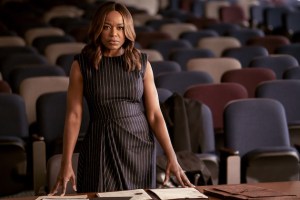 TASHA’S MOCK TRIAL TRIALS | When she’s hauled out of jail and brought to the courthouse, then hustled into a suit and full hair/make-up, Tasha doesn’t know what the heck is going on. But she soon learns: Davis has hired a faux judge and jury for a practice trial, so she can prove to him that putting her on the stand (her idea, by the way) is smart. And indeed, Tasha gives a convincing and tearful testimony about how Ghost intimidated her into doing whatever he wanted, including some stuff that was illegal.

But when she comes back for Day 2, which includes cross-examination, it’s a whole different thing. Davis has Tameika Robinson (!) to do him a favor and play the prosecutor, and she knows enough about the St. Patricks and their various bad deeds to reduce Tasha to a confused, panicked mess. She paints Tasha as a woman scorned who just might’ve had Tommy kill Angela, too, and that’s that: All 12 faux jurors find Tasha guilty.

“I’m innocent of these charges!” Tasha weepily yells at Paula, Davis’ investigator, afterward. “But you’re not totally innocent, are you?,” Paula shoots back. Meanwhile, Davis is determined to get Tameika to help him defend Tasha (which I would totally be on board with, because I love her), but she says no. And when he starts asking questions about the time she was defending Saxe, she gets defensive and leaves. Paula thinks it’s time for them to wash their hands of everything related to Tasha, but he disagrees: “It’s time for us to double down and go all in.”

CAN’T PLEASE EVERYONE | Continuing his trend of ticking off his canonical studies professors, Tariq vocally disagrees with Prof. Simmons while discussing Plato’s The Apology. But after his classmate Lauren advises him to tell the teachers what they want to hear, Tariq writes a paper parroting Simmons’ views on the work… and gets a grade of “NC” — essentially, he failed. He later learns that Prof. Reynolds graded the papers, and he was impressed by Tariq’s take… and highly disappointed that ‘Riq chose to write something he didn’t actually believe. “The grade stands,” he says. “This is your consequence for not using your voice.”

Know who does use her voice, though? The grad student who comes on to Prof. Reynolds in his office later in the episode. He rebuffs her advances for a few minutes, but then stops her when she goes to leave. They wind up having sex in his office (seriously, doesn’t this guy have an apartment?). Sitting at her desk in the office next door, Carrie hears the rhythmic thumping and surmises exactly what’s going on. 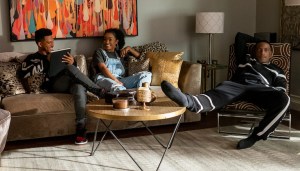 MEET LORENZO TEJADA | One of the crews who sell Tejada product are getting a little too public on social media, and Monet plans to send Cane (aka the far more violent brother) to strongly suggest that they quit that. But in a call, Lorenzo instructs her to send Dru (aka the peacemaker brother), instead. Still, Monet has Cane shadow his brother, just in case something goes down.

It does. Dru is quite peaceful in his request… which the head of the crew mocks. And when he starts a live video and nearly gets Dru in the shot, Dru slaps the phone out of his hand and things escalate. Eventually, Cane comes in — to his brother’s deep frustration — and intimidates the crew into staying offline. Then, just for fun, Cane shoots his gun into the ceiling a couple of times.

The big problem: The cops are nearby, drawn by the crew’s frequent posts, and one officer chases the Tejada brothers. Cane is more than prepared to shoot the officer, but it turns out the cop’s partner is Ramirez, aka Monet’s bed buddy. Ramirez draws his partner away from the guys, and they get home safely.

The next day, Monet has a conjugal visit with Tejada. Prior to this, we see that Tejada is as much of a boss inside the prison as he was outside; when he’s with his wife, we see that he still very much calls the shots regarding their business and their family. He gently criticizes how she’s running things, tells her that Diana should be allowed to go to school and orders her to stop babying Dru.

So Monet’s on a tear when she gets home, finds out about the cop drama and starts to suspect that Diana called her father to ask him to advocate for her re: college. She quickly realizes Diana has her own burner phone, which Monet fishes out of her daughter’s pocket and smashes on the floor. “I told you,” she says angrily: “My house, my rules.” 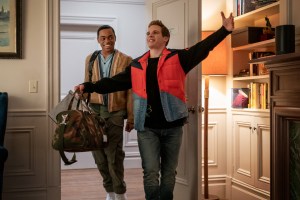 DEALING WITH THE DEVIL | At Stansfield, Tariq is pleased that Brayden was able to easily make them a bunch of cash by selling ill-gotten prescription pills at a party. So he gets Zeke to get Monet to come to their dorm room so Tariq can have five minutes of her time. He proposes a partnership: He wants her to be his supplier, promising her anonymity no matter what. She says that he’d have to move, because she doesn’t want Zeke anywhere near the business. So Tariq moves in with Brayden, and it looks like a new partnership has been forged.

Great, right? Wrong. Monet calls her husband, who then calls Tasha’s burner and announces that Tariq is going to work for them. And if he doesn’t do what they say, “Tariq dies.”