Lovecraft Country‘s Atticus Freeman has proven himself a smart, savvy navigator of the supernatural. But in Sunday’s episode, he was literally outfoxed.

The hour took us back to 1950, when Tic’s military unit arrived in South Korea. The episode was told from the perspective of Ji-Ah, a Korean nurse played by guest star Jamie Chung (Once Upon a Time). If the character’s name sounds familiar, it’s because she’s the woman Atticus has phoned in mysterious fashion a few times since the series began.

At first, Ji-ah seems like a lonely young woman whose widowed mother is begging her to bring home a man and help restore honor to the family. But we soon learn that “bring home a man” really means “bring home a man, have sex with him and then allow the monstrous spirit dwelling inside you to kill him in the bloodiest manner possible.”

Or, more to the point: Ji-Ah is a a kumiho, or fox spirit, inhabiting the body of the widow’s daughter. There’s a long, sad story about how it got there, but what you need to know is that the kumiho needs to take 100 souls, and then it will become human.

Ji-Ah has almost reached her tally when all of the nurses on her shift are rounded up and brought to an American camp, then questioned about being Communist spies. Two of the women are killed with little preamble, and Atticus is one of the soldiers who pulls the trigger, killing Ji-Ah’s best friend. So when he winds up wounded in Ji-Ah’s hospital soon after, she decides that he will be the 100th man she murders.

Problem is, she and Atticus fall in love. Everything is great until one day, she lets her guard slip while they’re in bed, and her kumiho tails start to attack him. She’s able to pull back in time, saving him, but not before she sees scenes from his entire life playing out in her mind. She warns him that he can’t go home, even though his time in Korea is up, because he’ll die. But he’s too busy freaking out and grabbing his clothes to pay much attention; the interlude is the last time they see each other.

TVLine got Lovecraft Country star Jonathan Majors on the phone to discuss the episode, titled “Meet Me in Daegu,” which answers some questions about Tic’s life before the series began… but also poses a whole bunch of new ones.

TVLINE | Ji-Ah has clearly been on his mind since he left Korea: She appeared in his hallucination at Ardham, and he’s called her a few times. Given what he’s seen since he left came back to Chicago, do you think now he might be thinking about their last night together in a different light?
Atticus is haunted, and we don’t know that. You think his first issue is his dad, right? And you find out the reasons he’s not going home isn’t just because of the issue with his father, but also because he’s been warned not to. So, it’s twofold. Yes, he has the issue with his father, but also he’s been told [not to] by a woman that he may or may not know if he loved or is still in love with, you know?

But he’s carrying that love with him still, and therefore is carrying that sense of dread with him, as well. And then, when I get to Chicago, and all these things begin, it’s almost as if, as Othello says, ocular proof, you know? He sees it, rendtions of what it is she’s mentioned. Her being a kumiho. Him seeing a shoggoth. Him dealing with the Sons of Adam… And so, the manifestation of all these things, he takes extremely seriously — and is trying not to until the code is broken. It’s such a private war.

… We’re at the halfway point, you know? We’re just about to tip into what I call the answer sequence. At least, that’s how I viewed it, in working on it. Atticus had his first question answered at the end of [Episode] 5. He decodes something. He finds something out. He gets proof there for himself, you know? Okay, “Die.” And “How did you know?!” [to Ji-Ah]. 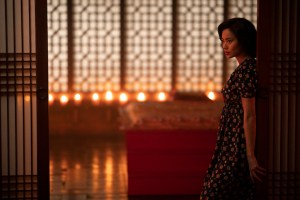 TVLINE | I noticed before that you stopped short of saying that Ji-Ah was his first love.
I absolutely think it is his first foray into love. I think I interrupted my thought. I wasn’t choosing not to say it.

TVLINE | Ah, OK.
She is, and that’s the most confusing thing. Because in [Episode] 5, he feels as if he’s in love with Leti, you know? And she asks, “Were you in love with her?” I don’t know.

I’ve experienced that a person’s love, whenever you encounter love, you don’t really know what it is until it’s gone. As cliché as it sounds, it’s cliché because it’s true. I just got done with a breakup a little over five days ago.

TVLINE | Oh my God. Wow.
You kind of go, “Man, I really did [love that person].” Or, “Maybe I didn’t. It’s really that question. I think, in time, it’s really only after the next lover or the next foray that you can really put into clarity what it is you had before. Especially so young. Especially when you’re at the juvenilia of your amorous encounters. [Laughs]

TVLINE | Which brings me to my next question: I love that when we saw him with Leti, up against the wall in the bathroom in Episode 3, he seemed so self-assured. And then we get to this episode, in which Tic has sex for the first time ever, and I’m like, “Honey, you barely know what’s going on, yourself!”
[Laughs] Yeah. Yeah yeah yeah. [Laughs] 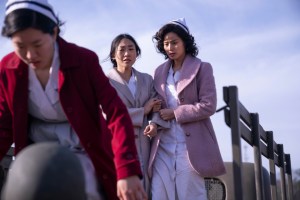 TVLINE | Atticus has shown himself to be someone who can adapt and roll with things rather quickly. But in that last scene with Ji-Ah, he cannot handle what happens. I mean, obviously, it’s a huge shock.
Right.

TVLINE | But in the pantheon of things he’s run into since, it’s not even that bad!
Right! [Laughs] I mean, that’s the great part about this episode, because [in earlier episodes] you go, “Why is he not tripping at this moment?” The first thing one needs to understand about Atticus is that Atticus was a Black soldier in the Korean War. The Korean War was horrendous. And it wasn’t televised. There’s just memoirs about it. The Coldest Winter [by David Halberstam] is something I kept in my trailer and would read over and over and over, and before this episode shot, I actually went to Hawaii and lived in a cave, and just read this book, you know? That and…what was the other book? Letters to a Young Poet [by Rainer Maria Rilke].

TVLINE | Back up a second. You lived in a cave?
Yeah, in Hawaii. I went hiking, and I stayed in this cave, and I was on a hiatus.

TVLINE | Wow. I’m sorry to belabor the point, but were you camping in the cave? Was it tricked out, or was it just rock, you and your sleeping bag?
Yeah, that. I was kicking it, you know? It was safe, I mean, it was civil. But that’s what I was doing.

TVLINE | Wow. OK, continue.
So I knew that, going into this episode, that it was important that we show Tic — this is actually the first time you see Tic, right? Once the show starts, he’s Atticus the entire time. You see flashes of Tic when he really gets into it with his father, the boy in him, but he’s a boy when he’s in war, you know? And if you remember the very beginning of the pilot, they’re running through the trenches and killing, but taking life is not an easy thing, and not something that people do.

It’s quite unnatural, especially in that way, with machinery. And so, in this episode, he’s being deflowered in all the ways. When you meet him, he does seem stoic, and a little tough, but also, like, an easy cry. But that’s because he’s holding on to all those things. It’s stuck in his body.

TVLINE | Tell me about the scene Ji-Ah’s tails start to attack Tic.
At at one point, I’m literally holding these green tentacles. And Jamie is struggling with them, and we’re anchoring each other. And then she’s holding onto my arms — and Jamie’s a very, a petite lady, and I’m not necessarily a petite fellow — so she’s holding onto me, and pulling like mad.

And I’m, like, doing the machine almost, like, doing the exercise. [Laughs] And she’s wrestling with them, and they say “Cut,” and I let them go, and she falls back, and I fall back. [Laughs] Bam! And it’s, “OK. All right, we go again.” It was fun. It’s really the most ridiculous and artful thing you can do, you know, because it’s so serious, right, because you’re dealing with bodies, and emotions, and all these things. And then you’re adding this element of, like, “Now there’s tentacles!” [Laughs] You know?

TVLINE | Last week, the audience got a huge revelation: That Atticus’ father, Montrose, is in a relationship with Sammy. What can you tell us about how Atticus might encounter that when/if he finds out?
I know how… [Laughs]

TVLINE | What can you tell us without spoiling anything?
There are things in life that I’m quick to say… “You hurt me, it’s fine. Fine. I’ll roll with it.” [But] you hurt someone I love? It’s fire and brimstone. So, in that same way with Atticus, the terrible things that have happened to me as Atticus, I can handle that. At least, I think I can. [Laughs] That’s about me, and only about me. When you bring in my Number One attachment — I would say Montrose is his primary attachment. If you start f—king with that, that shakes the foundation of the human being that can take it on the chin when it has to do with him.

And so, with this secret, there are going to be repercussions because of that. It’s interesting as we move forward with that discussion, and is it a matter of social stigma? Is it a matter of familial sanctity?

And where is [Atticus] catching his feelings from, you know? The taboo-ness of it, or the fact that your father… I mean, let’s just think about that, your father holding something so personal and dear from you as his offspring, you know?