Power Book II: Ghost‘s Prof. Carrie Milgram spent most of Sunday’s episode carving out a “safe space” for Tariq to mourn his recently deceased father. But, as we found out later in the episode, perhaps the space she should’ve been more concerned with was the distance (or lack thereof) between herself and Prof. Reynolds.

After the co-workers/former lovers’ fight morphed into angry sex in his office, Carrie told a friend all about the encounter. But it turns out that the friend was actually her 12-step-program sponsor, and that’s when we learned that Melanie Liburd‘s character is a sex-and-love addict. (Read a full recap here.)

“I wanted to write about it because I love writing about addiction, and I also think that people don’t understand sex addiction. They think that it’s just that you want to have sex all the time,” executive producer/showrunner Courtney Kemp says. “I mean, everybody wants to have sex all the time. A lot of [the addiction] has to do with picking an appropriate partner, engaging in risky behavior, behavior that gives — no redundancy here — no f–ks about who it hurts and how much danger you put yourself in.”

TVLine caught up with Liburd ahead of this week’s hour (Starz, Sunday at 8/7c) to discuss Carrie’s addiction and whether or not the actress is planning to visit This Is Us‘ Pearsons in the near future.

TVLINE | How much do you think Carrie knew about Tariq before she met him?
She knows what’s been in the press about his father, James St. Patrick. She doesn’t know all the dark stuff about him, but I think in the press it’s all his running in politics and doing good for organizations and charities. That’s all she knows. She kind of thinks of [Tariq] as a kindred spirit, because she had a really difficult relationship with her own father, who was quite bullyish, who really was so disciplined with her that she was an overachiever and she spent her whole life trying to please him, and nothing was ever good enough. I think he would pick her apart. So, she meets Tariq and she wants to fix him and help him. 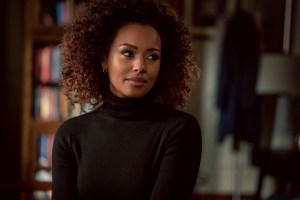 TVLINE | Even when she pulls strings to get him into canonical studies, then he burns her?
Yeah. I think Carrie can’t help herself. She has a complex relationship with Jabari and how she sees the world. She’s brilliant at her job, and she wants to make everything else perfect. Like, she wants to do this vigil that’s completely, really, inappropriate, really? [Laughs] She goes a step too far. There’s a big picture of Tariq’s dad, and he doesn’t want this vigil, and she does it anyway. But she just can’t help herself.

TVLINE | You brought up Jabari — we get a lot more about their relationship in Episode 2.
Oh, yeah. I know. [Laughs] There’s a big arguing, kind of raunchy thing. Yeah. Which was crazy!

TVLINE | Obviously, they have a very complicated relationship, even without the sexual aspect of it.
Yes.

TVLINE | And there’s a bit about him writing a book about her without her consent? What can you tell us about that?
Well, basically they lived together, they were engaged, and they’ve always had this kind of co-dependent, narcissist relationship that’s quite toxic, really. I think Carrie and Jabari just bring out the worst in each other. They’re not good for each other, but they just can’t seem to let each other go. Carrie moves to this school, and she knows Jabari’s looking for a job… so she helps him get this job knowing full well that they’re bad for each other… So he turns up at the school, gets the job, and they just start it all over again, this whole crazy dance. She goes to him. He’s toxic towards her. And she takes so much of it. He bullies her like her dad bullies her… And then when she steps away from him, Jabari follows her. So, they play this kind of cat-and-mouse chase thing.

TVLINE | And later in the episode, we learn that there’s a whole other level to what’s going on, given her addiction.
What I love about the way Courtney writes is, she writes you know, she writes a lot about characters not necessarily being in the best place in their life… Well, Carrie is in the middle of the lesson that she might learn in you know, five years. [Laughs] She’s at this whirlwind of going back to Jabari. He betrayed her with that book, basically. He laid her life out, all her complexities and all her darkest secrets. He may have changed [her] name, but it was laid out in this book which was an ultimate betrayal, and that’s why she left him in the first place… It’s a subject that you don’t see a lot of it in films or television, especially in women. I was just really interested in delving in and telling that story from a women’s perspective and how painful and how it can just tear your life apart.

TVLINE | You played Kevin’s girlfriend, Zoe, on This Is Us. That show loves bringing people back. Have you had any conversations with them about Zoe returning?
Oh, I hope so. I mean, I was going to go back for the end of Season 4, but we just couldn’t make scheduling work because I’m in New York. But I would love to go back. I miss those guys, they’re so lovely. Every time I bump into Dan Fogelman [executive producer], he’s like, “Yeah, we’ll get Zoe back at some point.”