Bradley Whitford was on The Handmaid’s Tale‘s Canadian set in mid-March, getting ready to shoot a scene for Season 4, when he realized that the coronavirus might just be a bigger deal than everyone was thinking.

“We were kind of joking about it,” he recalls. “I’m sitting, reading my cell phone, and I open an article where I’m reading for the first time, ‘Whatever you do, don’t touch your face.’ And while I was reading it, [a costume staffer] came and tweaked my scarf. [A makeup staffer] came by. Somebody brushed the hair off my forehead.” He chuckles wryly. “Pretty quickly, it became clear.”

The Hulu series shut down production soon after, just a few episodes into Season 4. But, praise be, there’s been a development. On an August afternoon, just before Whitford called TVLine from his home in California, he’d been on the phone with “all the Handmaid’s people, because we’re going back.”

Ahead of his return to Toronto, we chatted with the Emmy winner — who won in 2019 for his work as Commander Joseph Lawrence, and who’s nominated again this year — about what fate may await the Mayday-sympathetic commander when we all head back to Gilead. But don’t be surprised if politics, Canadian accents and Margaret Atwood’s sequel novel pop up in the conversation… as well as the staging of a certain West Wing episode slated for HBO Max later this year.

TVLINE | So you’re heading back?
Yeah, hardcore quarantine of two weeks. Like, you’re really not to allowed to leave your room for two weeks. So, somehow, I live in a world where I am getting more house arrest time than Roger Stone. [Laughs]

TVLINE | I don’t know if you’ve been working on that one since the beginning of this call or if it just came into your mind, but it’s a good line. I would definitely use it again.
[Laughs] I’ll use it again. I’ll put in the quiver.

TVLINE | Elisabeth Moss told us things had just gotten going when you had to pull back.
Yeah. I was sitting right where I am now, and I had just been talking — there’s a guy who shows up a lot who’s a public health expert called Andy Slavitt who, very bizarrely, used to… before I lived in the house I live now, lived in the house next door to me. But he’s somebody I know through Obama healthcare initiatives, and I was talking to him. It was March 1, and he was saying, “You need to take this very seriously.” I had mentioned that I was about to get on a plane to go to Canada, and he said, “I don’t think you’re going to be working very long, because I think they’re going to shut down.” That was March 1, and I called my agents. We all had different moments where we started taking this seriously. They, understandably, were like, “No, everybody’s working. The CDC hasn’t banned any travel.” So I went up, and we shot for a couple of days… I was so excited because Lizzy [Moss] is directing for the first time.

TVLINE | I’m very interested to see that episode.
I don’t have to blow smoke up her a– because, apparently, I have the job. [Laughs]  She is the most impressive, creative collaborator, you know, honestly, that I’ve…in an ongoing way that I’ve ever been able to work with. She is involved in every draft, every cut. I’ve never seen a producer/director be that involved and just become the creative center of her project in every way — all the while giving what I think is the performance of a generation. I always joke with her that it’s like she’s doing Sophie’s Choice: The Series. [Laughs]

TVLINE | Which is why you cannot binge the show.
Everybody says that. The most surprising thing would be, and one thing I really appreciate about the set, is it’s very loose, very kind, and that comes from [executive producers] Bruce [Miller] and Warren [Littlefield], but especially from Lizzy. What’s so funny is, you know, we’re shooting in Canada, where they are stereotypically, genetically the sweetest human beings on the planet. And we’re shooting maybe one of the darkest shows ever. So the contrast… Like, the [assistant director] will wander in and go, [in Canadian accent] “OK, I don’t want to rush you, but I think we should get the nooses on the girls.” You know what I mean? It’s just like, oh my God. [Takes up accent again] “Oh, no, no, I’m sorry, you’ve got to spread your legs or we can’t see the commander. Sorry. Sorry. Sorry.” [Laughs] 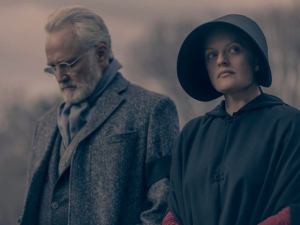 TVLINE | You’ve talked a lot about how former U.S. Secretary of Defense Robert McNamara is one of your inspirations for the Lawrence character. McNamara ultimately came to believe that the war he helped create was futile, and it messed with him on a psychological level. Do you think Lawrence is headed that way?
No. I think it’s possible that he could end up at that sort of pathetic, late-life stage of self-knowledge and self-reflection. But no, I certainly do not think he’s there… On a crappier show, a character like Lawrence is doing something quite horrible, has an epiphany, and becomes an unmitigated ally and champion of moving toward the light.

… Lawrence is clearly conflicted, and the reason he’s able to be conflicted I think is because of Eleanor, his wife — and Julie Dretzin, by the way, was just, like, absolutely perfect… I really don’t know where he’s going to land. I honestly don’t. I’m not trying to be cute, and I have a sense that Bruce isn’t sure either, and that just makes it more terrifying for June.

… You see it in Serena’s character. You see it in every character. There are these crosscurrents, which I realize just the older I get as an actor, it just creates a phenomenal performance possibility. I remember realizing, like, the fun of Get Out was, up until the end, there are simultaneously two things going on the entire time, and that’s really kind of luscious acting meat. 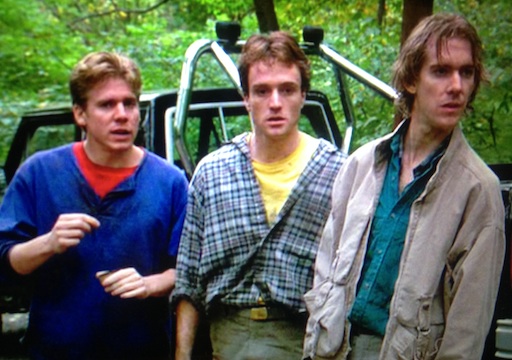 TVLINE | Do you think we’ll get a flashback to Lawrence’s pre-Gilead life this season?
I would love that. I love seeing Aunt Lydia back in the day, and I find those flashbacks really moving and kind of often the most terrifying and relatable, unfortunately, part of the show. You know, when you see the moment where June isn’t allowed to have a credit card, where there’s a lot of social unrest out there and things are getting weird. My God, again, I mean, I’m really worried about whether the president of the United States has pushed policies that we’ve reflected on the show — you know, people in cages. We’re actually talking about whether or not he’s going to accept the results of the election. It’s just unbelievable.

You’re sort of choking on a firehose cascade of insanity that is a Trojan horse for the darkest agenda, and that was true in the Gilead world. Currently, we have a fascistic president who is enabled by, of all things, the religious right, and we have cowardly politicians who are vulnerable to intimidation. It’s unfortunate. [The Handmaid’s Tale author Margaret Atwood] was imagining this back in the ‘80s when she wrote this.

TVLINE | Have you read the sequel, The Testaments?
I’m reading it right now. I just started it. I actually have to interview her, which will be fun.

TVLINE | I’m jealous.
What would you want to ask her?

TVLINE | Oh my goodness, so many things. But I don’t want to ruin it for you. Do you know what happens in the book?
No, I don’t.

TVLINE | I don’t want to ruin the book for you. But this does tie into The Testaments: As Season 4 begins, do you think Gilead is in a place where it can rebuild from the hits it’s taken? Or are we seeing the beginning of the end?
I think part of the thing that is allowing [Lawrence’s] humanity to peek out a little bit is the sense that this is not sustainable. I would argue it’s — at this particular moment at the beginning of this season — I think it is vulnerable, which gives me, as an audience member, hope. But it’s obviously very difficult to take down that structure. 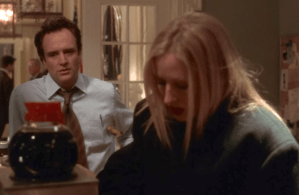 TVLINE | You’ll also reprise your West Wing role for a staged production of a Season 3 episode this fall. In “Hartsfield’s Landing,” Josh is very worried about the outcome of a specific election. How do you feel about playing that now, decades later and in a much different political context than the one in which the episode was written?
The urgency in this episode seems quaint now, in an election when the future of our democracy itself is on the line, not just a partisan argument about how we should all function within a democratic framework. We have a President who thinks the rule of law is for chumps, that any American who disagrees with him is “the enemy”, and has never met a murderous dictator he didn’t “fall in love” with.

When I make sure Donna doesn’t make a campaign related call from the White House, it’s important because the White House is The People’s House, not a partisan clubhouse. Donald Trump is about to accept his nomination on the White House lawn, desecrating yet another democratic norm.  The greatest threat to our national security is living in the White House as I speak. Josh could not imagine the stakes of this election. His head would explode.