Warning: The following contains spoilers for the series finale of Greenleaf. If you’d rather watch first, read later, off ya go.

The Season 5 — and series — finale of Greenleaf was, in a word, divine. It not only tied up the last of the OWN drama’s loose ends, it dangled a few new ones, tantalizing threads that we can only hope are explored in the spinoff. You can read what creator Craig Wright had to say about that in his TVLine interview. In the meantime, here are the highlights of “Behold”… 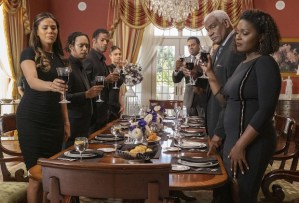 ‘WE ARE HIS BELOVED’ | As we feared it would, given the way that last Tuesday’s episode concluded, the hour started with Bishop taking a meeting with his maker. After Lady Mae slipped on the ring that she’d refused to wear earlier that day, she went downstairs to find Grace, who was on the phone being offered a job in New York by Ann, aka the woman who’d previously tried to hire her for 20/20. Did Gigi want it? She couldn’t answer, not just then. Following Bishop’s funeral, the family’s reminiscences were interrupted by a call from Misty: The deacons, minus Connie, wanted Lady Mae to lead the worship on Sunday and speak about James. The church, Misty added, was cutting its ties from H&H. And the congregation… well, “we need to come home to Calvary.” Later, Grace checked out the new home that Noah had bought for himself and AJ. Could Noah afford it? Sure, now that he was director of campus safety at Rhodes. AJ was doing well, too. His health was improving, and he was as eager to embrace his mother as she was to hug him. #progress He even cracked jokes about how anxious he was to meet Darius and ascertain what his intentions toward his mom were.

Back at the estate, Kerissa asked Jacob if Winkie could stay for a while as she looked for a place for them. The boy “needs to be close to his dad,” she said, “especially at a time like this.” When Jacob heard that his estranged wife was going to get a hotel room for the night, he invited her to stay in one of the mansion’s many wings, but she declined. “I know it might not seem like one now,” she told him, “but this is our happy ending.” (It certainly began to feel a bit more cheerful later in the episode… ) Alone with Grace, Darius encouraged her to call back Ann. Sophia would be in college soon, he noted, and AJ was an adult (and an adult who got along great with his dad). But what about, you know, them? Maybe the future he’d always wanted to discuss could be in New York, he suggested. Would he really follow her? “I didn’t say I would follow, I said I would accompany you there.” He was so sweet, he made Gigi cry. “I didn’t know ‘accompany’ was the magic word,” he chuckled. But that, it was. 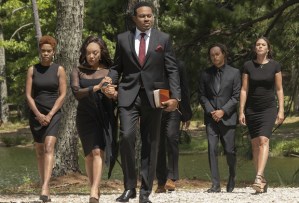 ‘IT’S JUST US AND THE LORD NOW’ | The following morning, while Grace dodged calls from Ann, Lady Mae reported for duty at Calvary, where Karine was only too happy to welcome her back. “I’m not back yet,” Lady Mae pointed out. Her fate, she figured, would be decided by her performance on Sunday. When Karine tried to offer her condolences over Bishop’s passing, Lady Mae asked that she not mention him. Until Sunday, Lady Mae said, “my heart is a truckload of nitroglycerine, and his name is a bump in the road, understood?” Understood. So maybe it was a bit overwhelming for Lady Mae to discover that Karine had had James’ belongings moved back into his old office — the office in which his widow was to prepare her sermon. Meanwhile, at Tara’s mission, Jacob asked if the family could have some extra time to move out, what with their patriarch dying and all. Tara did him one — one big one! — better. She’d been so impressed by how straight he’d been with her from the start, she wanted to just call it even and let the Greenleafs keep the mansion. (Personally, I’m shocked that Rochelle would go along with that, but mmkay.)

Back at the estate, Aaron helped Grace set up trusts for Sophia and AJ, and — as everyone who knew about the job offer did — encouraged her to return Ann’s calls. He figured her dilemma was sorta like his since-resolved angst about being gay. A friend had asked him what he got out of believing it was a choice? Nothing. So what did Grace get out of believing whether she took the job was a choice? If it was, she’d say no; if it wasn’t, she had herself a new gig in the Big Apple. When at last Sunday rolled around, Tara showed up at Calvary with her whole congregation. I hadn’t really seen them till this week, but there were definitely sparks flying between her and Jacob. “I know from Tasha you’ve always had a heart for the homeless,” she told him, adding that maybe in the future, they could work on helping that community together, the three of ’em. And form a fascinating love triangle in the process! After Charity sang the house down, it was time for the main event: Lady Mae’s sermon. To say that she gave a tour-de-force performance would be an understatement. She beseeched her flock to think about the spinoff — sorry, about the new, “not what this church has ever been but what it’s never been.” It was all but impossible not to be moved by her passion.

‘OH LORD JESUS, MAKE ME NEW!’ | By the time Lady Mae was through, it was clear that she would be Calvary’s pastor going forward; to not give her the post would have been an unforgivable sin. “Mom,” Sophia whispered to Grace, “I think your work here is done.” Heck, AJ was so touched by his grandmother’s faith that he joined the crowd being saved. After Mass, Gigi broke it to Lady Mae that she was going to interview for the job in New York. Her mother tried to protest — she needed Grace! — but in their hearts, they both knew that that wasn’t true. “It’s your time,” said Grace. “And it’s my time. Let us trust Him.” A day (days?) later, as Gigi was setting off for New York, the family said goodbye to her as if she wouldn’t be back from the interview shortly. Her mother, bringing the series full circle, thanked her for “sowing discord in the fields of my peace. I needed it.” With that, Grace was off. When her driver realized that she was Pastor Greenleaf, she corrected him. “It’s just Grace Greenleaf now,” she said. “I hope that’s the way you want it,” he replied. Giving the show a damn near perfect ending, she answered him, “Me, too.” So, what did you think of the series finale of Greenleaf? Grade it in the poll below, then hit the comments with your reviews. Then, click here to read what the show’s creator told TVLine about ending Greenleaf and beginning its spinoff.