Warning: The following contains the kind of spoilers for Tuesday’s penultimate Greenleaf that will leave you screaming “Lord have mercy!” — and not in a praying way.

Early on in Tuesday’s Greenleaf, Bishop did his damnedest to sell AJ on the notion of being saved, promising his grandson that once he let God into his life, he’d flash a smile that was equal in magnificence to “10 Grand Canyons.” But in hopes of making his hard sell come off like a soft one — too late for that, pal — James added that there was, you know, no rush. Except that there was. A major one. Because by the end of the episode, it appeared that Bishop wouldn’t live long enough to see AJ have a come-to-Jesus moment! What in heaven’s name happened? Read on… 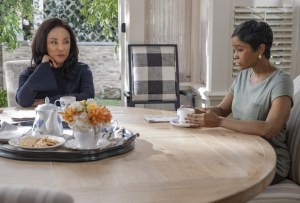 ‘I WON’T PLANT THIS NEW CHURCH OF MINE IN THE SHADOW OF ANOTHER SCANDAL’ | As “The Seventh Day” began, Grace bailed Darius out of jail. He wasn’t dead — whew! — Bob had just had him thrown behind bars for driving around high on PCP and resisting arrest. As if! While Darius took off to meet with the family that was going to inform on Eden Vale Lending, Gigi headed for a sit-down with Aaron. It seemed that when City On a Hill bought that land from Jacob and Kerissa, their affiliation with H&H hadn’t been disclosed; if that was the case, the Greenleafs might be able to get a cease-and-desist order in time to stop the church from being bulldozed at 2. That’s right, folks! Buckle up — this hour was going fly by so quickly, it felt like we were watching in fast-forward!

At the Greenleaf estate, James served Lady Mae breakfast in bed and, hoping she’d agree to move up their wedding date, presented her with her old engagement ring. “You said yes the first time I gave it to you,” he noted optimistically. Unfortunately, she refused to budge, not until they came up with a compromise to offer Tara and Rochelle. In turn, he refused to budge. “Offering Tara anything,” he argued, “is like admitting I’ve done something wrong.” That being the case, “this,” she said, rejecting the ring, “will have to wait until Flag Day.” Elsewhere in the house, Zora pressured her dad to find out if she could stay in Camilla’s guest bedroom in Hoboken — “a phrase,” she added, “I cannot say without dissolving into a pool of steamy gray uncoolness.” Since Jacob hadn’t done so — Kerissa and Winkie had just left a day earlier — Zora suggested a studio apartment that she’d found in Brooklyn. He had to love that, she thought. It was so small, it had “no room for a boy.” Later, she went so far as to suggest that Sophia go East with her — and no, not only to foot the bill. Although, yeah, that, too. 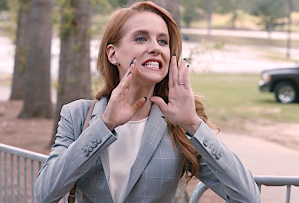 ‘CAN WE AT LEAST DESTROY SOMETHING? THANK YOU!’ | At Calvary, Judee looked like she was about to start tearing apart the church by hand when Grace and Aaron showed up with a temporary injunction to stop the demolition. Fernando’s failure to disclose City On a Hill’s association with H&H, they explained, constituted real-estate fraud. But Kerissa knew about the connection, Fernando said. “She enjoyed it, even — immensely.” (Dude, ew.) Lickety-split, Gigi called Jacob, who called Kerissa, who admitted, um… oh… yeah, she knew. (Oh, Kerissa!) Then Noah showed up at the church — told ya s–t was happening right, left and center this episode! — to say that he’d found Otis, Mrs. Davis’ old caretaker. When AJ’s parents sat down with the geezer, he finally revealed the connection between “that Negro” Darryl and Mrs. Davis: He was her secret son!

Back at Greenleaf Manor, Lady Mae suggested to Tara that the family could sell some land and give the young woman and her sister a nice payment. Alas, no way would Rochelle go for that, Tara said. She wouldn’t rest until Bishop confessed that he’d murdered their father. Later, James, Lady Mae and Charity were watching a news report about how Bob would be announcing his Senate run at the demolition when in came Gigi with her bombshell about Darryl and Mrs. Davis. Call Rochelle and Tara, Bishop told Lady Mae, and tell them to come over. For real? “Just trust me.” Once Tara and Rochelle arrived, Bishop and Lady Mae informed them that Mrs. Davis had been their grandmother. As such, “we’re ready to concede that your blood ties to this property preceded our legal ones.” As Tara predicted, Rochelle wasn’t satisfied. She wanted the truth. Well, she could have that, too, said Bishop. With that, they all headed to Calvary, where the pews had been filled up with folks who’d received an email from Charity saying to come to church if they wanted the dirt about Bob.

‘JAMES GREENLEAF TOOK ADVANTAGE OF YOU’ | Off his meeting with the family whose home Eden Vale had stolen years earlier, Darius informed Grace that CBS was suddenly interested in his Bob exposé. At that very moment, the would-be senator was inside Calvary trying to spin the scandal into fake news. But Grace and Charity held him accountable for his past actions, informing the congregation that all of Eden Vale’s clients had been Black and challenging Bob to explain why Phil’s mother’s name had been on every loan. When Bob wouldn’t do so, Phil stepped up, recalling that in his mother’s final days, she had feared that God wouldn’t be able to forgive her for what she’d done. “I think I know now what she meant.” With that, he took back her engagement ring from Judee, who — classy till the bitter end — dropped it on the ground rather than hand it to him. Next up was Bishop, who entered surrounded by family and proceeded to call himself out for never having questioned the connection between Darryl’s death and his own good fortune. (If he hadn’t gotten the house, after all, he wouldn’t have been able to get the loan for Calvary.)

To his credit, Bishop was merciless with himself. He admitted that as the money started rolling in, he all but bathed in that original sin of his. He had it all, but “it wasn’t success,” he said, “it was a succubus, a demon of wealth and power seducing me.” (Side note: Where do I get one of those?) He’d been meant to show his flock what is possible with God… and instead only showed them what is inevitable without him. The congregation wouldn’t hear it, though. They supported their pastor, and as Charity sang “Amazing Grace,” the song seemed to drive out of the church Bob, Judee and Fernando. As Rochelle left, Grace stopped her. She knew that the troublemaker had only given AJ Noah’s number to mess with her — and she still wanted to thank her; it had turned out to be a great blessing. Hey, replied Rochelle, “God can use anybody, right, even a mean old sinner like me.” Stealing a moment with Charity, Phil, obviously angling for a second chance, apologized for his horrific behavior. “Phil, no one, not even the father of my son, has broken my heart the way that you have,” she replied. “I would never trust you with it again.” Way to go, Charity! Shut. That. Book. 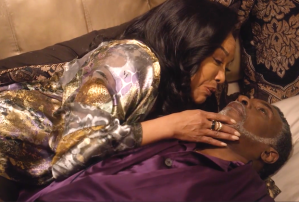 ‘I DO’ | As the hour careened toward its conclusion, Darius reported to Grace that the now-public Bob scandal had prompted him to step down from H&H. Clearly reunited, the couple kissed passionately — and would’ve gone back to his place, had Sophia not needed to talk to her mom. The topic? Sophia wanted to assure Gigi that she’d never again do anything as dumb as send a topless picture to a boy. What topless picture? Gigi asked. Oh, man, Zora got her cousin and good! Hilarious! She’d never blabbed! Meanwhile, Lady Mae gussied herself for a night of passion with Bishop. As she climbed into bed, she told him that she wanted to get married the following day. He didn’t jump for joy, though. He was… unresponsive. Had he had a stroke? He couldn’t speak but indicated that he wanted a pen. With it, he wrote, “I do.” Dunno about you, but I was crying right along with Lady Mae by that point. “I do, too, my love,” she said. She called an ambulance, but the way Bishop collapsed on the bed… it looked like it might already be too late! Ack! Your reaction to “The Seventh Day”? Dry your eyes, and hit the comments with your predictions about how the series will (sniffle) end.