Warning: The following contains spoilers for Tuesday’s Greenleaf series finale. If you’ve yet to watch, you might want to before reading any further.

Although it was hard to rejoice watching Tuesday’s Greenleaf, knowing as we did that it would be the last time the OWN drama took us to church, we still couldn’t help but let out the occasional hallelujah. (Yes, it was that good; click here to read the full recap.) Joining TVLine to unpack the series’ ending — and the promise of a new beginning that it included — is creator Craig Wright.

TVLINE | Tell me about the decision to have Bishop die. Did you know that was going to happen from the start of the show?
I didn’t quite know it. I knew that the series was inevitably going to have to be about the eclipse of male power, because the male power in the Black churches, it’s like the sacred cow. It’s the thing you’re not ever allowed to kick at. So I knew that if we were gonna tell a story that had any live energy, it was gonna have to be about gnawing away, in the most respectful way, at the foundations of male authority. But I did not exactly have in mind that the Bishop had to die. As we got closer and closer to the end, I just realized that anything less than that was going to feel tired. 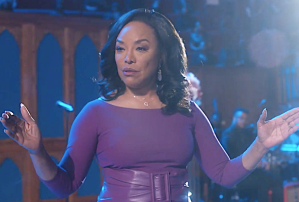 TVLINE | As if she hadn’t a million times already, Lady Mae really came into her own in the finale — that sermon was fire! Is it safe to assume that the spinoff will focus on her new role as pastor of the church?
I think Lady Mae’s new role as the pastor of this church or another church is definitely going be the tentpole of whatever we do next. When I saw her [preaching], it made me even more excited about the spinoff, because when you hear Lady Mae talking about how to love the past enough to let it go and how to look for the future, it’s just so exciting to me to do another chapter in the story.

TVLINE | Lynn Whitfield has got to have become for you what Jessica Lange is for Ryan Murphy: a muse.
A muse, a resource… She has as much if not more of a vision of what this show can accomplish for its audience than I do. And I have always thought of her as one of my most important partners, along with Oprah [Winfrey], in figuring out what the show is.

TVLINE | I feel ghoulish asking — Bishop’s body isn’t even cold yet! — but have you contemplated what it would look like for Lady Mae to find love again?
Oh, I think even if we trotted out Idris Elba with a Bible in his hand, Lady Mae would have a hard time moving on. But as Lynn always reminds me, Lady Mae is a sexual woman, a woman of passion and desire. So eventually, she would come around. But we can’t make it easy. If it was easy, Lady Mae’s character would break. 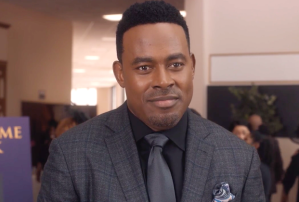 TVLINE | Am I right that you were laying the groundwork for a possible Tasha/Jacob/Tara triangle?
Completely. That was exactly what I wanted to do, because… well, it’s obvious why! Tara is so sweet and gentle, and Tasha is so, you know, fiery and a little bit silly — but adorable. I think it’s a great set of options for Jacob to consider as he continues to try to find his moral and masculine center as sort of the last standing male in the family.

TVLINE | Charity made an amazing transformation over the course of the series. What do you imagine the next chapter of her life looks like? Does Phil stand a chance someday, or is she as done-done with him as she said?
Phil won’t be back until Season 3 of the new show. But where Charity’s concerned… the most exciting thing to do when we see her next time is to find her being the peaceful and still repository of wisdom and strength. Just totally turn [the character] on its head and have her be someone who is a resource to everybody while her mother, oddly enough, is struggling to control the giant machine that she’s in the middle of leading.

TVLINE | Meaning the church, or… ?
A larger amalgamated church that’s living in the shadow of the Black Lives Matter movement and COVID-19 and trying to figure out what the gospel means in that immensely pivotal time.

TVLINE | Will Grace be a part of the spinoff at all?
Well, I feel certain that she will be a part of a story. In what way remains to be seen. Grace needs to go find her destiny. It isn’t in the church — at least not In today’s church. I see Grace more like Oprah. She’s someone who has to find a place in popular culture where she can really lead a secular movement.

What do you think? Based on Wright’s description, will you be tuning in for the spinoff? Hit the comments with your thoughts.