Friendly warning, Psychos: We’re about to spoil the plot of Psych 2. Haven’t watched? Flock to Peacock!

With the arrival of Psych 2: Lassie Come Home, Shawn and Gus are once again up to their pineapples in mysteries — some of which they actually manage to solve!

Picking up shortly (let’s say… three years?) after the events of 2017’s Psych: The Movie, this latest work of cinema finds Lassiter recovering from a stroke, which he suffered during an emergency surgery after being shot six times. But when Lassiter begins to suspect that something is amiss at his recovery facility — the “prestigious” Herschel House — he calls in Shawn and Gus to investigate. They’re initially hesitant to lend a hand, especially because they feel guilty for lying to their significant others about their whereabouts, but the discovery of a severed human hand in the hallway is enough to spur them into action.

Their first stop is the old Psych office, which is now being rented out as the health department’s worst nightmare — a pop-up cat café (or “cat-feteria,” if you will). What’s more, because Shawn and Gus never technically told their landlord that they were leaving, Shawn’s father has been illegally subletting it for years. Still, that doesn’t seem to bug Shawn half as much as the fact that his father watches a certain NBC drama. (“Dad, why are you watching This Is Us?” he asks. “They have the same show on ABC, but newer!” This, of course, is a brilliant little nod to A Million Little Things, which counts James Roday Rodriguez as a series regular.)

After their old coroner pal Woody connects the hand to a presumed-dead CEO, Shawn and Gus trace the man’s final steps to a terrifying viking bar up in the mountains. Their pub crawl turns out to be a total disaster, from the owner being fresh out of their preferred earmuffs to Gus accidentally snapping (and tweeting) a picture of a murderous Norwegian’s gennies while standing next to him at the urinal. Shawn and Gus are understandably chased out of the bar by angry bikers, only to accidentally (and literally) crash into Devon Tileback, the “dead” CEO with the missing hand. He’s able to share a vague warning (“You’re ruining everything! More people will die!”) before being shot, this time fatally, by an unseen gunman. 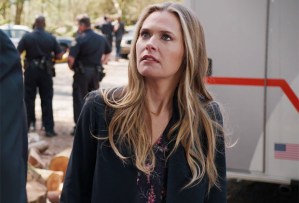 That’s when things get complicated. Juliet, who has been looking into Lassiter’s shooting against Karen’s orders, arrives on the scene with Gus’ girlfriend Selene in tow. Thanks to Juliet’s poor choice of words, she has reason to suspect that Gus is cheating on her with Lassiter’s nurse (played by Scrubs‘ Sarah Chalke). The guys, who are also attempting to keep their investigation under wraps, manage to avoid being spotted… but not before discovering a positive pregnancy test in Juliet’s car! Dun, dun, dun!

Unfortunately, Shawn doesn’t have much time to process his impending fatherhood before he and Gus accidentally make a game-changing discovery: Wilkerson, a supposedly non-responsive patient at Herschel House, has been faking his condition! He reveals that he was Devon’s silent partner and had been helping him cook the books. One day, Wilkerson suddenly found himself “recovering” at the Herschel House, unaware that his ice chips were laced with psychotropes. Under the influence, he confessed everything to Dr. Herschel, who presumably shared that information with a masked hitman — perhaps the same one who shot Lassiter!

With an assist from Juliet — who isn’t thrilled that Shawn kept his investigation from her, not that she’s one to call the kettle black in this situation — the guys deduce that the viking bar owner is clearly the gunman in question. That theory takes a minor hit when they discover the owner’s corpse chilling in his own freezer, but the blame is quickly shifted to his son (aka “bearded Daryl Hannah”). What follows is a zany whirlwind that culminates in an arrest… and a proposal! The pregnancy test was actually Selene’s, and once that information comes to light, she pulls out a ring and makes an honest man out of Gus. She even promises, or at least promises to consider, moving next door to Shawn and Juliet, connecting the two homes via adjoining pools and a lazy river that goes through their living rooms. (We need more of these movies, if only to see that dream come to fruition.) 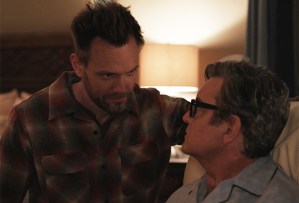 Meanwhile, a tense confrontation between Lassiter and his nurse reveals that she‘s been the mastermind all along! It’s actually quite a powerful moment. When she begins to administer a deadly serum, Lassiter is initially accepting of his death, feeling that he’s of no use to anyone in his current state. The ghost of his father (played by Joel McHale), who has been appearing to him throughout the film, finally offers these devastating words: “Be the husband and father I didn’t get to be.” Not only does Lassiter summon the strength to whip out a concealed gun, but he also shoots his IV and restrains his nurse until the police arrive to take her away.

For those who may not be aware, Timothy Omundson suffered a stroke in real life, making his character’s storyline — especially that final moment where he stands up and looks his loving wife in the eye — even more heartwarming. Speaking with TVLine in October 2019, the actor said, “I credit [my Psych family] with so much of my recovery. Right from the beginning with the first Psych movie, when they rewrote the character to give me that cameo… was just incredible. And [star] James Roday [Rodriguez] and [series creator] Steve Franks were visiting me in recovery all the time to see how I was coming along. And just knowing that they were going to take care of me on the set and in the script and to write the story around my disability was [incredible].”

Your thoughts on the second Psych movie? Grade it via our poll below, then drop a comment with your favorite moments and one-liners.