Three years have passed since Shawn Spencer’s engagement ring was stolen (mid-proposal!) in the series finale of USA Network’s Psych — and wouldn’t you know, he still hasn’t gotten that darn rock back. 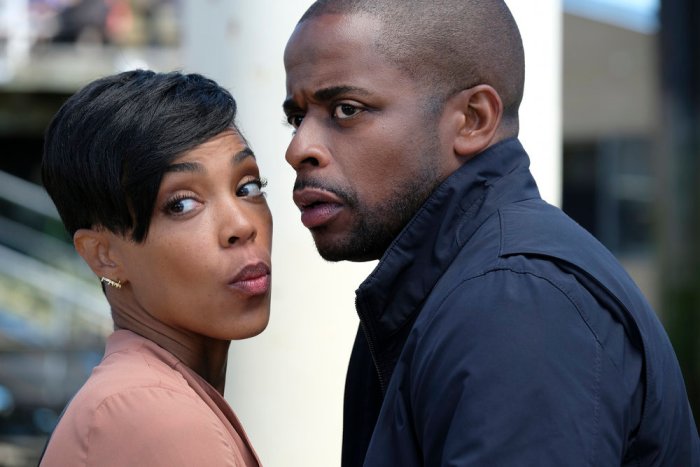 In fact, Shawn’s lack of a ring — and lack of an engagement, for that matter — was a running theme throughout Thursday’s Psych: The Movie, in which Shawn and Gus reunited to take down a mystery baddie with a vendetta against Juliet.

Per a shady tip from Nick Conforth, one of many familiar faces to pop up in the two-hour holiday event, Shawn and Gus broke into a condemned psychiatric hospital, where they learned that Juliet’s unknown enemy had compiled a list of her alleged misdeeds. They also “liberated” a rescue-turned-attack dog and “gifted” it to Chief Vick — but that really wasn’t part of the mission. Nor was it well-received.

During their individual crises of faith — shortly after the middle of the film, when all good crises of faith take place — Shawn and Juliet turned to two very different sources for comfort; she made a call to Lassiter, who assured her that it’s OK to get “creative” while apprehending criminals, while Shawn’s relief came in the form of a dream, one that ended with the late Mary Lightly joining him for a killer duet.

Juliet initially believed the mastermind to be her old informant, Billy McGoldrick — played by Zachary Levi, who looks surprisingly good as a blond and sounds surprisingly believable with a British accent — but he turned out to be a mere puppet for Allison Cowley (played by Mena Suvari), whom Juliet helped put away back in 2010. [Insert that gif of the cat with its mind being blown here.]

A three-part melee ensued, with Juliet using her kip-up skills against Allison (those classes were worth every penny!), Woody and Henry barely holding their own against a badass lady whom the guys dubbed “Heather Rockrear,” and Shawn and Gus running (and screaming!) in fear from a sword-wielding “black gentleman ninja.” Really, there were just a lot of nicknames being thrown around — as if you’re surprised.

The baddies were eventually apprehended, but that’s when the fun really began: El Proveedor — a crime lord we met at the beginning of the movie when Shawn infiltrated his operation disguised as Hagrid from Harry Potter — not only found Shawn’s missing engagement ring, but also officiated his spur-of-the-moment wedding to Juliet!

And don’t worry about ol’ Gus; he also found love in the form of an Instagram-stalking, planet-obsessing, fluffernutter sandwich-making beauty named Selene. Sure, she’s a little intense, but she’s cool with letting Gus be the “cheetah” of the relationship — and what more could he really ask for?

The movie ended with Shawn and Gus preparing to leave Psychfrancisco (lol) for Shawn and Juliet’s honeymoon — what, you didn’t think Gus would tag along? — only to be interrupted by a surprise visit from none other than Juliet’s brother Ewan (played by John Cena). I’m not sure if its the fleet of gunmen on Ewan’s trail, or the explosive “gift” he brought for Shawn, but something tells me the guys are not making it to the airport on time.

Our Favorite Quotes and Other Moments of Excellence:

* Those were some stellar harmonies on Gus and Shawn’s little “suck it” song. They’ve still got it.

* I also love that Gus plays Pokémon Go. It feels very Gus. (“You know this is how I manage my stress!”)

* “Don’t be ridiculous, Jules would never do a Hallmark movie” was a great line — mostly because her portrayer, Maggie Lawson, has done several. In fact, her latest, Christmas Encore, premieres this weekend!

* But my personal favorite line was Shawn’s reaction to his dad’s curious new look: “Dad, I specifically asked you to dress for dinner, not Adam Levine’s funeral.”

* And that faux-Marvel title card at the beginning? Brilliant.

What did you think of Psych‘s long-awaited return? Any favorite moments and/or returns? Grade the movie below, then drop a comment with your full review.