After perfecting the art of deception and tomfoolery over the past eight years, Shawn was finally forced to confront the truth in Psych‘s series finale — and it was a complete disaster.

RELATED | Psych Out: USA Network Staple to Conclude in March After 8 Seasons, With Answer-Filled Finale

It took him 30+ minutes and an entire murder investigation to finally muster up the courage to tell Gus he was moving to San Francisco with Juliet, and even then, he couldn’t do it in person. He broke the news in the form of a DVD recording, which is pretty much the friendship equivalent of breaking up with someone in a text message.

Angry and confused, Gus — after changing his mind 12 times, stealing a driver’s ed car and getting maced by a sexy co-worker (We Bought a Zoo was wrong!) — followed Shawn to San Francisco, ensuring that both their friendship and their sleuth-ship will continue on forever and ever.

Here were a few key moments we got Psych‘d about during the finale:

* Shawn’s proposal to Juliet was a total tearjerker, even if she technically said yes to Gus first. And even though a burglar snatched the ring before Jules actually got a chance to put it on. Other than that, perfect.

* The identity of the oft-mention Dobson was finally revealed, and he turned out to be… Val Kilmer?! I appreciated that.

* Shawn’s message for Lassiter included the truth about his fake psychic abilities, but Lassiter stopped the DVD — and destroyed it — before he heard that part. I guess it didn’t matter, after all.

* After refusing his dad’s help for basically forever, Shawn finally caved and called his dad for help. (Take that, Billy Zane!

What did you think of the Psych series finale? Browse photos from the episode and rate it below, then drop a comment with your full review — and your fondest Shawn/Gus memories. 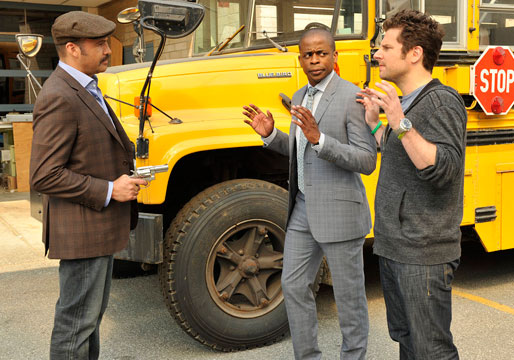