Sara Bareilles still isn’t going to write you a love song, but she will happily offer up the early days of her songwriting career as inspiration for an earnest new Apple TV+ drama.

Little Voice, which premieres Friday on the streaming service, draws heavily from the Grammy winner’s life and experiences. It follows a fledgling artist named Bess (Star‘s Brittany O’Grady) at the start of her journey in the biz. (Watch a trailer.) But Bess is not a lightly fictionalized Sara, Bareilles is quick to point out during a chat with TVLine.

“We learned really early on that it was not helpful to the show to lock into this being my story,” she says, recalling a conversation with executive producer Jessie Nelson (with whom she collaborated on Broadway’s Waitress) in which the EP put a fine point on the lead character. “She’s like, ‘This is not you,'” Bareilles says. “‘We are creating her world, and it’s inspired by you, but it has to have its own soul and its own universe to inhabit.'”

Bareilles adds: “So it’s not a play-by-play, but there’s lots of little anecdotal evidence of me in there.” 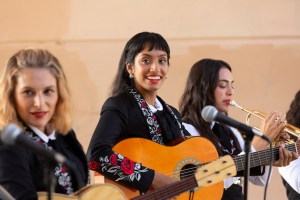 The series opens with Bess rushing around New York City, scrawling lyrics in a journal during rare quiet moments in a day otherwise packed with side hustle gigs like dog-walking and cocktail waitressing. The first season contains many nods to the Big Apple’s diverse music scene; Bess’ roommate is a member of an all-female mariachi group, and Bess’ father sings gorgeously layered harmonies with friends on subway platforms.

“One of Sara’s and my favorite thing to do is to take long walks in the city. And even if you take a half-hour walk, you’ll go through five different kinds of music from five different cultures,” Nelson says. “That isn’t something that you have to make up or heighten: That is the fabric of the city.”

Bess’ musical aesthetic essentially is Bareilles’; about half of the songs featured in the series “were actually drawn from a little pile of songs that were living and didn’t have a home yet and just happened to live perfectly inside the show,” the songwriter says, while some were co-written with frequent collaborators like Jack Antonoff, Lori McKenna and Justin Tranter. “Unless we’re featuring a song from another artist, I am definitely composing the music for the show,” she adds.

That fact became both an honor and a point of intimidation for O’Grady, who’d starred in a musical network series before (Fox’s Star) but had never carried a show on her own. Working with Bareilles, though, quickly assuaged any worries. “I just think that she is an incredible human being, and I have so much respect and so much admiration for her musical genius,” the actress says. “She’s out of this world.” 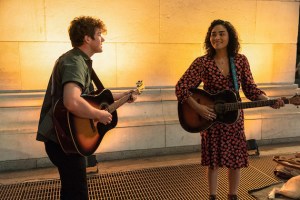 O’Grady says it helped that Bess “is a little closer to who I am” than was Star‘s Simone, whose tortured life was very much a piece with the primetime soap in which she existed. Bess’ life, though not without its own set of stakes, is decidedly more down-to-earth. “For the first time, I am playing a character that had these quirks and different personality traits that were just, like, adorable, but also, ‘Oh God, did you really just say that on stage?!'” she says, laughing. “I feel like I’m that kind of person, so I identified with her more and was able to go to a different place without using my imagination so much.”

Nelson says she remembers being quite taken with O’Grady from her audition, which was conducted over video call while the actress was working in New Zealand. “She just had this very indomitable spirit to her, and that’s a big, to me, part of Sara’s essence,” the EP says. “I think we were both very endeared to her very quickly and then grew to discover what a searching soul she is, so that fit the character really well, also.”

Much of Bess’ soul-searching, however, takes place in her head — and Bareilles says that transforming her songwriting process into something that would hold an audience’s attention was the subject of many a conversation between Nelson and herself.

“That was one of the things I remember we dug into really early on, creatively, was having to address the fact that songwriting is such an internal process, and how do you make that interesting to look at?” Bareilles says, hailing Nelson’s “tendency to pull the inside out of me, personally, and I think she did the same thing with the show.”

She adds: “It’s not that interesting to watch someone sit and scribble on a notepad for two hours, so I think we did a good job of balancing the fact that her ideas come from the world and from relationships. So it’s important to spend a lot of time there.”

Are you planning to watch Little Voice? Hit the comments and let us know!