In a statement, Leslie — who will make her debut in the show’s Season 2 premiere, slated to air in January 2021 — said, “I am extremely proud to be the first Black actress to play the iconic role of Batwoman on television, and as a bisexual woman, I am honored to join this groundbreaking show, which has been such a trailblazer for the LGBTQ+ community.”

As previously reported, Leslie will play a new version of the titular superhero as opposed to taking over Rose’s Kate Kane. Her character, Ryan Wilder, “is about to become Batwoman,” reads the official description. “She’s likable, messy, a little goofy and untamed. She’s also nothing like Kate Kane, the woman who wore the Batsuit before her. With no one in her life to keep her on track, Ryan spent years as a drug-runner, dodging the GCPD and masking her pain with bad habits. Today Ryan lives in her van with her plant. A girl who would steal milk for an alley cat and could also kill you with her bare hands, Ryan is the most dangerous type of fighter: highly skilled and wildly undisciplined. An out lesbian. Athletic. Raw. Passionate. Fallible. And very much not your stereotypical All-American hero.”

In explaining the controversial decision to eschew a traditional recast and instead create “a whole new character” to slip into the cape and cowl for Season 2, showrunner Caroline Dries previously said, “To be honest with you, I did consider the ‘soap opera version’ [of recasting] for a hot minute, because selfishly we already had a couple episodes written, and transition-wise it would be seamless. But upon further reflection — and I think [Arrowverse EP] Greg [Berlanti] helped me make this call — he’s like, ‘I think we should just reboot Batwoman as a different character.'” 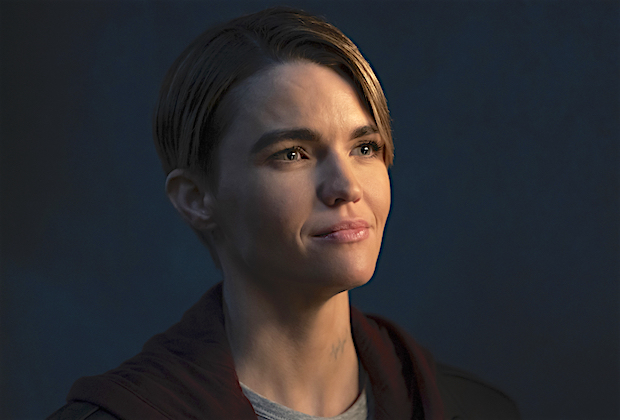 In addition to paying “respect to everything that Ruby [Rose] put into the Kate Kane character” during Season 1, Dries added, “it also helps the audience, because we’re not asking them to address ‘the elephant in the room'” by accepting a new face as the same person.

Rose’s Batwoman departure was announced in May. “I have made the very difficult decision to not return to Batwoman next season,” she said in a statement. “This was not a decision I made lightly as I have the utmost respect for the cast, crew and everyone involved with the show in both Vancouver and in Los Angeles.” (See Rose’s reaction to the recasting news here.)

In a subsequent social media post, Rose addressed our report that she underestimated and thus eventually balked at the long hours required to star in a weekly TV series that shoots in Vancouver, leading to a mutual “breakup” with the show. “Don’t believe everything you read by anon sources online,” she wrote. “I lived in Vancouver for a year working on the mountains when I was 18 because I love that city! I’ve also worked in other places in Canada… perfect beautiful country.”

Warner Bros. and The CW previously confirmed that, much like Rose’s Katy Kane, the new character would be an out lesbian played by another LGBTQ actress. “The studio and network are firmly committed to Batwoman’s second season and long-term future,” they said in a statement, “and we — along with the show’s talented creative team — look forward to sharing its new direction, including the casting of a new lead actress and member of the LGBTQ community, in the coming months.”

In addition to being a series regular on CBS’ recently cancelled (and also Berlanti-produced) God Friended Me, German-born Leslie’s other TV credits include the BET drama Family Business and CBS’ MacGyver.