“Maybe there’s a lot we don’t know about the people we love” could be the tagline for Netflix’s post-apocalyptic animated series Kipo and the Age of Wonderbeasts… and, oddly, it fits pretty well for NBC’s family drama This Is Us, too.

Sterling K. Brown plays This Is Us‘ Randall and voices Kipo‘s dad Lio. In a recent chat with TVLine, Brown was more than happy to talk Kipo Season 2 (now streaming) and to give us a little more intel about his previous hints regarding This Is Us‘ Randall in Season 5. (Pro tip: You’re going to want to pay extra attention when he starts talking about everyone who may or may not be connected to a certain character we know…)

TVLINE | It seems like this season of Kipo is more focused on her and her dad, the flashbacks to that relationship. Talk to me about the feel of these episodes.
It’s interesting, because I’ve watched all of Season 1 with my kids, and we’re through Episode 6 of Season 2  — just because we’re all watching it together — and I know things that are coming, and it’s nice for them to see it as it’s all percolating, right? Let’s see. It’s almost like this journey of self-discovery for her, but the first part is sort of her galvanizing with her group of friends… They’re solidified, now, right? At the end, we see the Paw comes through, and I just got to the place where the kids saw her go full jaguar. [Laughs] But seeing the beginnings and learning that, oh, her parents did this on purpose, right? And being like, that’s really cool. It could go a couple of different ways… She sort of luxuriates and celebrates her individuality in a really lovely way. I think they’re such an interesting group of individuals that all appreciate each other for being who they are. 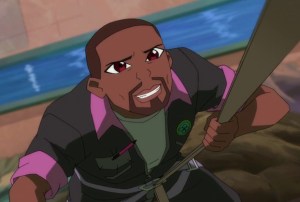 And then the flashbacks with me… It is funny, and I will say this real quick: Looking at the cartoon and hearing my voice, every once in a while, it’s like, oh, that is… they got me pretty good! [Laughs] [But] that’s not me at all! They drew the character before I had anything to do with it.

But it’s really nice to see the love that this father had for his daughter, that this mother and father had together, because we get a chance to see more of Mom in Season 2, as well. And then to learn that Mom becomes the Mega, right? And so, and now my kids don’t know exactly who Hugo is. They’re still learning Hugo, Scarlemagne, that type of thing. I’m waiting for them to turn on Dad. We’ll see if they do or not, but it’s interesting to see. Because there are such benign and hopeful beginnings and wanting to give people this freedom, give the animals this freedom to evolve and become fully who they are. And now, things have gotten in a place where it’s not fully under their control, but these entities still deserve the opportunity at life, right? So, it’s an interesting thing to see the science of it all and the moral dilemmas that they face through the whole thing. But I think they make a decision that they think is most correct. I don’t know if they would’ve done anything different. Maybe, maybe not.

TVLINE | It’s very of the moment to have a show where creatures want the right to be who they say they are, regarded the way they want to be regarded.
It really is. And it’s so interesting, because when I was first watching Season 1 with my oldest son, Andrew, he says, “Dad, everybody is Black.” And I was like, “They kind of are!” [Laughs] Which is really cool, and it’s not anything that we talk about. It’s not anything that they’ve grown up with, but it’s just like, I get a chance to see myself in this cartoon. Like, it was enough for him to recognize that he had to say something about it, right? 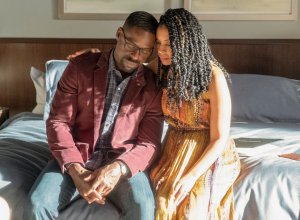 TVLINE | Along those lines: I want to hear what you have to say about Randall and This Is Us given the Black Lives Matter movement’s prevalence right now. The show has shown us how Randall has encountered microaggressions his entire life. And now he’s an elected official in a city with a constituency that is predominantly Black: Can you speak to how real life might influence his storyline on the show this season?
Yeah. I can say this. I’ve had conversations with Dan [Fogelman, executive producer] and the writers from our show, and I know that the world is necessarily going to impact the world of the Pearsons, right? He doesn’t want us to be too specific with regards to what we’ll be seeing in Season 5. Number 1, there’s thoughts that were percolating in the writers’ room with regards to how and if to address the pandemic, right? And then over the past month/five weeks, there’s been, you know, since Ahmaud Arbery and Breonna Taylor and then George Floyd and others who went out before, right, there’s now like, “How do we address this, too?” And so they’re still — not knowing when we’ll be going back [into production] — wanting to reserve this space to say, “What else is there that’s going to be transpiring in our world that we also may want to incorporate into our show?”

So I know that everyone is paying attention, and that our intention is to reflect the world in which we live. I don’t think our show is, say, The Good Fight in the way that [that show] directly takes on the trouble that happened. It is in the world, but our universe is our own, as well. So, it gives us the freedom to say what things do we want to lean into and what things do we not want to.

I do think there’s really interesting conversations going on in the writers’ room and conversations that we, as a cast, have had… When we talk to each other, it’s really a lovely reflection/microcosm of what’s going on in the world. And I remember [Susan Kelechi Watson] and I, specifically, we were talking about how many of our castmates, how many of our friends, how many associates throughout the world reached out to us during this time to be like, “What can we do? Can we do something? If you need to talk,” like all these sorts of things, which were really lovely and warming of the heart — and simultaneously overwhelming. I don’t know what you can do! [Laughs] I appreciate it, but right now, I’m just trying to figure out how to homeschool this little boy. You know what I’m saying here? [Laughs] There’re so many other things that are going on through your head, as well, so I definitely know that it will reflect the world. In terms of how exactly it’ll transpire, you’ll have to give me a little bit more time before I can get specific. 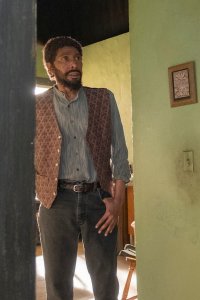 TVLINE | You had hinted earlier that we might see a little bit more of an exploration of Randall’s past in a way that we hadn’t seen, and you mentioned the episode “Memphis.” That makes me think that this revelation is going to be big — but is it a huge emotional impact? Or are you maybe telling us it has something to do with William, as well? Can you give us a little more guidance on that?
It is an excavation of Randall’s past, connected to family again, so I think it’s going to be a really soul-searching sort of thing. It’s like… I’ll give a real-life example, and then you can draw whatever parallels that you want from it, right? My wife didn’t meet her biological father — this is kind of eerie to the show — until she was 34 years old. She had been told this one thing in her life. And then, as we were embarking on the possibility of having children, she was like, “Mom, is there any possibility, something else could be out there?” And [her mother was] like, “Well, there’s this one possibility. If you want to go talk to him, fine, but I’m your momma.” Et cetera.

So, we went to St. Louis, Mo., where we’re both from, Ryan [Michelle Bathe] and myself, and she got the number for this man, and she called him up. And he’s like, “Yeah, I would love to meet you. We can meet at the mall.” So, I went and did Christmas shopping while she was at the Cheesecake Factory in the mall… Now, I went and I sat down with them, and I was looking at a dude who looked just like my wife, and I was like, what?! [Laughs] Right? And so, it really was a wonderful opportunity for my wife to get to know this whole other side of her family that she didn’t even know, and she’s wound up getting a sister out of this whole thing, and they’re very close. And she has a niece, now, and it’s really a lovely thing.

Got any predictions for This Is Us Season 5? Let us hear ’em in the comments!