Friday’s episode of RuPaul’s Drag Race All Stars paired up this season’s fiercest frenemies (who knew there were so many?) for a TMZ-inspired challenge, reminding us that the tastiest drama is often unscripted.

Of course, things were already dramatic in the workroom even before the queens were forced to literally act out their drama on camera. Following Mariah Paris Balenciaga’s elimination, the queens convened backstage, where Mayhem Miller and Alexis Mateo both admitted to voting for Shea Coulee. Neither queen had a particularly good reason for doing so, but at least Mayhem admitted that the decision backfired big time.

Then came this week’s challenge to throw a little more salt in that wound. Let’s see how each of the queens’ teams fared:

INDIA AND MAYHEM | Playing a shoplifter brought up uncomfortable memories for India Ferrari, who apparently did quite a bit of stealing when she first started doing drag. Like, she got caught stealing three dresses one time and had to go to court. Winona who? Meanwhile, Mayhem — who was apparently correct in assuming that India stole from her work station — was kind of a nervous wreck going into the challenge. As she reminded us, an improv challenge is what sent her home back in Season 10, and she was not about to let history repeat itself. (Except she did.)

BLAIR, CRACKER AND JUJUBEE | We knew some tea was about to be spilled the moment Miz Cracker mentioned feathers being ruffled, but nothing could have prepared us for the salty wrath she was about to unleash. Before writing a single word of dialogue for the challenge, Cracker confronted Blair St.  Clair about allegedly plotting with Mayhem to oust Cracker from the competition. Blair denied it, of course, but Cracker was not convinced. “Everything’s not 100,” she acknowledged, “but I also want to win this challenge.” Meanwhile, Jujubee was just thrilled to have a front seat to the drama, darting her eyes back and forth like she was at freaking Wimbledon. Then again, addressing that dirty laundry up front may have been the secret to the group’s success, because all three impressed the judges with their individual performances.

SHEA AND ALEXIS | “I don’t trust Alexis as far as I can throw her — and y’all know that ain’t far,” Shea said, but unlike Cracker and Blair, Shea opted to put on her “professional panties” and wait to address their personal drama until after the challenge was over. Of course, there was enough passive aggression between them to make up for that — like when Alexis joked that Shea was a lot like her “fake” character for the challenge, or when Shea drew parallels between Alexis and her own “hot mess” persona. Sadly, the tension between them didn’t translate into comedy, and their sketch was mostly laugh-free.

Overall, She-MZ (which should have been called Tea-MZ!) wasn’t my favorite challenge. I don’t know why Drag Race is making these poor queens do so much improv this season, but it’s really not most of their strong suits. I think we could all use a makeover challenge right about now. (And speaking of makeovers, am I crazy for thinking that the best part about this challenge was watching the queens doing their best TMZ bro impressions between scenes?)

This week’s “camo couture” runway tasked the queens with standing out… by blending in. Jujubee got things started with a dramatic cape moment; Cracker was feeling “sexy and strong” in a look that guest judge Sarah Hyland described as Ariana Grande meets Destiny’s Child’s “Survivor” video; Blair went for an earthier vibe, channeling the likes of Mother Nature, Poison Ivy and the iconic Grandmother Willow; Shea drew inspiration from the nosy neighbor trope; Alexis gave me Aiden Zhane flashbacks in her abominable drag queen getup; Mayhem gave us her version of a Barbie/G.I. Joe mashup; and India served us “video game vixen straight out of a movie,” which are actually two different things. But who am I to judge? 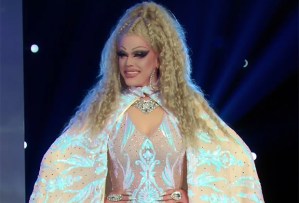 Cracker’s comedic performance and impressive runway look earned her a well-deserved win, while Mayhem and India found themselves in the bottom. No real surprises there. This week’s assassin, however, had everyone gagging. The moment Morgan McMichaels appeared on stage, we knew we were in for an unforgettable lip sync — and the queens did not disappoint. Cartwheels! Death drops! Sexual tension! Both Cracker and Morgan gave this Rihanna-themed battle their damn all, and I fully agreed with Ru’s decision to declare the whole thing a tie… meaning that both bottom queens could be going!

Alas, after Morgan revealed Mayhem Miller‘s name on her lipstick, Cracker followed suit and made it unanimous. (Man, India just refuses to go home, doesn’t she?)

Your thoughts on this week’s elimination? Drop ‘em in a comment below.