The queens traded their wigs for hard hats on this week’s Drag Race All Stars as they worked in teams to design and sell Ru-tique hotel suites — one made of gold, one inspired by The Golden Girls, and one… with a built-in golden shower.

But first, drama! While discussing Ongina’s recent elimination, which was basically a self-elimination, Miz Cracker was given a chance to explain why she messed with Ongina’s head in the first place — and her answer was not well-received.

“My intention was to say, ‘Ongina, I want you to believe in yourself because I need to see that,'” Cracker told the girls. “I went about it wrong. I should have said that, not what I said.” And Mayhem Miller wasn’t buying it for a second, saying, “I’m just going to be real — I smell shenanigans, foolery and some tricks and shows. It’s not feeling authentic.”

Cracker tried to shrug things off with an “All I can do is apologize and say I was wrong,” but Alexis Mateo merely saw that as an opportunity to join the madness. She pointed out that it was easy for Cracker to admit she was wrong after the fact, adding, “I want to get to know everybody for real. If I don’t trust you, I’m going to go against you.”

Fortunately, Ru showed up to hit pause on the drama — albeit for about 30 minutes — and gave the girls their marching orders. Let’s see how things turned out for them:

THE GOLDEN GALS’ PALACE | Shea Coulee, Cracker and Mariah Paris Balenciaga drew inspiration from The Golden Girls, complete with a 1980s Miami motif. I won’t lie, a small part of me was annoyed that they didn’t just call it The Golden Palace — which was the title of the Golden Girls‘ short-lived spinoff — but I just chalked that up to legal restrictions and moved on with my life. The room itself was turned out pretty cute, even if I don’t for a second believe that the queens painted that sunset-colored gradient on the wall themselves. As for the presentation, the judges rightly ripped these three apart for their utter lack of jokes, which are kind of important when you’re basing your room after a beloved sitcom. That said, I let out a decent chuckle when Mariah did her “girthy meats and cheeses” bit.

THE GLAMAZONE | Jujubee, Alexis and India Ferrah then took us into the rainforest via their Amazon-themed getaway. I understand what the queens were going for when they opted for green walls, but the ever-changing shades looked more like puke than paint. And while the ladies’ matching leopard-print dresses were a cute touch, why was Jujubee the only one not wearing black gloves? Maybe I’m focusing on the wrong things here, but that was dis-trac-ting. Then again, so was India’s uncomfortable golden shower moment, followed by… whatever Alexis did with that bottle of hairspray. Overall, it wasn’t quite as bad as the Golden Gals’ Palace, but there was definitely room for improvement. (Side note: When Jujubee initially suggested an “Alaska theme,” did anyone else think she was talking about Alaska Thunderf–k?)

THE 24 KARAT ROOM | Lastly, Mayhem and Blair St. Clair went in a slightly more elegant direction, fashioning a black-and-gold suite fit for an A-list queen. The room was cute, and the partners played off each other very well. I feel like Blair is really coming out of her shell this season, and I’m here for it.

Then… more drama! While preparing for this week’s runway, the queens reflected on their experiences designing and presenting their hotel suites. Cracker, who was feeling pretty down on herself earlier in the episode, said that working alongside her teammates helped her feel better about herself. “The people that I respect are Shea and Mariah and Juju,” Cracker said, to which Alexis responded, “So you don’t respect me?” This set her off. “A lot of girls talk behind your back,” she said. “I could be one of those girls.” She then vaguely suggested that there’s some sort of plot to get rid of Cracker. It was a lot.

RUNWAY | Speaking of a lot, the runway challenge tasked each queen with displaying “three looks in one.” Blair took us on a journey through time, going from her 1950s Sunday best to a 1960s Twiggy fantasy, and finishing up with a Studio 54-inspired metallic jumpsuit; Mayhem gave us a full hotel experience, from checking in to grabbing cocktails to taking a dip in the pool; Alexis paid tribute to the circus, entering as a high-fashion tent before stripping down to a ballerina dress and acrobat leotard; India served houndstooth couture realness in a full suit-turned-pantsuit-turned-leotard; Jujubee gave us three Halloween costumes, including a witch, Mrs. Claus and a sexy Easter bunny; Mariah took us out for a night in New York City, beginning at a party with friends and ending with an elegant transformation; Cracker told the story of Anastasia Romanov, hatching from a Faberge egg and evolving into elegant royal… on the run; and Shea went through a full rainbow metamorphosis, from larva to chrysalis to winged beauty. 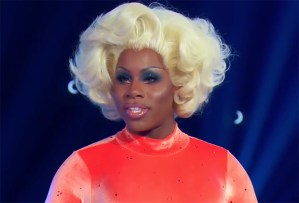 RESULTS | Jujubee was named this week’s top All Star, marking not only her first win this season, but her first win… ever! Meanwhile, Mariah, India and Shea found themselves on the other end of the spectrum, all up for elimination. (Remember last week when we were all ready to declare Shea the winner of the season? You never know what to expect on All Stars!) And even though Jujubee lost her lip sync to this week’s mystery assassin — none other than the sponge queen herself, Monet X Change! — we have to give her credit for delivering one of the funniest voiceovers in recent herstory while dramatically selecting her lipstick.

“What’s going through my mind right now is… I miss my cats,” she said. “They don’t judge me. Well, they do. But they have to live with me. I feed them. I also scoop their poops. I feel like I would be a crazy cat lady if I had one more cat. Two is enough… for now. Meow meow, bitches.” (Like, what?)

Then came the moment of truth: Monet took out her lipstick and revealed the queen going home this week is… Mariah Paris Balenciaga. Do you think she was the right contestant to get the chop? Vote below, then drop a comment with your thoughts on this week’s episode.