Miz Cracker might want to change her name to Miz Chief after the shenanigans she pulled on Friday’s episode of RuPaul’s Drag Race All Stars.

Right off the bat, the salty li’l thing announces to her fellow queens that she’s been up all night wondering whether she voted for the right person last week. “I feel I should have brought in some White-Out,” she tells the girls, none of whom prompted this shady confession. Turning to Ongina, Cracker then says, “Derrick [Barry] and Mayhem [Miller] believed they could do it, and you didn’t believe in yourself, and that’s an all-star thing. You are an all star, and you have to believe in yourself.”

Side-eyeing abounds as the queens attempt to figure out where the tuck this is coming from. And while Ongina appears too taken aback to stand up for herself, Jujubee has no problem summing up the group’s collective feelings about Cracker with three little words: “Go to bed.”

The shade continues when RuPaul asks last week’s winner, India Ferrah, to reveal which queens she considers her biggest competitors. She names Shea Coulee and Blair St. Clair with little hesitation, and all three are named team captains for this week’s maxi challenge, a show-stopping musical tribute to each of the queens’ celebrity crushes. India recruits Jujubee and Alexis Mateo, Blair snatches up Cracker and Mayhem, and Shea picks Mariah Paris Balenciaga; poor Ongina is then added to Shea and Mariah’s team by default.

The final product is… I don’t know… fine? The song is cute, but the costumes have no discernible connection to the crushes being mentioned, and only a few queens — including Blair, who opts to lust after Hannibal Lecter, and Jujubee, who invites John Stamos to fill up her house — actually make the judges laugh. The whole thing feels like a rough draft.

Fortunately, the contestants get a second shot to shine via this week’s runway, themed “Love the Skin You’re In.” Cracker embraces her inner “Jewish princess,” Mayhem hits the stage literally dripping (nay, oozing!) in glamour, and Alexis gets everyone’s attention in a leather dress designed in her skin tone. But no one commands the judges’ attention quite like Shea, who serves “Nubian goddess realness” in a skin-tight bodysuit that accentuates (and illuminates) all the right parts. It’s like a sexy biology lesson, and it earns Shea her well-deserved first win of the season.

India, Mariah and Ongina make up this week’s bottom three, and it’s immediately evident that this elimination is going to be dramatique. Ongina makes sure of that by breaking down in tears backstage, telling the group, “I have so much more to give, and I want to give it. I know I have the hunger, I have the drive, I want to be here so bad. But you don’t have to deliberate with me, because [neither India nor Mariah] deserve to go home tonight. This is not me giving up. This is the fairest thing to do.” In other words, while Ongina isn’t technically removing herself from the competition, she’s making everyone’s decision a lot easier.

Seeing Ongina in such a low place inspires Cracker to fumble her way through another faux-tivational speech. “A lot of winners start out in the bottom multiple times, and it’s not fair for anyone to say that it means you don’t have what it takes,” she tells Ongina. “I made your morning difficult a while ago, and it was stupid.” That said, Cracker also tells the camera, “Did I mean what I said? Absolutely. But does it help me to make Ongina feel bad? Does it help Ongina to feel bad? No. That’s the mistake.” (And this queen really wonders how she developed a reputation for being “difficult.”) 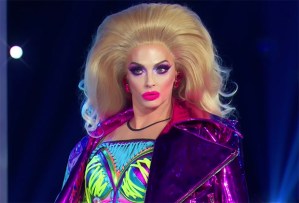 It’s now time for big Ru-veal! With $20,000 and a deciding vote on the line, Shea is joined on stage by none other than Drag Race legend Alyssa Edwards. Shea is understandably nervous about taking on such an esteemed assassin, but her nerves soon melt away as she effortlessly crushes the competition. (Side note: Shea absolutely killed this, but did anyone else expect Alyssa to put up a better fight? I’m not saying she threw the battle, but we’ve definitely seen more from her in past lip syncs. Something about this didn’t feel like the work of a true assassin.)

Which brings us to the moment of truth: “I think you are all unbelievably amazing and so talented,” She told the bottom three, “but he queen that I’ve chosen… is Ongina.” As she left the stage, India told her, “You were a giant, and I don’t want to hear anything different.”

“I’m disappointed that my time here is so short, but this is not the last that you’ll see of me,” Ongina told the viewers. “I promise you that. I’ll haunt you in your dreams, and my legacy will live on forever and ever. And ever!”

* How do we feel about Jujubee admitting that she voted to eliminate Mayhem last week? Jujubee says it wasn’t personal, but Mayhem isn’t convinced. (Cracker also doesn’t think Jujubee’s vote was personal, but I don’t seem to recall either of them asking for her opinion.)

* Is anyone else already picturing Shea’s picture hanging in the Hall of Fame? I know we’re only two weeks in, but she is bringing true winner energy to this season, and I’m here for it.

Your thoughts on this week’s elimination? The lip sync? Anything?! Vote for the queen you would have sent home below, then drop a comment with your take on the episode.