Ten sickening queens Ru-turned to the werkroom on Friday for a shot at redemption in the fifth season premiere of Drag Race All Stars.

Relive their entrances via the clip below:

We also got our first nibble of beef this week between noted Las Vegas nemeses Derrick and India, a feud that apparently involves India referring to Derrick’s boyfriend Nebraska as a “pig in a wig.” Derrick didn’t mince words with India, telling her, “You’re two-faced, and I don’t f–k with two-faced people.”

With an assist from extra-special guest judge Ricky Martin, RuPaul kicked off the season with the return of the traditional reading challenge. (Remember when Season 12 cheated us out of this joyful experience by burying its reading/shade challenge under a glorified commercial for FabFitFun? The nerve!)

As always, the queens performed at various reading levels (Ongina flopped so hard, Jujubee noted that “the crickets aren’t even laughing”), but a few queens stood out as being exceptionally literate: Jujubee referring to Mayhem as “Mayhem Filler” and “Meh-hem Miller” was inspired, India got personal by suggesting to Derrick that it might be time to #FreeBritney, and Blair paused her jokes to give everyone at home a chance to Google who India is. I can’t exactly argue with Ru for splitting the win between Jujubee and Blair.

For the season’s first maxi challenge, the queens were tasked with performing show-stopping numbers inspired by Drag Race‘s Werq the World Tour — yet another live experience this show is advertising that, due to the state of the world, fans are unable to attend. (See also: Drag Race‘s Vegas show and Broadway’s Frozen, the latter of which has since closed.)

Alexis got the party started with a “Bam!” by treating everyone to a high-energy dance number; Shea performed a pole-dancing routine that was both sexy and athletically impressive; Mayhem capitalized off of her infamous meme, even if her poor diction made it impossible to understand what she was saying; Mariah (aka “Miss Mariah Angelou”) stunned everyone with a powerful spoken-word performance, honoring all those who have stood up for their rights; and Cracker reintroduced herself as a glamorous pickle.

Both Blair and Jujubee then gave us emotional songs with impressive live vocals; Ongina, as a member of the season that started it all, performed a salute to Drag Race set to a medley of classic RuPaul bops; Derek gave us terrible impressions of Lady Bunny, Madonna, Cher and more, all while dressed like Britney Spears (shocker!); and India slayed with an original song to remind us all that “drag is not a contact sport.”

Before revealing the judges’ decisions, however, RuPaul had something tell the queens: All Star rules have been suspended… forever! Moving forward, Ru will choose one top contestant each week, and instead of lip syncing for her legacy against one of the other All Stars, she’ll have to do it against a mystery lip sync assassin. If the All Star wins, she will choose one of the bottom two queens to eliminate. But if the assassin wins, the bottom queens’ fate will be in the hands of the other All Stars, who will also get to vote each week. I know, it’s a lot — but once you let it sink in, it’s pretty epic.

OK, time for the rulings: After sending Blair, Jujubee, Mariah and Shea to safety, Ru announced none other than India as this week’s winner! (Given how well she performed, I’m in full agreement with Ru, but I’ll be honest — I completely underestimated India. She really is more than just “that girl who got picked up by Mimi Imfurst.”) As for this week’s bottom queens, which also totally make sense, that unfortunate title was shared by Derrick and Mayhem. 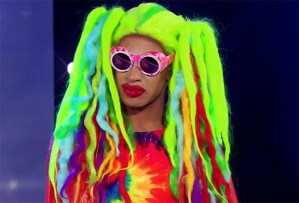 Dressed in a glittery floral normal, India returned to the runway, where she was greeted by the first surprise assassin: Drag Race Season 11 winner Yvie Oddly! (Something about those pants and shoes was a dead giveaway, but I was thrilled nonetheless when Yvie’s face emerged from backstage.) Facing off to the tune of Ricky Martin’s “Livin’ La Vida Loca,” naturally, India once again impressed me with her versatility, energy and commitment. She brought it. Unfortunately, her competitor embodied the idea of the song in a way that only Yvie could, earning Ms. Oddly a well-deserved win. (Fun fact: The $10,000 tip rolls over into next week’s challenge, making the stakes even higher.)

Yvie then revealed the name on her lipstick, sending Derrick Barry packing. Do you think she was the right queen to go home first? Vote below, then drop a comment with your thoughts on the All Stars 5 premiere.