13 Reasons Why returns to Netflix for its final season on Friday, closing the book on Liberty High School’s legacy of trauma and giving its characters what Devin Druid calls a “proper sendoff.”

“We were really fortunate that Netflix gave us the opportunity to have this many seasons and write an actual ending,” Druid, who plays Tyler Down, tells TVLine. “Not every show has that same luxury, so I’m really grateful.”

Not only is the show’s final season shorter than its previous three (with 10 episodes instead of the usual 13), but as Druid explains, it’s also “more of a departure from the other seasons, which had a central catalyst that motivated the characters. This season just takes a look at everything these characters have gone through, and the story comes from how they react to all of that. So it kind of goes the opposite way, which I think is really fun.” 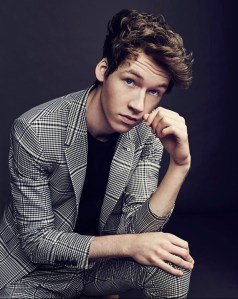 The show’s final season forces its characters to confront everything they’ve done, including the painful secrets they agreed to bury rather than work through. (As we saw in the trailer, the ghosts of Bryce Walker and Montgomery Cruz are among those still haunting the hallways.) For Tyler, facing his past may include taking responsibility for the time he brought an assault rifle to the school dance back in Season 2.

“We did see those guns being pulled out of the water at the end of Season 3,” Druid reminds us. “If something like that were to get brought back into play, that would certainly be traumatizing for Tyler. It would also threaten everything he has worked on and built towards in order to make things right. So he’s definitely worried about that. These characters have a few huge secrets that they’re trying to keep under wraps, so everyone has a lot to worry about.”

And while Druid can’t say how Tyler’s story will play out, he feels good about the progress that his character has made during the show’s four seasons. “Tyler doesn’t always make the right decisions, but he’s the first one to take the necessary steps to right his wrongs,” Druid says. “I’ve always appreciated that about him.”

What are your hopes for the final season of 13 Reasons Why? Drop ’em in a comment below.