Didn’t think 13 Reasons Why could deliver a moment more difficult to watch than last season’s infamous bathtub scene? Neither did I, so I guess we’re both wrong.

The finale picks up 10 months after the trial’s not-guilty verdict, followed by the arrests of Bryce and Justin, and it starts to feel like the Liberty High School community might actually be ready to begin the healing process — until Montgomery and a few of his fellow jocks assault Tyler in the bathroom, bashing his head against the sink, dunking his head in the toilet and forcing the handle of a mop so far up his rear end that it’s covered in blood upon removal.

It’s a scene that’s as difficult to watch as it is (arguably) unnecessary to show.

This heinous act inspires Tyler to bring an assault rifle to the Spring Fling and seek revenge against his assailants — as well as, I imagine, quite a few innocent bystanders. Fortunately, Clay is able to talk him out of it without anyone getting hurt; he even arranges for Tony to serve as his getaway driver if he agrees to hand him the gun, which he does.

With police sirens blaring in the distance, Clay is left holding Tyler’s gun, as Jessica and Justin join him to ask, “What do we do now?” (Film 13 more episodes of this show, I imagine.)

Before you weigh in on this finale, as well as the show’s second season as a whole, let’s see how things end for everyone else: 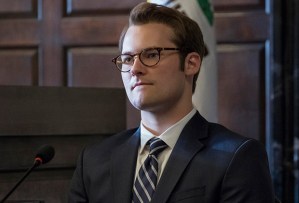 * Bryce is put on probation for three measly months. He’s also transferring to Hillcrest, where he’ll be a junior because not all of his credits will count. He doesn’t, however, lose Chloe.

* Mrs. Baker decides to move to New York. “It was always Hannah’s dream,” she tells Clay. “She never made it, so I’m going for her.” She also delivers what’s essentially the show’s thesis statement: “No matter how many reasons there might be why, there are always more why not.”

* Caleb surprised Tony at the Spring Fling, and it looks like those two are in it for the long haul. “You’re used to people chasing you, and you’re used to getting away,” Caleb says. “Well, you’e not getting away.”

* Clay’s mom leaves her firm in order to work with Dennis on similar cases.

* The Jensens offer to formally adopt Justin (who’s still totally doing heroin), and he tearfully accepts. He also hooks up with Jessica at the Spring Fling, even though she attends the event with Alex. Yikes. 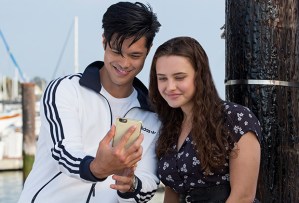 * Justin tells Zach, “You would have been really good for Hannah,” which is a lovely sentiment — except that he was with Hannah, and he totally blew it. So maybe he wouldn’t have been. Honestly, I keep going back and forth about my feelings for Zach, though I think his romantic scenes with Hannah might be my favorites of the season.

* Oh, and Clay finally has his semicolon tattoo finished.

* The episode begins with a powerful sequence in which the female characters — everyone from Hannah to the school’s defense attorney — give testimonies about their own experiences with sexual harassment and assault.

Grade the finale (and the season) below, then drop a comment with your review.