DC’s Stargirl is ready to shine on assorted screens, more than two decades after the young superhero made her DC Comics debut.

Geoff Johns, the veteran comic books scribe and screenwriter who recently served as DC Entertainment’s CCO for a stretch, created Stargirl aka Courtney Whitmore back in 1999, inspired by his late sister, who had died in the TWA Flight 800 explosion. With the character’s most prominent live-action incarnation, Johns’ vision takes on new meaning, in a series that is light, lively and abundant with star-spangled, family-friendly thrills.

“We all had a lot of fun working on it, and I’m glad that tone is coming through,” Johns said in speaking with TVLine. “We wanted to create something that was for everybody.”

Brec Bassinger (of Hulu’s All Night) headlines the series as Courtney, a spry teen whose life in Los Angeles is upended when her widowed mom, Barbara (Felicity‘s Amy Smart), remarries and in turn relocates them to super-quaint Blue Valley, Nebraska. Though Courtney is no insta-fan of stepdad Pat Dugan (Roadies‘ Luke Wilson) or his son Mike (Trae Romano), things literally brighten up when she discovers in her new home’s cellar a glowing staff that veritably calls out to her. Why has it chosen her, and does it have anything to do with the staff’s previous owner, Starman? Those answers and far bigger questions are addressed in short order, as the series unfolds on DC Universe (every Monday, starting May 18) and on The CW (Tuesdays at 8/7c).

Here, Johns details his development of the superhero series’ tone, some critical castings, and how the version seen on The CW might differ from DC Universe’s longer cuts.

TVLINE | My review likened Stargirl‘s tone to the old Walt Disney movies with Kurt Russell a la The Computer Who Wore Tennis Shoes, while I saw another site draw a comparison to Steven Spielberg/Amblin films. Is that what you were aiming for?
Yeah. You know, we actually held a screening of Back to the Future for the cast and crew before we started shooting, as kind of a kick-off party but also to show the talent what we all wanted — Glen Winter, the director, and everyone working on the show. It was really all about trying to capture that. I’ve said this before, but I loved those movies like Back to the Future, E.T. and Goonies, where they took something like time travel, which was only for genre fans, and made it super-accessible and an emotional story.

TVLINE | And set in, like, Anytown, USA, not New York or Los Angeles.
Yeah. And so I kind of say, what Back to the Future did for time travel and E.T. did for aliens, our aim was to do something like that for superheroes. A small town, grounded, family-oriented, fun, colorful…. That’s what we hope to do.

TVLINE | Had you been wanting to play with live-action Golden Age DC heroes for a while? Was that on a to-do list?
Forever. Ever since I wrote Stars and S.T.R.I.P.E. 20 years ago.

TVLINE | It’s really special to see those distinct costumes come to life.
LJ Shannon designed all the costumes, and we tried to stay as true to the lore as possible. But yeah, seeing the colors of Hourman, that gold, I love it. And I’ve always loved his hood. And Doctor Mid-Nite, Wildcat…. Seeing all of them kind of come to life is so much fun because it’s such a great, unexplored corner of the DC Universe. I mean, I wrote the book JSA for almost a decade and the thing I loved about it is that it was kind of “off to the side.” Like, they didn’t really reach deep into that world of the Golden Age. James Robinson did it in such a wonderful way with Starman and The Golden Age, and he’s been a friend of mine since I was 19, so I really wanted him to work on the show because he loves the Golden Age characters as much as I do. He always comes at superheroes from heart, like I try to. It was fun to work on the show with people that were just getting to know the characters as well as people like James.

TVLINE | What I like about the Golden Age costumes is they’ve got personality. Everyone is not in form-fitting spandex, and there’s utility to them, there’s character. That applies to the villains as well.
They’re utilitarian, like you said. Like, one of the things I love about Doctor Mid-Nite’s costume is there’s a lot of canvas and leather to it.

TVLINE | It’s a little steampunky.
A little steampunky, while Hourman’s feels a little more slick. They all have their own individual look, and hopefully if we get to do more seasons, we have ideas for some more characters to explore. There’s a couple that we haven’t shown this season. 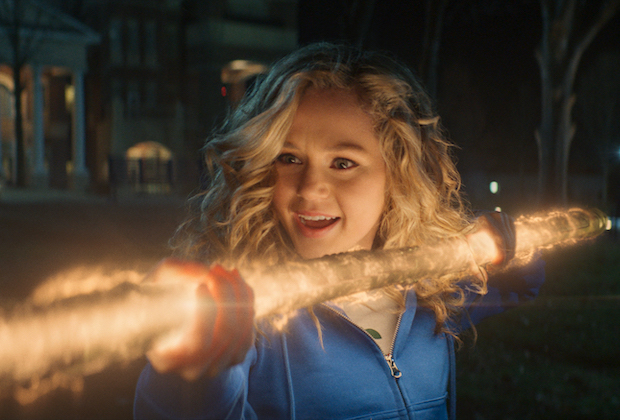 TVLINE | Talk about casting Courtney — who of course is a tribute to your late sister — and what ultimately gave Brec Bassinger the edge.
Rich Delia, our casting director, is wonderful. He did Shazam! and IT, so he’s really got a very amazing eye for young talent. We saw hundreds of really talented actors — really, really talented actors — but they had to have a specific mix of youth and power and humor and warmth to them that embodied Stargirl, because she’s so proactive. She’s like the opposite of a reluctant hero, she’s so enthusiastic.

TVLINE | She’s got spunk.
And I love that. I love that her drive is so powerful and she’s so ready to go in and so willing to do the right thing — and it gets her in trouble, which is an attribute my sister had a little bit. But I love that she’s fearless and fights for what’s right. I mean, she does it before she’s even Stargirl. That’s just who Courtney is. It was important to find somebody that could do that and still have a real warmth to her, because she’s not just going in there and be kicking ass. Her real superpower is seeing the potential in people — like [stepdad] Pat, who she tells in Episode 2, “You can do this.” And he’s never heard that before from anyone.

TVLINE | No, he’d actually been told the opposite — “Don’t you dare try to do this. Scram, you’re the sidekick.”
Yes, and the fact that she says it so matter-of-factly, not realizing how much that really means to him…. When he hears that for the first time, Luke [Wilson] gives her that wonderful look, where you appreciate how much that means to him. Her power is to find that untapped potential, and when we saw all these actors, right when Brec came on and read, she killed it. It was funny, it was heartfelt, it was real. She had that youth and energy….

TVLINE | And I feel like she’s nearly an actual teenager playing a teenager, not someone who is 25, 26.
She really sells it. Right when she came in, it was like, “That’s her.” That was it. 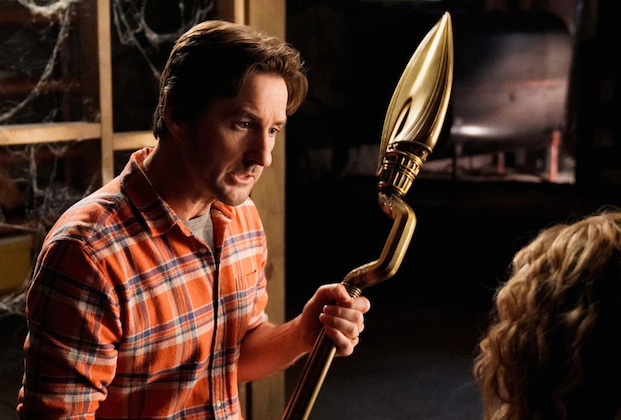 TVLINE | Luke Wilson is pretty perfect too, as Pat. How did his casting come about?
Ever since I saw Bottle Rocket, I loved, loved him, and when I was writing this I always envisioned Luke. Luke Wilson was Pat Dugan to me in every way, and I wrote it for him. I didn’t know him, but I sent the script to him with a note about the character in the series, and he read it, he liked it. And when we met, he came with all these hilarious ideas about Pat and [his son] Mike that are littered throughout the season.

TVLINE | Yeah, he seems all in on this role.
Oh, 100 percent, and he’s become an incredibly good friend of mine. I was in Atlanta the whole time during production, and we spent a lot of time together on and off set, and he’s just a wonderful guy, and he was so committed and so generous to everybody.  Brec and the kids, they all looked up to him, and that was a fun environment to be in because there was so much enthusiasm among everybody. Luke would always have ideas — like he suggested a different song for an Episode 2 montage, this Johnny Cash song, which is amazing and perfect for Pat Dugan. He got really into the character. 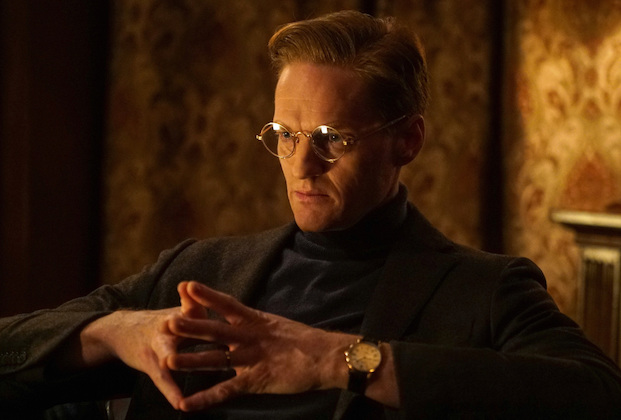 TVLINE | If anything made me uneasy about the first few episodes, it was the visual of adult male villains such as Brainwave whaling on this teenage girl, as Courtney starts learning the ropes. Was that a concern, “how much is too much”?
It was. I mean, look, this show was designed to be for families. When I was young, we watched Incredible Hulk and Knight Rider, and it was fun to watch shows as a family together. The DC Universe has done stuff that’s much more adult, but Stargirl and the JSA, they’re more traditional in the way superheroes are presented with good and evil and how violent or graphic you get. There was definitely a concentrated effort to make this accessible to everyone so kids could watch it with their parents or alone, or parents can watch it alone…. Hopefully there’s something for everyone. But at the same time, we want the stakes to feel real.

TVLINE | So, her getting her ass handed to her, and visibly bruised up, in the first episodes establishes very real and scary stakes.
Exactly, and we didn’t want to shy away from that. We didn’t want to shy away from the dirt and the blood at times because we do want the stakes to be real. We want the emotion to be real. We try and present a world that is different and heightened and obviously, you know, a little timeless in a way, but the stakes have to be real, not just physically but emotionally.

TVLINE | Lastly, how would you typify the edits you’re making to the DC Universe episodes to fit into 42 minutes on The CW? Because Episode 1, for example, appears to be almost 10 minutes longer on DC Universe.
Episodes 1 and 2 are longer on the DC Universe cut by like, eight minutes or something.

TVLINE | So what are you cutting?
Scenes. Scenes. Rather than “death by a thousand cuts.” Our pacing is extremely purposeful, and we like to keep it. We like to live in scenes, and we don’t need to have dialogue every second. We want people to react, and we want people to experience things with our characters rather than be told everything. So there were scenes that were dropped from Episodes 1 and 2, where we really focused on Courtney and Pat. But from Episode 3 on, they’re almost identical. You won’t be able to tell.

TVLINE | But the scenes missing from 1 and 2, it’s nothing consequential if someone can’t get to the DC Universe version?
Well, I think that they’ll be caught up on everything that they see from there. We had to make choices, but they should be able to catch up on everything. There’s some stuff that obviously we love, but you should be able to follow the show without any problem.