DC’s Stargirl is here to brighten up the sometimes-brooding superhero scene with a weekly, multiplatform rollout on DC Universe (starting May 18) and The CW (premiering Tuesday, May 19). But when all is said and done, will the gung-ho teen’s biggest adversary be oh-so-serious supervillains?

Brec Bassinger (of Hulu’s All Night) headlines the series as Courtney Whitmore, a spry teen whose life in Los Angeles is upended when her widowed mom, Barbara (Felicity‘s Amy Smart), remarries and in turn relocates them to super-quaint Blue Valley, Nebraska. Courtney is no insta-fan of stepdad Pat Dugan (Roadies‘ Luke Wilson) or his son Mike (Trae Romano), and she for no logical reason is banished to the “losers” table at her new school’s cafeteria, where she sorta meets outcasts Yolanda (Faking It‘s Yvette Monreal) and Beth (Tall Girl‘s Anjelika Washington). Courtney’s countenance literally brightens up, though, when she discovers in her stepdad’s cellar a glowing staff that veritably calls out to her.

For a short while thereafter, DC’s Stargirl is pure, contagious joy, as Courtney gets acquainted with her inanimate-yet-animated staff and all the tricks she can do with it. (Cue jaunty montage set to poppy music!) In fact, time and again when watching DC’s Stargirl — especially the first couple of episodes, out of the five I screened — it very much evoked the Walt Disney films of “old,” namely the ones in which college student Kurt Russell was accidentally bestowed with one power (invisibility) or another (supersmarts), and rightly geeked out. (Kids, ask your parents about Now You See Him, Now You Don’t.) The costume sewing process, almost always overlooked in such an origin story, here is played to great comedic, and logically sound, effect. 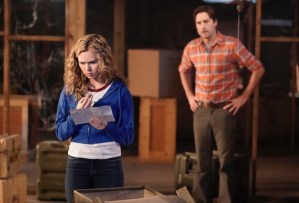 When confronted by Courtney with this fantastical find, Pat confides in her his past with the Justice Society of America, some of which is depicted in flashback in the series’ intense opening minutes. The Reader’s Digest version: A member of the Injustice Society years ago iced Starman (guest star Joel McHale), who may or may not have been Courtney’s dad. Pat, as the clumsily named “Stripesy,” was Starman’s hapless sidekick. Now, it would seem, Courtney is fated to pick up the star-spangled mantle, as injustice again begins to brew in the shadows of Blue Valley….

Things drag a bit in the second episode as Stargirl deals with the repercussions of accidentally blowing up a bully’s car (whoops!) and then faces off with her first supervillain. But the series gets a second wind at the very end of Episode 3, because after all there is no “I” in Justice Society of America. (OK, there are three, but you get my point. A team must be assembled!)

For DC comic fans, Stargirl is an abundant basket of Easter eggs, as a multitude of names are dropped, Golden Age backstories are touched upon, and at one point a green lantern gets shoved into a gym bag. Blue Valley is picturesquely realized as a Normal Rockwellian hamlet where the Main Street theater is a hallowed venue and folksy auto shops get framed in hero shots. (The series was shot in Georgia; no over-filmed, overcast Vancouver here.) The visual effects work — from the personality-infused Cosmic Staff to S.T.R.I.P.E. the robot (who, yes, gets his own training montage) — is solid and sometimes stellar, without ever being splashy. 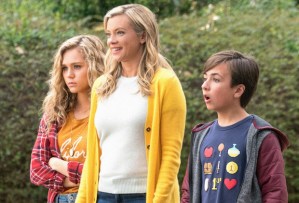 Bassinger and Wilson shoulder the lion’s share of the first episodes, as Stargirl gets schooled on the JSA’s rich history and then finds her own footing, and they are each pitch-perfect in their roles — respectively ebullient/plucky and prudent/dorky. Smart is also well-cast though Barbara isn’t given much to do at first, other than be vexed by Courtney’s fits of odd behavior; but slowly and surely, she is steered in the direction of danger. (As for stepbrother Mike: Akin to this Comedy Central bit making rounds, he can be a tad… bit… much.)

Here is what is more disappointing, though: They say a hero is only as good as his villain, and at first blush Stargirl’s adversaries are painted with the exact same brush — super-serious, stone-faced men. All sinister, no style. So in that respect, ISA get-togethers more resemble the Seven of Amazon’s The Boys. Also, Brainwave (Christopher James Baker channeling Willy Wonka‘s phony Slugworth), Icicle (Neil Jackson) et al are pretty damn ruthless, which is only an issue in that it clashes with the lighthearted tone of Stargirl’s own arc. (It’s also discomfiting to see grown men whale on/rough up a teenage girl. Fortunately, we eventually sense that some ISA members may be passing along legacies of their own.)

DC’s Stargirl gets off to a rousing, high-flying start, then loses some momentum when subsequent episodes open with deep-diving, Titans-style, -centric flashbacks. But by Episode 4, the stage is set for what is both DC Universe’s and The CW’s lightest, brightest, family-friendliest live-action superhero show yet.