Warning: The following contains spoilers for the explosive Season 3 finale of Station 19. If you’ve yet to watch, you might want to exit this recap as if someone has just yelled, “Fire!”

The bombs that went off over the course of Station 19’s Season 3 finale were mere pings compared to the emotional blowups that took place across the canvas. In the span of an hour, we got a breakup, a makeup, a hard-won epiphany, a heartbreaking split, hints of a relationship to be (as well as a relationship to be undone!) and, at long last, the truth about Andy’s mother. In other words, it was a five-alarm episode! 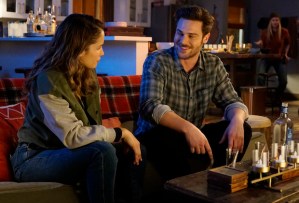 ‘ARE WE TALKING ABOUT IT OR DRINKING ABOUT IT?’ | As “Louder Than a Bomb” began, our firefighters were enjoying a night off by partying on Dean’s houseboat. (Pru was with his sister, in case you were wondering.) Though Maya and Vic had both just broken up with their hot doctor lovers, they were feeling no pain… at least not until the hangovers kicked in the following morning. Andy, on the other hand, could barely keep the smoke from coming out of her ears. She was ticked as hell that, without a word to her, Sullivan had gone to the Civil Service Commission, gotten himself suspended without pay and inadvertently delayed her father’s funeral. He hadn’t even managed to take down Dixon. So when her husband called, she didn’t just decline to answer, she tossed her cell in the corner.

The next day, when the firefighters were awakened by texts paging them to a five-alarm fire at Pac North, Dean was shocked to find on the pillow next to him not new squeeze Sasha (remember her?) but Vic. “You can’t just sleep in my bed — where’s my girlfriend?” he hollered instead of, “Aw, man, this seems 100-percent right! Finally!” Nearby, Andy discovered that after she’d chucked her phone, her Tia Sandra had called. Dammit! Oh, and Andy was married. She kinda forgot about that. And her husband was having scary surgery that morning at Grey Sloan. No fire for her. At Station 19, Maya was surprised by her dad’s arrival (though, after her mom’s revealing visit, I’m not sure why she would’ve been). Stay put, she told him. She’d be back. 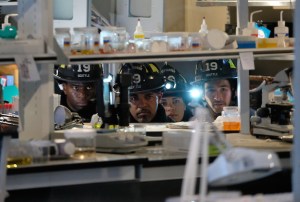 ‘I’M SILENTLY JUDGING YOU RIGHT NOW — BOTH OF YOU’ | At Pac North, Ben and Travis were sure that they could extract a big guy named Duncan from the MRI machine in which he was stuck. “How? I weigh like 250,” he said. “Well, that’s OK,” Travis replied, “because our job is to work out.” To distract Duncan, who felt terribly guilty about cheating on his wife before they were married, Travis confessed that he’d slept with someone while the guy had been engaged… and was still sleeping with him, even though he didn’t love him. “That’s cold,” even Duncan had to say. For his part, Ben admitted that he was a Judgey McJudgerson. “Oh, I could tell,” Duncan didn’t have to say. In the lab in the basement, a Dr. Elba refused to be evacuated unless the firefighters helped her save her lymphoma research and specimens. No sooner had they begun to grumble about being turned into movers than, right on cue, a blast went off that left Dr. Elba brutally pinned and the only exit blocked.

When Andy arrived at Grey Sloan to buoy Sullivan as he underwent surgery, she… pretty much just continued their earlier argument about her suspicions of her father. And she was so agitated and focused on the fact that Tia Sandra was now on her way to Seattle — adding to the intrigue, she’d said that she couldn’t talk by phone — that when Andy left the room, Amelia asked Sullivan, “Is she high? Drunk?” No, just spinning out. Still, he was sure that his bride would provide the support that he needed post-surgery. Less sure of that, and fearful that her patient might relapse, Amelia held a meeting for him right then, right there. In the basement lab, Dean discovered another bomb, and, since he’d trained with the bomb squad, he took over the scene. The explosions were occurring in a regular pattern, the firefighters noted. That meant that this bomb would likely to off in… oh, crap. Eleven minutes. It was too late to save Dr. Elba, but they could still save her research as well as themselves. All they had to do was get the bomb safely into the autoclave, a feat that Jack pulled off (rather than let Dean risk orphaning Pru). 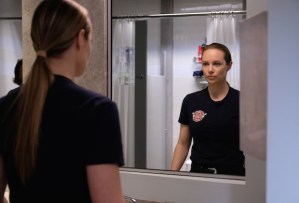 ‘SOMETIMES A BREAKTHROUGH CAN LOOK AN AWFUL LOT LIKE A BREAKDOWN’ | At Grey Sloan, Andy bumped into Mer and unloaded in a big way, recalling her most treasured memory, her “last fun day together” with her mom. “Now I think maybe she knew it was our last day together,” Andy said. “Now I think maybe she killed herself.” While Mer reassured her pal that she didn’t sound crazy, Maya’s dad showed up outside Pac North and began… well, he’d probably say constructively-criticizing her. When she refused to stand for his BS, he snapped, “Don’t raise your voice at me, young lady!” and pulled her back by the ponytail when she ordered him to scram. At last — her eyes were opened. After the final bomb went off in the autoclave, leaving all of Team 19 intact, Maya allowed herself a smile as she spotted Dixon being arrested for fraud and extortion. “Why,” she asked her crew as they emerged from the hospital with lab rats, “are we carrying rodents?” Because they’d saved Dr. Elba’s research, that was why. Back at the station, Maya symbolically cut off her ponytail. “Everyone saw the truth about my dad but me,” she marveled to Jack, who encouraged her to apologize to rather than give up on Carina. By the way, he added, “your hair looks kinda cool.” (And it really did.)

While celebrating his father’s downfall with his former colleagues on the houseboat, Emmett pulled Travis aside to drop the L word on him. Travis, though happy for his rabbit and his bright future, had to admit, “I am really sorry that I don’t love you back.” Bye, probie. At Grey Sloan, Maya approached Carina as she was getting coffee with Teddy. “Please take me back,” said Bishop. “I love you, and I’ve never said that about anyone before except my brother.” Unable to contain herself, Teddy beseeched Carina, “Oh my God, forgive her” for cheating. (Was Teddy hoping that Owen would do the same when it came to her and Tom?) In the end, Carina couldn’t resist Maya’s sincere pleas. She loved Maya, too. Yay, “Marina” lives on! Meanwhile, Jack checked in on Marsha and her new houseguests — and, unless I’m mistaken, had more than a casual interest in Marcus’ mom, Inara. Following the party on the houseboat, Dean shocked Vic — and horrified me! — by telling her that she needed to move out. He was thisclose to sharing the real reason that he wanted her gone but instead lied that it was confusing for Sasha and Pru. Bad Dean. Bad.

As the episode — and Season 3 — drew to a close, Sullivan woke up after his operation in terrible pain… and alone. Andy wasn’t there to offer ice chips, never mind comfort. (These two might as well have said “I doom” as “I do.”) So when a nurse offered the addict morphine, he didn’t so much accept as demand it. Where was Andy when her husband was writhing in agony? She’d taken off to reunite with her Tia Sandra… and, to her astonishment, her mother. She was alive! So had Pruitt been lying when he’d told Andy that her mom was “very sick”? Had she been mentally ill? What do you think? Grade the finale in the poll below, then hit the comments with your reactions to its multitude of twists before reading EP Krista Vernoff’s take on the episode here.