Judgment day arrived not once but twice for Station 19’s Sullivan in Thursday’s episode. First, he was called out by Ben over his dangerous lies, then he was made to tell all to Dixon. And, unfortunately for the battalion chief, there appeared to be yet another judgment day right around the corner — one that was going to hit even closer to home. What does that mean, exactly? Read on… 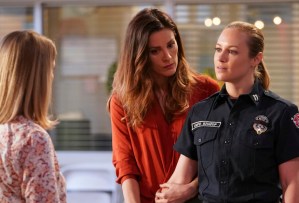 ‘IF YOU HAVE A PROBLEM, I’M STILL GONNA NEED MY COFFEE FIRST’ | As “The Ghosts That Haunt Me” began, the firefighters’ hilarious horror over their sexy fundraising calendar was offset by the return of one of their own. “I’m Andy Herrera,” said a familiar face. “I used to work here.” In Maya’s office, the captain tried feebly to resist necking with Carina. “We are on the taxpayer’s dime,” Bishop said halfheartedly, “and they are not paying you to make out with me.” Mid-kiss, they were interrupted by a surprise visit from… Maya’s mom?!? She seemed as sweet and mousy as her dad was volatile and ugly. After an awkward moment that suggested that Maya wasn’t out to her mom, Carina skedaddled, and her girlfriend learned the reason for Mrs. Bishop’s pop-in. “I left your father,” she shared. Immediately, Maya put up walls with a speed that would have made her a very popular contractor. “Did you come here just to badmouth Dad?” she asked. Not at all. Mom was there to apologize for allowing Dad’s abuse of their daughter to go on. “I was in crisis,” she explained. In response, Maya reverted to being the unfeeling hardass that she’d been starting to move beyond. “Wow, Mom,” she said. “Drama much?” With that, she took off with Team 19 for a bowling-alley fire.

Downstairs, when Dean finished helping a beautiful young woman named Sasha get an earring unstuck from her lobe, she bought a calendar and slipped him her number with the payment. When Vic pointed out how cute Sasha had been, Dean admitted that “I almost didn’t notice till she gave me her card.” Somehow — uh, maybe because they have undeclared feelings for each other? — this moment of levity turned into Vic thinking that her roommate was judging her for having moved on after Ripley so fast. (That’s OK, kids. You dance the dance. We’ll get there… I hope.) Nearby, Jack finally got Andy to reveal where she’d been holed up while mourning her father’s death: Sullivan’s. Her husband, Sullivan’s. “So just shut up about it.” Speaking of Robert, as soon as the firefighters had headed for the bowling alley, Ben cornered the battalion chief in his office. “I’m gonna need you to pee in a cup,” said Warren. Though Sullivan blew up like a puffer fish, Ben was not remotely cowed. Sullivan had committed two felonies and commanded multiple fire companies while under the influence, which, even if it wasn’t a felony, had to at least be a crime! 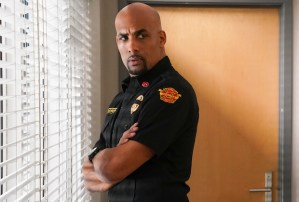 ‘I HAD TO STAY ALIVE FOR MY WIFE’ | Eventually, Sullivan revealed that he suffered from a chronic-pain condition for which surgery was a 50/50 gamble. Needing to buy himself time to weigh his options, “I made a serious mistake.” Gee, ya think? Ben pretty much said before making Robert pee in the cup in front of him and lashing out at the way he’d sent Pruitt to his death. Herrera was already on borrowed time, Sullivan pointed out. And he couldn’t have gone on the roof himself, because “I had to go in there to save my wife, and I had to stay alive.” Between Ryan’s passing and her father’s imminent demise, Andy had lost enough. When Sullivan’s drug test came back clear, Ben issued him a challenge: “You want me to believe you’re the man you think you are? It’s easy,” he said. “Just do the right thing — before I do it for you.” Of note, and this will be important later: Throughout the guys’ faceoff, we flashed back to a beer that Ben had once had with Pruitt, during which the late captain disclosed that the one time he’d gone numb on the job was when he’d seen a family of five killed by a drunk driver… a drunk driver that a cop had pulled over earlier in the evening and let slide because he was the mayor’s son. The cop, you see, had wanted the mayor to owe him. Where was that cop now? Ben asked. “He cashed in that favor.” (Now who does that sound like to you, and does it rhyme with vixen?)

En route to the fire, Jack was reeling from Andy’s wedding confession. “Crazy is two exes moving in together,” he said. “This is disturbing.” He wasn’t just razzing her, either. He thought that her marriage to Sullivan was a “massive panic-driven mistake,” a reaction to the news that her father was dying. “It’s not too late to get it annulled,” he added. (If she wasn’t glad they eloped before… !) At the scene, the firefighters learned that inside the bowling alley was the 70-year-old owner, Walter, and a kids birthday party. When Maya sent in her team to evacuate everyone, Emmett found that he couldn’t. (Cue Maya’s glare of death.) Inside, Dean did his best to save Walter, who’d somehow gotten stuck under a pin setter. Knowing he was toast, the old man encouraged Dean to leave him and go save the trapped partygoers. “I had my time,” he said. “Those kids haven’t even got started yet.” As fiery debris fell ever nearer to them, Walter asked Dean to tell his granddaughter to forgive her estranged father. Finally, Dean ran to get equipment but promised to return. “You better not, Dean Miller,” said Walter. “You better not.” And no sooner had Miller moved off than he heard another crash and Walter’s anguished cry. 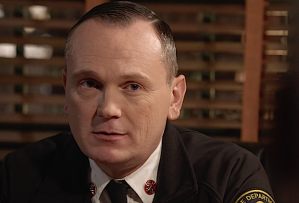 ‘IF NOBODY KNOWS, IT NEVER HAPPENED’ | Meanwhile, Andy and Jack found the kids huddled under a table in the arcade. Quick as they could say, “Let’s go,” the ceiling collapsed, blocking their only exit. “Time for my therapy session,” cracked Vic as she took a sledgehammer to an exterior wall in order to create a new way out. Inside, Jack, remembering too vividly being trapped in the skyscraper fire, freaked out, which only scared the kids more. To calm him, Andy admitted that OK, maybe it had been a mistake to marry Sullivan. Maybe she’d been thinking more about her dad walking her down the aisle than she had been the man she was walking down that aisle toward. She did love Sullivan, “but,” she added, “I’m terrified.” After the kids squeezed through the hole that Vic and Dean made, Jack refused to go through; he was sure he wouldn’t fit. So Maya, sounding as cold as her father, blew off Walter’s worried granddaughter and began swinging the sledgehammer herself. “Eyes forward,” said that poor, damaged soul. Once everyone was safe, Dean delivered Walter’s message to his granddaughter. Back at the fire station, Bailey arrived to find Maya’s mom helping set up for the spaghetti dinner to raise funds for Pruitt’s line-of-duty funeral. She also found that Ben and Sullivan were still barking at each other. “They each seem very convinced that they are right,” noted Maya’s mom, who’d heard the yelling from upstairs all day. After Bailey stepped into the fray, she asked Ben if he was all right. “I’m more than all right,” he replied. “I’m righteous!”

En route back to the station, Andy told Jack that she was going to advise Maya to bench him. Fine, he said. He’d add PTSD to his list of things to discuss with Diane. He was already talking to her about sex and love. Wait, said Andy, “are you talking about me?” And he was… sorta. He and the therapist (who I’m so glad it seems like we’ll see more of!) were discussing why he was only drawn to “women who can’t seem to love me back.” While they were laying their cards on the table, he asked if Andy had only said what she had about her marriage to calm him down. Yes… and no. “I’m a mess,” she admitted. Well, he knew exactly to whom she should speak. Diane? No. “Your husband.” Later, Ben and Sullivan arrived at Dixon’s office just as he was leaving. Rather than spare them a moment, he threw up his hands and said whatever, they could have a damn line-of-duty funeral for Pruitt. Only, of course, that wasn’t why they were there. “I need to report myself,” Sullivan said. He’d married Andy, stolen drugs and OD’d on the job. Big deal, Dixon replied. As long as nobody found out, he was in the clear. At that, a light bulb went on above Ben’s head — Dixon was the cop Pruitt had told him about, the one who’d cashed in that favor. Ben hadn’t oughta go there, warned the fire chief, unless he wanted Sullivan’s lapse in judgment to get painted as a PRT drug ring that entangled even Bailey. “You should stick to running into burning buildings, it’s a lot safer than ticking me off,” said Dixon, adding, “Sullivan, you owe me. I won’t forget that.”

‘PROBIE, GARLIC OR SUSPENSION… YOUR CHOICE’ | Back at the station, Maya, upon finding her mom still there and chatting with Carina, turned so cold, she could’ve launched into a chorus of “Let It Go” from Frozen. “Dad never laid a hand on us,” she huffed. That didn’t mean that there hadn’t been abuse, Mom replied. Maya’s father had made her walk 20 miles home from a track meet for coming in second, for God’s sake. Maya hadn’t come in second, she reminded her mother. She’d won, she just hadn’t beat her own time. But “I beat it the next time.” Poor, broken Maya. After she pulled away from her mom and her girlfriend, Carina approached her in her office. She understood denial all too well, thanks to her and DeLuca’s father. “I’m not in denial,” Maya insisted. “I won a gold medal because of my dad.” She was pissed was what she (thought she) was. As spaghetti was dished out downstairs, Dean took note of Vic’s calendar-girl picture (every scene, one step closer for those two!), and a riled-up Ben revealed to Miranda that he’d thought of the perfect way to honor Pruitt and his commitment to his values: “I’m gonna take down Dixon.” Go, Ben! Nearby, Sullivan filled in Andy on his eventful day and its outcome: “No one loses their job,” and Pruitt’s line-of-duty funeral had been approved. With that, he announced to everyone that he and Andy had tied the knot. “So this is sort of our wedding reception,” he said before whispering to his bride, “No more secrets.” As if!

So, what did you think of “The Ghosts That Haunt Us”? I’m not alone in shipping Dean and Vic, am I? How satisfying would it be if Ben did manage to destroy Dixon? And how heartbreaking is Maya’s denial? Hit the comments.