I’m calling it now: The Masked Singer competitor I think will take home the Golden Mask in Season 3 is Frog.

“But wait, weren’t you just telling us how Turtle should take it all?” you cry? Well, yeah. And I still think he should. But after watching the way the crowd and judges absolutely lit up at Frog’s ribbeting performance in the semifinals this week — just like they have every single time his webbed little feet have hit that stage — I think it’s no contest: The more entertaining act is going to win out over the one with greater vocal talent.

Support me? Wanna fight me? Cool. We can do that later. But first, let’s quickly recap the week’s performances: 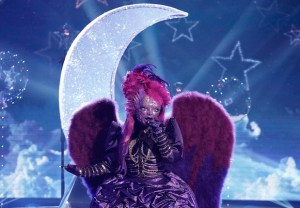 NIGHT ANGEL | This season’s last remaining female dedicated her performance to the Robot, which puzzled me for a minute until she started singing Lil Wayne’s “How to Love.” At first, I thought her climbing right up to the judges’ panel and singing to them was a nice change from the norm, but as the episode went on, I realized it was just the schtick o’ the week. Her clues included a soccer ball and a football and a crescent moon. (My guess: Real Housewives of Atlanta‘s Kandi Burruss)

TURTLE | Apparently Turtle has idolized judge Robin Thicke for quite some time, which is why he used so much falsetto  — Thicke’s signature move — in this week’s performance of Nick Jonas’ “Jealous.” Or something like that. Honestly, I was too disturbed and distracted by his faceless backup dancers to pay much attention to anything else during the number. But I did snap back to reality in time to hear him promise that he’s got “one more trick up my sleeve” for the finale. Intriguing! Clues: Marching band cap, Back St. and a diamond ring. (My guess: Summerland alum Jesse McCartney) 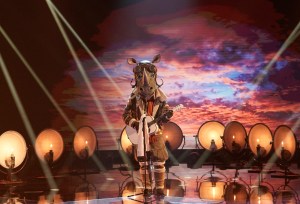 RHINO | Listen, Rhino seems like a good dude with a nice voice. But he’s turned in pretty much the same performance every week, right? Which isn’t to say that his version of Tim McGraw’s “Humble and Kind” wasn’t good, but if I’m right about who he is, wouldn’t it have been cool to have him actually play the guitar and therefore set himself apart from the rest? Also, wow Nicole Scherzinger cries easily, doesn’t she? Clues: Airplanes, a trombone, the number 9 and a baby rhino. (My guess: Former Major League Baseball pitcher Barry Zito)

FROG | As I referenced earlier, Frog’s performance of Naughty by Nature’s “Hip Hop Hooray” was electric. But how much of that electricity came from the song being highly supported by a huge production (that lighting design! those dancers in Heelys!) is tough to say. It’s clear, though, that Frog is a natural entertainer whose ability to get everyone on their feet covers for any vocal weaknesses, time after time. Clues: Basketball, rollers, Mom. (My guess: CSI: Cyber actor Shad “Bow Wow” Moss)

THE UNMASKING | Rhino was chosen to go home. When he was unmasked, he was revealed to be Zito. (Hear what he has to say about striking out on the silly singing series!)