By this point in The Masked Singer‘s third season, I feel pretty solid in my guesses about the contestants’ true identities. And if I’m wrong on any of them from here on out, I’ll eat a bug.

Oh, hold on: Nick Cannon already did it for me.

Yep, the diamond-shod host actually ingested a cricket at one point during Wednesday’s “Battle of the Sixes” episode, in which — thanks to guest judge/Masterchef host Gordon Ramsay — the remaining six performers offered clues in the form of food.

But whose clue was a chirping insect? And who ultimately got the boot? Read on for a recap of the hour. 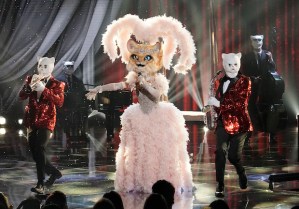 KITTY | The cat set a very high bar with the episode’s opening number, a gorgeous, start-to-finish-strong rendition of “Diamonds Are a Girl’s Best Friend” from Gentlemen Prefer Blondes. “I’ve been on many stages and played many roles in my nine lives,” she said during her clue package, while images of a red hood, a silver apple, a monkey with symbols and a record (titled “Mind Your Manners” by Seal Sisters) flashed on the screen. Her food clue: a gateau opera or opera cake, which just backs up my suspicions about her identity. (My guess: America’s Got Talent alum Jackie Evancho)

RHINO | In his set-up piece, Rhino revealed that he’s got “baby rhinos” at home, which I don’t remember him mentioning in the past. He sang Thomas Rhett’s “Die a Happy Man,” which was good but nothing spectacular or new for the Horned One. His food clue: spaghetti and meatballs, coupled with some puzzling narration. “My favorite dish, when I’m in rhino country, is cheese, spaghetti and meatballs. So now, is my name on the tip of your tongue?” If this is one of those acrostic clues, be a dear and unjumble it for me, will you? (My guess: Former Major League Baseball player Barry Zito) 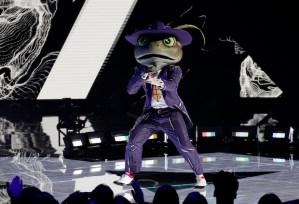 FROG | True to form, there was very little actual singing in Frog’s cover of Imagine Dragons’ “Whatever It Takes.” Also true to form, that didn’t really matter, so effortlessly did he have the crowd eating out of his webbed palm. His food clue: catfish. Based on the 23 jersey and other clues in the package, Robin Thicke guessed that Frog was Shad “Grown Bow Wow” Moss. I concur. (My guess CSI: Cyber alum Moss.)

NIGHT ANGEL | I admit, I laughed at the bit in the cold open when Night Angel complained about never being able to close her mouth. But I wasn’t laughing when she killed (in the good way!) Alannah Myles’ “Black Velvet” on stage a short time later. Her video hints included a white lighter, fish hooks and the numbers 285 and 2000. And she was the one who presented crickets as her food clue. I don’t know what that has to do with who she is, but that doesn’t mean I don’t know who she is. (My guess: Real Housewives of Atlanta‘s Kandi Burruss) 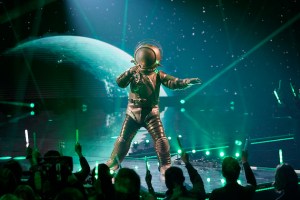 ASTRONAUT | This week, Astronaut took on “Story of My Life” by One Direction, which started shakier than usual but suddenly got really good at the chorus. His food clue: a king cake, like the kind served in New Orleans during Mardi Gras. And his other visual nods — four aces and a joker, a lobster, a hay bale, a paper airplane — all seem to point to the person we’ve been thinking it was for a while. (My guess: singer/songwriter Hunter Hayes)

TURTLE | I’m going to say it now: I hope Turtle takes it all and wins the Golden Mask this season. After all, he deserves it for this week’s performance of “Stay” by Alessia Cara, which featured some suh-weet boy-band dance moves. His food clue: chips with apple salsa. Is that even a thing? (My guess: Summerland alum Jesse McCartney)

THE UNMASKING | Astronaut was chosen to go home. When he was unmasked, he was revealed to be Hayes. (Go here to hear what the country crooner had to say about making one giant leap for mankind on the reality series.)