Season 3 of The Masked Singer was one small step for Astronaut, but a giant leap for the man inside the shiny suit: singer/songwriter Hunter Hayes, who left the show Wednesday. (Read a full recap.)

Taking part in the oddball music competition “gave me the chance to live two lives at once,” says Hayes, the wunderkind who performed on Rosie O’Donnell’s daytime talk show and America’s Most Talented Kids and is now a 28-year-old country artist/multiple Grammy nominee. “It was hilarious. Because I would head off first thing in the morning and do the show, and it blew the doors wide open.” 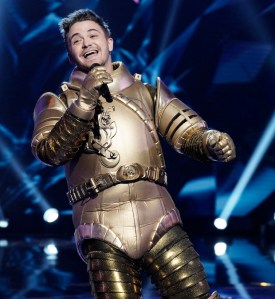 In a chat with TVLine Wednesday, Hayes explains how the time he spent in Los Angeles “was like a personal boot camp” in which he spent his mornings in Astronaut’s suit and afternoons writing songs for upcoming album, Red Sky. “It gave me a chance to clear my head and clear any boundaries I had set for myself, remove any filters that were still hanging on,” he recalls. “I would just come back to the house and start working on the album with a totally different perspective. There’s no other way I could have gotten that.”

Read on to hear Hayes’ thoughts on his run (including the number that nearly did him in).

TVLINE | The first episode you were in, I was tooling around online after, and people were immediately guessing you — which is a lovely testament to your fandom, but what was your reaction when you saw them guessing you so early on?
It was amazing. At first, yeah, your thought is, “Please don’t guess me.” Because the show was fun. I didn’t set any expectations. I had goals — I wanted to make it as far as I possibly could — but at the same time, I didn’t want to set myself up for anything. So every day was a gift, which drove my producers crazy. Because I was secretly competitive but also trying to enjoy it. But honestly, it wasn’t while I was taping the show, because you have no idea how people are going to react until the show airs. But when the show aired and people guessed me, honestly it was humbling. It was so reassuring, affirming, all those things. It boosted my self-confidence because it was like, they know me from anywhere. I can literally dress up in a costume, wear a mask and not say a word and still connect with music. It gave me so much renewed faith. It reminded me, I guess, of how you can still make a connection with music, even if you’re under a helmet. [Laughs]

TVLINE | A lot of your clue packages talked about wanting to distance yourself from things that had happened in the past and make a fresh start. What went into your decision to make The Masked Singer your fresh start?
I had just released part one of a three-part album series called Wild Blue, and I was going in to make Part 2. These are not concept albums, but the trilogy was meant that this is very much is a time of growth for me in my music, in my career, in myself. Part 2, Red Sky, is very much about change and moving forward and [the unknown]. Part 1 is more about dreaming about it, but Part 2 is about doing it. I knew we were going to spend the better part of this year in Los Angeles, whereas normally my home is in Nashville, Tenn. I knew that I wanted to travel to make this record because I had to be in unknown places and experience unknown things. [The Masked Singer] came up, and I was like, “Oh my God, how perfect is this?” It gives me a chance to work on the record.

TVLINE | What do your days look like right now? Are your days structured, with regard to songwriting?
I’m not structured at all. [Laughs] My team is, and everyone else around me is. I begged for them to be structured, because I have no structure. About a year ago, I had a little room in my house that was the studio. Then I decided, well, I’m a single guy. I’ve got this whole house to myself, and two dogs. Now every room in my house is a studio. My days right now are just wake up, breathe, and dive into music, which is brilliant. I’m doing the best with this forced quarantine and forced being off the road to say “OK, let me go finish this album.” We’re finishing it one song at a time, which is the way that I finished Wild Blue, and it’s been a brilliant experience. It’s allowed me to really dive in and make sure that this record is everything I want it to be.

TVLINE | Did you ever watch The Masked Singer in the same room as your dogs? Did they know it was you?
Ironically, I never did. It’s funny you ask. I never did. Most of the watching of the show that we did was out in L.A., and I couldn’t bring my pups on that trip, unfortunately. I should go back and watch it, or maybe watch it tonight with them. I wonder if they would figure out if it was me. Sounds like a fun game.

TVLINE | This is what we’ve come to in our quarantine: “This sounds like a fun idea.”
[Laughs] Yup.

TVLINE | Talk to me about the visibility in that helmet, which seemed like it gave you a better ability to see than your competitors’ costumes did.
There were trade-offs. The visibility was incredible. It was relatively easy to breathe in. But at the same time the sacrifice there was that because there’s a risk of people seeing your face, we had to cover it with this shiny material. In rehearsals, it was easy. When the lights came on, and there was a spotlight on you, everything was a disco ball. The only changes we made to the suit were based on movement. When I first tried it on, I was like, “Yeah, this is awesome!” Then when I got to the first day of dancing in the suit, I realized we had to make some major changes. I didn’t want to go all the way because I knew that going all the way would sacrifice the integrity of the suit… it was challenging, but I think that was a good thing for me, because I had to go from accepting what the suit wanted me to do to making the suit do what I wanted it to do. And learning that I could move, even though my instinct would get to a certain place and feel like I couldn’t move past that point, but I totally could. I just had to get used to that and get out of my head. Which, honestly, this whole show was about me getting out of my head, so…

TVLINE | Did you have any slight panic attacks during the performance?
“Shape of You” scared the s–t out of me. The steps that I was on were so easy. In rehearsal, it’s nothing. In my normal shows in the past, I run. I jump. There’s tons of stuff. So I wasn’t worried about it until we got into dress rehearsal with the lights and everything. I was so scared. That’s why there were two people on the staircase with me, because originally, they were supposed to help me down, because I couldn’t see the steps. That whole performance was really challenging. There were a couple of things there we had to change at the last minute just to keep me from falling on my helmet.