THE PERFORMANCE | Much has been made, and rightly so, of the way that Normal People dealt with its sex scenes, realistically but not exploitatively. However, Mescal, an Irish actor heretofore known only for his stage work, delivered in the series’ 10th episode what amounted to a solo act that was no less stunning in its intimacy and openness. If you’ve yet to finish your binge of the BBC Three co-production, you might want to stop reading here.

As for the rest of you, you’ll know what we mean when we say that, in portraying Connell’s downward spiral in the wake of Rob’s suicide, Mescal was nothing short of a revelation. He had his disconsolate character sit in his therapist’s chair as if reluctant to put any weight on it, lest it remind him that he still existed. Mescal spoke in tones so hushed, we could tell that every word stung with regret. And his body language… ! If Connell hadn’t already been reduced to a shell of a man, it was clear that he wished he could be as hollowed out as he felt.

Acting classes for generations to come are sure to study and dissect Mescal’s handling of Connell’s monologue, a gut punch of a lament about a new life that hadn’t lived up to the hype and an old one that had been comfortable, if not meaningful. For now, though, we’ll merely applaud, awestruck, and marvel at the emergence of a talent that is as real and raw as grief itself. 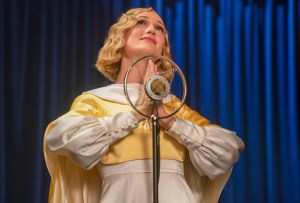 HONORABLE MENTION | We didn’t blame Penny Dreadful: City of Angels’ Tiago one bit for being taken at once with Sister Molly; we were, too. Kerry Bishé was divine as the radio evangelist whose painted-on smile and sunny demeanor masked a sadness that ran as deep as the scars on her wrists. Spinning every question into an invitation, the actress subtly reframed her character’s interrogation as a flirtation, one that revealed more about how uncomfortably Sister Molly’s halo rested atop her head than it did about her relationship with a murder victim. Whether it was a ploy or a cry for help is beside the point. The way Bishé tiptoed on the line between beleaguered saint and seen-it-all sinner, Sister Molly was always going to make a believer of the detective — and us. 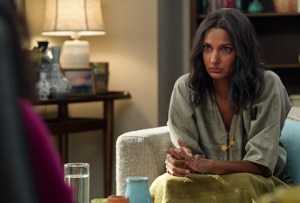 HONORABLE MENTION | For most of Never Have I Ever‘s first season, Nalini cuts an intimidating, quick-quipping figure in the life of her teen daughter, Devi. But that changes in the season finale, when a fight between the two headstrong females leaves Nalini emotionally adrift… and gives Poorna Jagannathan an excellent opportunity to show off her considerable talent. We loved the Episode 10 scene at Devi’s therapist’s office, when Jagannathan methodically dismantled Nalini’s gruff, demanding exterior and slowly revealed the scared woman struggling to keep it together after her husband’s sudden death. What gorgeous, delicate work Jagannathan did, allowing the tears to creep into Nalini’s voice as she admitted her sense of failure… and still landed a scene-capping sight gag with aplomb. Give this show a Season 2, Netflix, so we can see Jagannathan in action once more! 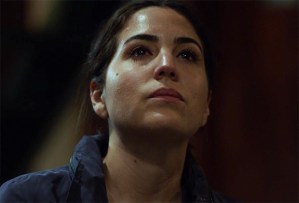 HONORABLE MENTION | Our hearts ached for the entire Blindspot team during Thursday’s season premiere, following the — spoiler alert! — tragic death of Agent Reade. But it was Audrey Esparza who stood out in the episode’s second half, seemingly squeezing every last drop out of her tear ducts as Zapata mourned her friend and onetime lover. Though Zapata hasn’t quite reached acceptance just yet, Esparza delivered a portrayal of grief that was so authentic and raw, we almost felt guilty as we watched her privately sob over Reade’s absence. Her anger at his death felt justified and earned; then, just as quickly as she’d gotten mad, Zapata pivoted to tenderness and regret, a transition that Esparza made look simple. Reade’s death may have been a devastating curveball for the show, but it gave Esparza the chance to do her best work of the series so far — and she seized it.