The following post contains major spoilers for Blindspot‘s final season premiere. If you haven’t watched the episode yet, avert your eyes!

If TVLine polls could influence the fictional events of television shows, Blindspot‘s final season premiere would have come and gone without a single character death. Earlier this week, we asked you to guess which character on the NBC drama might perish in the first episode of Season 5, following a drone strike that could have killed Weller, Patterson, Reade and/or Zapata — and most of you didn’t think any characters would actually die.

But, as revealed in Thursday’s heartbreaker of a premiere, it was Reade who lost his life in that explosion. Via flashbacks, we watched as the FBI team — sans Jane, who was already out of the safe house — tried to escape to the underground tunnels running beneath their cabin, having been alerted by FBI Director Matthew Weitz about Madeline Burke’s imminent drone strike. Despite the team’s hustle, though, the explosion left them pretty banged up, and Reade was ultimately crushed by debris after he shifted his weight a bit to facilitate Zapata’s escape.

Most of the episode, however, took place two months after the explosion. After keeping their distance from each other for eight weeks (very timely!), the team reconvened at a Cold War bunker in Prague, prompted by a New York City incident in which one of Jane’s tattoos suddenly appeared on Times Square’s digital billboards. They were also tasked with breaking Rich Dotcom out of the CIA black site where he was being held (which they did successfully), and they agreed to stick together in Prague until they’ve gotten revenge on Madeline. (Madeline, meanwhile, has hired a scary-looking team of mercenaries to find the rogue agents, since she feels that Weitz is “unmotivated” to do it himself.)

Below, series creator Martin Gero explains, among other things, why Reade was the premiere casualty and how his death prompts “amazing stories” in the final season.

TVLINE | Walk me through how you came to the decision to lose Agent Reade. Had there previously been conversations with Rob Brown about him leaving the show, or was this just the best creative decision?
It was a little of both. There were some business reasons why we needed to probably lose a lead character this season, and that started driving the conversation. And then creatively, we started to talk about who that would need to be. What would impact the story in a great way for the last season? As you get deeper into the season, I think you’ll see why it needed to be Reade for a bunch of reasons. His death plants a seed that ripples off into a bunch of amazing stories that we couldn’t necessarily do if someone else died. And they’re such a great cast. Everyone that was in the building that exploded came to me between seasons and was like, “Listen, if it’s me [who gets killed off], I totally get it. Let’s just make it cool.” Rob couldn’t have been more gracious about it. And this is a mild spoiler, but this isn’t the last we’ll see of Rob on Blindspot. The character is very much dead; it’s not a misdirect or anything. But we’re a show that occasionally does flashbacks, so he’ll still be a part of the season.

TVLINE | I’ll admit that I was a little skeptical that Reade was really dead, until I saw that death scene in the debris and realized how final it was. Was that part of the intention behind that scene? To make clear to viewers that he’s really gone?
Very much so. The reason the storytelling in that first episode is so non-linear is because originally, my instinct — which was immediately proven wrong by everybody [Laughs] — was to just pick up right there [with Reade’s death] at the beginning of the episode. And even just talking about how that scene would be, we were all just so bummed out. It was so rough and depressing, and we were like, “That’s a terrible way to start an episode, let alone a season. I don’t think we can recover from that.” The idea quickly became that we had to put it toward the end of the episode, because then we don’t have to rush it. We can give it the time — not only a whole act to show what happened, but then an act afterward — to really show them grieving about it. And they continue to grieve. 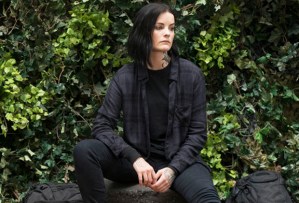 We got Mark Pellington, who directed the pilot, to come in and do this episode. It just felt like this is one we really needed to not f—k up. It needed to be one of our best episodes. And I’m into this show, I love this show, but I’ve never cried during a rough cut when I first watch the show. [Laughs] I just thought Audrey [Esparza, who plays Zapata] and Rob did such an incredible job. They all did an incredible job in that sequence, and I think it leaves no doubt that he is very much dead.

TVLINE | How did the cast react when they found out who died? Did any of them have warning before they got the premiere script?
I let everyone know [beforehand]. It’s complicated, but it was a decision we had made pre-pickup [for the final season]. We had talked about it like, “If there is a Season 5, this is how it will play out.” We pitched NBC this configuration of it. We wanted it to be our final season, we wanted it to be 11 episodes. This is how we wanted to go out. So, the second we got the pickup, I let Rob know first and then told the rest of the cast. Everyone knew from jump what was happening.

This season is about goodbye. It’s a long goodbye, and it’s about how finite the show is, and also how finite our lives are… It allowed us to elevate the storytelling in a way. The jeopardy that every character on this show is suddenly under really charges the show in an exciting way. And look, I’m not gonna single out a show, but there have been some shows that ended that maybe didn’t take as big a swing as people would have liked. And you’re trying to thread that needle of not killing enough characters or killing too many. [Laughs] It is a balance. But it’s an ending. And there’s no bigger ending than the death of a character to remind you, “This is ending for all of us.” That was the idea behind the Rob of it all.

TVLINE | Should we be concerned about Zapata moving forward? She’s obviously got the support of the team, but it doesn’t seem like she’s in a great place, emotionally, during this premiere.
They’re all dealing with it differently. We’re doing some interesting stuff with her storyline, and what it’s got to do with her grieving for Reade. In some ways, it’s really nice, because this is probably the highest-stakes season we’ve done, it’s got the most conflict in a season that we’ve done — however, because there’s so much external conflict, it really has allowed us to eliminate the interpersonal conflict with the team, which, to be honest, is what our audience wants. [Laughs] They hate when our team isn’t getting along. This allowed us to have incredible unity among the surviving characters for the rest of the season. It’s actually our most hopeful and most emotionally uplifting season in a lot of ways.

TVLINE | Let’s talk about Madeline Burke a little bit, since she’s only gotten more powerful in this episode. Is it fair to say she’ll be wreaking havoc for all 11 episodes of this season?
Yeah. She is our Big Bad this year, that’s for sure. We’re not going to be back on the FBI sets in Episode 3. This season is about us clawing our way back, so much so that we had to build this enormous Prague bunker. Which is not a thing a show usually does in its fifth and final season! But we needed a brand-new home set, you know? Our art department team, which is incredible, built this phenomenal bunker for us to film in because that’s going to be their home for most of the season. 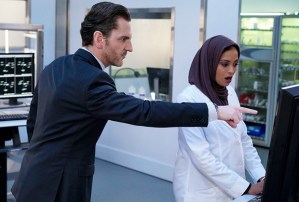 TVLINE | I’m also really loving Matthew Weitz’s dynamic with Afreen in this episode. But can we trust Weitz right now?
I think you can! We now have such a long and complicated relationship with Weitz. He started off as a bad guy that was kind of a good guy, and then he was a bad guy again, and maybe he’s a good guy now. It became clear to us as we started breaking stories that we needed Weitz to play a much bigger role this season because he’s got the physical proximity to Madeline. And not only that, but him and Afreen — we needed to have a resistance inside the FBI. They play a huge part over the entire season.

TVLINE | I’m going to jump very far ahead now, but since you’ve wrapped production on the show already: Give me your best teaser for the series finale.
It is our biggest episode since the pilot, but not for the reasons you’d think. [Laughs] Because of how logistically complicated it was, we actually shot that final episode off and on for two-and-a-half months, kind of in between all of the episodes — and again, I think you’ll see why. It is a very loving episode. When we sat down and said, “What are the things that we want to see out of a finale?,” we were able to hit almost all of the things. The finale is action-packed. It’s also filled with an enormous amount of heart and emotion and ends, in my opinion, in an incredibly satisfying, full-circle way. I think it’s a really unique episode.

[The final season] is designed as a thank you to our fans. I know that sounds weird, because we are killing some characters. But emotionally, the show is going to be incredibly fulfilling this season. It has some high highs, it has some low lows. But this is uncut Blindspot. [Laughs] The fact that we were only allowed to do 11 episodes instead of 22 — the season flies by. Everything you love about the show, you’ll get to live it one last time as we say goodbye.

Your turn! What did you think of Blindspot‘s final season premiere? Did Reade’s death take you by surprise? Grade the episode in our poll below, then hit the comments with your reactions!