The theme of Sunday’s Penny Dreadful: City of Angels might well have been dangerous liaisons. The episode included not only a “What are the odds?” run-in with a demon at the beach, a chance meeting with the smoothest of criminals at the hospital, and a police interrogation that could easily have included among its questions “Do you wanna go steady?” but an encounter with Nazis that left two characters modeling toe tags (yes, already!) and a brush with Santa Muerte that brought a certain someone back from the brink of death… or did it, really? Read on, and I’ll explain why I’m not sure. 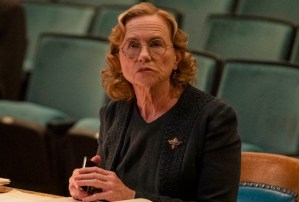 ‘WHO GOES TO THE TROUBLE OF MURDERING SOMEONE SO BORING?’ | As “Dead People Lie Down” began, an injured Lewis encouraged Tiago to go home rather than pass by the boys in blue outside the hospital following the riot. When they see Detective Vega, his partner warned, “those mother—ers only see a brown face.” As if to prove Michener right, Tiago was spat upon by a uniformed police officer, then scolded by Vanderhoff for even asking how many Mexicans had been killed. But Lewis was proving again and again that he was someone that anyone, certainly Tiago, would want in his corner. Though he knew damn well that it had been Raul who shot him, Lewis told Vanderhoff that he didn’t have a clue. What’s more, he told Tiago in no uncertain terms, he hadn’t seen, either. If they weren’t partners before, they sure as hell were now. When Tiago checked on his brother, he was informed by the doctor that he wasn’t so much alive as being kept alive; in a couple of days, he’d have to be taken off the respirator. Not a problem, said Maria. She was sure that he wasn’t going to die. If he did, however, “you are not a part of this family,” Mateo told Tiago, who only he knew had pulled the trigger to save Lewis.

In the hospital cafeteria, Vanderhoff applied pressure to Michener and Vega; City Hall needed the Mexican uprising shut down. So their first order of business, said the captain, was resolving rather than solving the Hazlet case. He wanted them to bring him a Mexican head on a plate, any Mexican’s head. Since Hazlet was said to be a squeaky-clean choirboy, “maybe,” suggested Tiago, “we oughta check out the choir.” At Sister Molly’s Joyful Voices temple — which brought to mind The Leftovers’ Guilty Remnant but with more splashes of yellow and less chain-smoking — the radio televangelist’s mother, Miss Adelaide (Amy Madigan), tried but failed to put up a roadblock to the preacherwoman. Lewis distracted Mom, letting her try to pin the Hazlet family’s murders on Mexicans and rant about how everyone at the temple was sanctified by the blood of the lamb, so that Tiago could sneak off and poke around. What he found was Sister Molly, playing to a packed house and giving a crazy charismatic performance. As anyone would’ve been, he was smitten by the time she was through. As he and Michener left, the older detective shared his theory that the case was BS. Between the carved faces of the victims and the writing in blood, it was obvious that it was a con. Having been distracted, he and Tiago had forgotten to ask who had something to gain from Hazlet’s death? 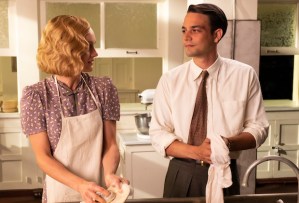 ‘EVERYONE LIKES THE TUNES’ | Later, Tiago snuck back into the temple through the kitchen, where he introduced himself to Sister Molly and helped her do the dishes as he questioned her. (Is it just me, or was Daniel Zovatto and Kerry Bishé’s chemistry so far off the charts in this scene that the show is gonna need to get bigger charts?) While she didn’t have a whole lot to say about Hazlet, she got a little sketchy when Tiago noted that she’d called the deceased deacon tall. She’d, um, meant, er, as in upstanding. Yeah, that’s the ticket. She had a much easier time talking about her career, which she said her mother had basically started for her, throwing her into the revival circuit as early as age 4 to perform in Lullabies of the Lord. Still, her motivation was based, at least now, on faith, not fame. “Have you been saved, Detective?” she asked. “Are you offering?” he replied. (Chemistry. Through. The. Roof.) That evening, they were still talking. (Hey, ya don’t walk away quickly from sparks like that.) She admitted that, following the death of a boy whose mother had begged her to heal him, she had had to do a show. After it was over, she’d gone home and slit her wrists. Tiago, in turn, confessed that he thought he’d seen Santa Muerte when his father died. “If your brother dies, you come to me,” she said… just before Miss Adelaide interrupted and proffered a lawyer’s number for Tiago to dial if he wanted to speak to her daughter again.

Meanwhile, Alex (you know, Magda as a frump) put in Townsend’s head that he should have Goss build the Arroyo Seco and look at the four cops killed in the riots as less of a tragedy than an opportunity. “What people need,” she argued, “is a champion to channel their fear into something constructive like motorway.” And they wouldn’t be exploiting the deceased, they’d be, um, honoring them, for the sake of healing. Sold, Townsend used an Officer Maynard West’s bloody uniform shirt, as well as his widow, as props at his next press conference. The Mexicans shot first, Townsend lied. “They had no mercy, and we can show none to them.” Therefore, the motorway they so despised would henceforth be a pathway to the future, one named after Officer West, if the politician had anything to say about it. In other goings-on, Peter “just happened” to run into Elsa (Magda as a doe-eyed fellow German expat) and son Frank (who you’ll recall isn’t real) at the beach. Playing the pediatrician like a fiddle, she explained that she’d never really loved her American husband. But after WWI, “he had food, and I needed food,” simple as that. If only Peter and Elsa could make their dream of sailing away to Tahiti come true… Since they couldn’t, he merely fantasized about the she-devil as he was having sex with his wholly displeased wife, Linda (Piper Perabo).

Best Drama Series of the Decade

‘YOU’RE A PACHUCO, BABY’ | Back at the hospital, Mateo, torn up about Raul, was just trying to get a damn pop when racist-as-f— Officer Reilly roughed him up and threatened to take his eye like his partner’s eye had been shot out. Thankfully, they were interrupted before any peepers could be popped by Fly Rico and the click of his switchblade. After he scared off the cops, he bought Mateo a soda and invited him to meet up at a club called The Cat. How come? “You didnt scream” like Reilly wanted, Fly Rico said. In other words, he was Pachuco material. That night, Michener and a few pals (including Richard Kind and Insidious mainstay Lin Shaye) did some Nazi hunting in hopes of stopping the Third Reich from taking over the United States. That a buncha old farts could pull it off, they knew was unlikely. But what else could they do? As Michener put it, “you think Hoover gives a s— about the Jews?” Ultimately, while two of the guys followed a couple of known Nazis — Goss and henchman Kurt — Lewis and Dottie (Shaye) tailed the Cal Tech student with whom they’d met… to what looked like Sheldon Cooper’s physics lab, only a sign warned that it was full of explosives! As the episode drew to a close, Kurt simply pulled his car to a stop in front of Lewis’ friends, shot them in cold blood and sent their car toppling over a cliff! At the hospital, Maria wept to Santa Muerte until, finally, Raul’s body disappeared from the bed in which it had been lain. His mother then followed a trail of blood droplets to… well, hello! Raul, standing, bleeding from a head wound and looking for all the world like an exceedingly fresh zombie.

So, what did you think of “Dead People Lie Down”? Hit the comments with your reviews, observations, theories… the works.